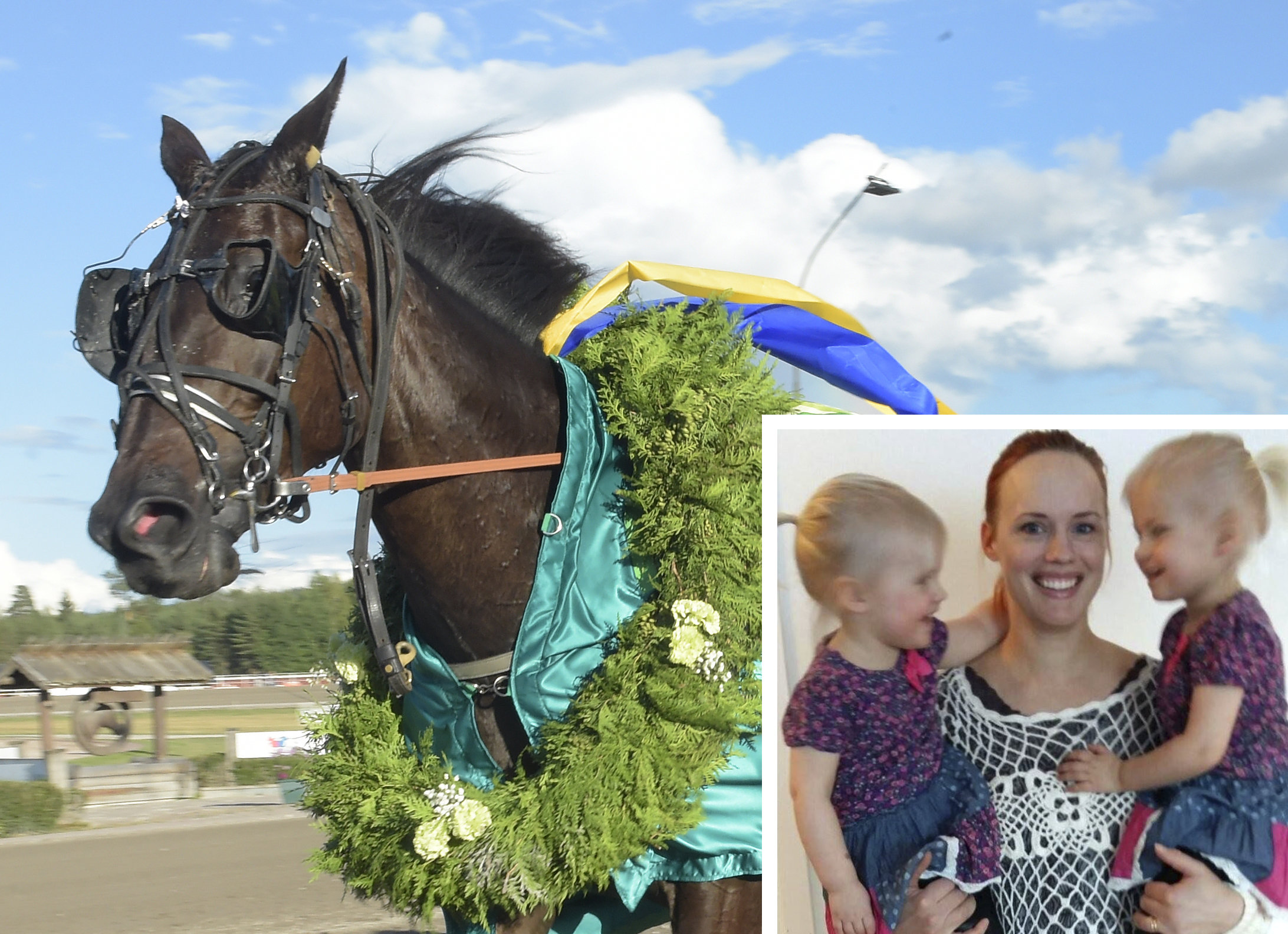 A driver to trust.
Back in the spotlight again after giving birth to four children.
Anna-Karin Jonsson from Sundsvall is getting ready for the final of the Swedish championships for female drivers at Eskilstuna this Wednesday and is happy getting the chance to drive Raja Ribb.
"He just jogged when we won the elimination".

The children have arrived at a quick pace for Anna-Karin Jonsson and the horses have played second fiddle.
Four children in seven years - twin girls in 2013 - is the result when her and husband Jimmy Jonsson decided to start a family. With the youngest one being two years old the couple have made it back to working full time again - for Öystein Tjomsland at his Swedish stable at Bergsåker.
"It's full days for sure, but I didn't want to let the horses go. They're way too much fun" says Anna-Karin Jonsson.
Before becoming a mother she both drove and rode quite a bit and she was a popular driver. Anna-Karin Jonsson grew up in the northern parts of Sweden and moved down to Sundsvall for work when working for trainer Lars I Nilsson. She has also worked for Ulf Ohlsson.
After a few years with almost no results and very few drives, the stats are starting to look better again. Anna-Karin has four wins, one second and one third in ten drives this year.
Three of the four wins are with father in law Alf Jonsson's cold blood mare Granetta. In July she got the chance to drive Gävle trainer Kristofer Jansson's Raja Ribb in an elimination for the Swedish Championships for female drivers at her home track Bergsåker.
"He's very quick behind the gate and I took the lead and went on to win very easily. He just jogged as they say. A very nice horse".

Same feeling as with Airstrike
Eskilstuna's V86® comes with a super jackpot where a sole winner can take home SEK 18 million.
4 Raja Ribb in V86-7 is a horse that has to be on the ticket. He will be one of the most bet horses in the 2018 Swedish Championships for female drivers with SEK 100,000 to the winner.
Anna-Karin Jonsson has 47 wins in 545 career starts and has twice before tried to become the Swedish lady champion. Her best result is a third place so far.
"My best chance would have been Airstrike back in 2005. We won the elimination but then I was suspended for the final so I never got that chance. I had a really good feeling back then and I have the same feeling this year. Raja Ribb won his elimination very easily and drew a good post position in the final. I'm looking forward to Wednesday".

Surprised in the final of sommartravet
Gävle trainer Kristofer Jansson bought six year old gelding Raja Ribb at an internet auction when the horse was three years old. He then had one win for his breeder Lutfi Kolgjini.
In Jansson's care Raja Ribb has won twelve times - the last one worth SEK 300,000.
Tomas Pettersson drove Raja Ribb to victory in the final of Sommartrav®et, part of V75® at Rättvik. That is the biggest win in Jansson's training career so far.
"He has improved ever since he came to us. I felt right away over the first winter that this was a good horse. I just have to get him to quit galloping the way he did as a three year old. He was really good in his last start at Rättvik and if I know my horse right, he'll be even better on Wednesday" says Kristofer Jansson.

Raja Ribb was in very tough in the Sommartravet final and beat a couple of very good horses. But he'll be even better this time?
"He has shown that he's at his best after just having gone all out. He's not like other horses where they can be weak mentally after being 'emptied' in the race before. Before his last start he had gotten three easy races in a row and been locked in. Last time he had to go 'all out' which makes me believe that he'll be even better now".

Pleased with having Anna-Karin as your driver?
"She drove him very well at Bergsåker. He's not a difficult horse to drive but she's used to driving cold bloods so she can drive. He's gotten even better since we put a googles bridle on him lately and she'll have to try to get him to the lead where he has taken 12 out of his 13 career wins. He'll race in the American sulky and barefoot again if the track allows it".

Your worst opponents?
"Both 2 Tropicana Ås and 3 Visa As have raced great - it turned out to be a tougher race than I thought. But he beat good horses in his last start too. With the form and development he's shown, I think he should have a good chance".