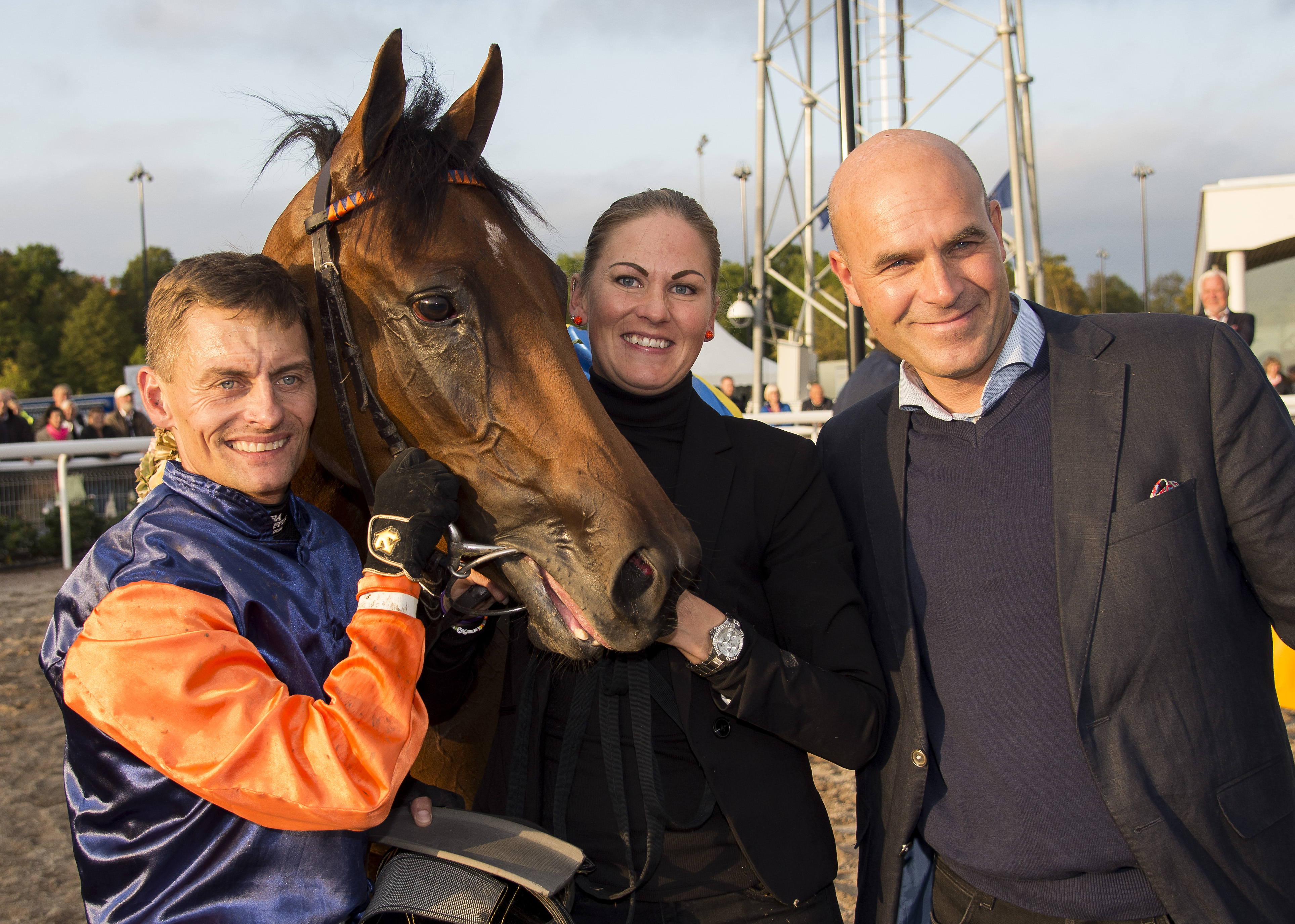 Dorcia upset in the Stockholm Cup.
A historic victory.
First Swedish trained winner of "the Cup" since 1994 and first victory ever by a three year old filly.
"It's a dream come true. Now I feel a bit empty but I'm super happy, super happy" said a clearly touched Lennart Reuterskiöld Jr moments after his big victory.

Biggest race for a Stockholm guy
The win against the older elite is a historic one - never before has a three year old filly won this race who used to be ridden at Täby Galopp, but since last year is being ridden at bro Park.
The Sunday victory was worth SEK 800,000 and that means Dorcia has now made SEK 2.7 million in her last three starts.
"Stockholm Cup is the biggest race you can here in Stockholm and as a Stockholm guy I'm of course ecstatic. She impressed me. I watched her from aside as she won the Derby and the Oaks and saw her impress against horses her own age. I had a questionmark about how she would fare against older, but of course I have faith in the trainer who told me she would be good enough and she showed us that today" said the winning jockey Per-Anders Gråberg.
" I don't know last time a mare won this race and last time a three year old did it must be over 20 years ago. It's a fantastic effort by a three year old filly to beat the older elite. When I raised my hands and asked her for a little more the last 400 meters, she just flew down the stretch. She was very, very good."
Two three year olds have won the Stockholm Cup: Mr Eubanks in 1994 and Appel au Maitre in 2007. Mr Eubanks was also the only Swedish trained winner until now.

Tinnitus for Gråberg
Bro Park Sprint Championship gave us an exciting battle down the stretch, where Tinnitus with Per-Anders Gråberg held on by the smallest of margins before Captain America. Captain America who after a very slow start finished the race very well and came closer and closer to Tinnitus but had to settle for second and SEK 120,000. The victory was worth SEK 360,000 for Tinnitus and the winning trainer is Niels Petersen.
"We did it in Norway and we believed we could do it agan today. He has a big heart and he fought all the way to the wire" said Per-Anders Gråberg.
Niels Petersen also won the Galatea Turf Mile Final (GS75®-2) where his Busybeingfabulous won easily for jockey Alan Wallace.

Another impressive three year old filly
GS75 kicked off with Tattersalls Nickes Minneslöpning with only three horses in the field and it was a comfortable win for Brownie ridden by Oliver Wilson. Brownie is trained by Bent Olsen and the victory was worth SEK 360,000.
GS75-3 was the Lanwades Stud Stakes for fillies and mares and here we got to see another three year old filly win, Seaside song ridden by Carlos Lopez. They made SEK 300,000 and Seaside Song is trained by Lars Kelp.
In the GS75 finale we witnessed a huge upset when Red Hunter won for trainer/jockey Madeleine Smith.
GS75 paid for all seven winners: SEK 376,367, for six: SEK 1,249 and for five SEK 112.