7 Guli Orkan has won four out of eight races this year and has done very well for the new trainer. Can do it tough and will probably get an offensive journey. 5 Stjärnstorm wins often but faces tougher opponents now. Won directly for the new trainer in his comeback. Early contender. 14 Järvsö Nilsingemar is fast and likes this short distance. Won despite a double mistake in the last run. 9 Hornnes Tore does not win very often but has earlier challenged the favorite and is in great shape.

Lollo Trot impressed in one of the eliminations to the 'short E3' for fillies. On Saturday, she is one of the favorites to win the final and the SEK 1 million first prize in V75® at Örebro. "I think she has a good chance – she keeps getting better and better" says trainer Raoul Engblom.
Read more 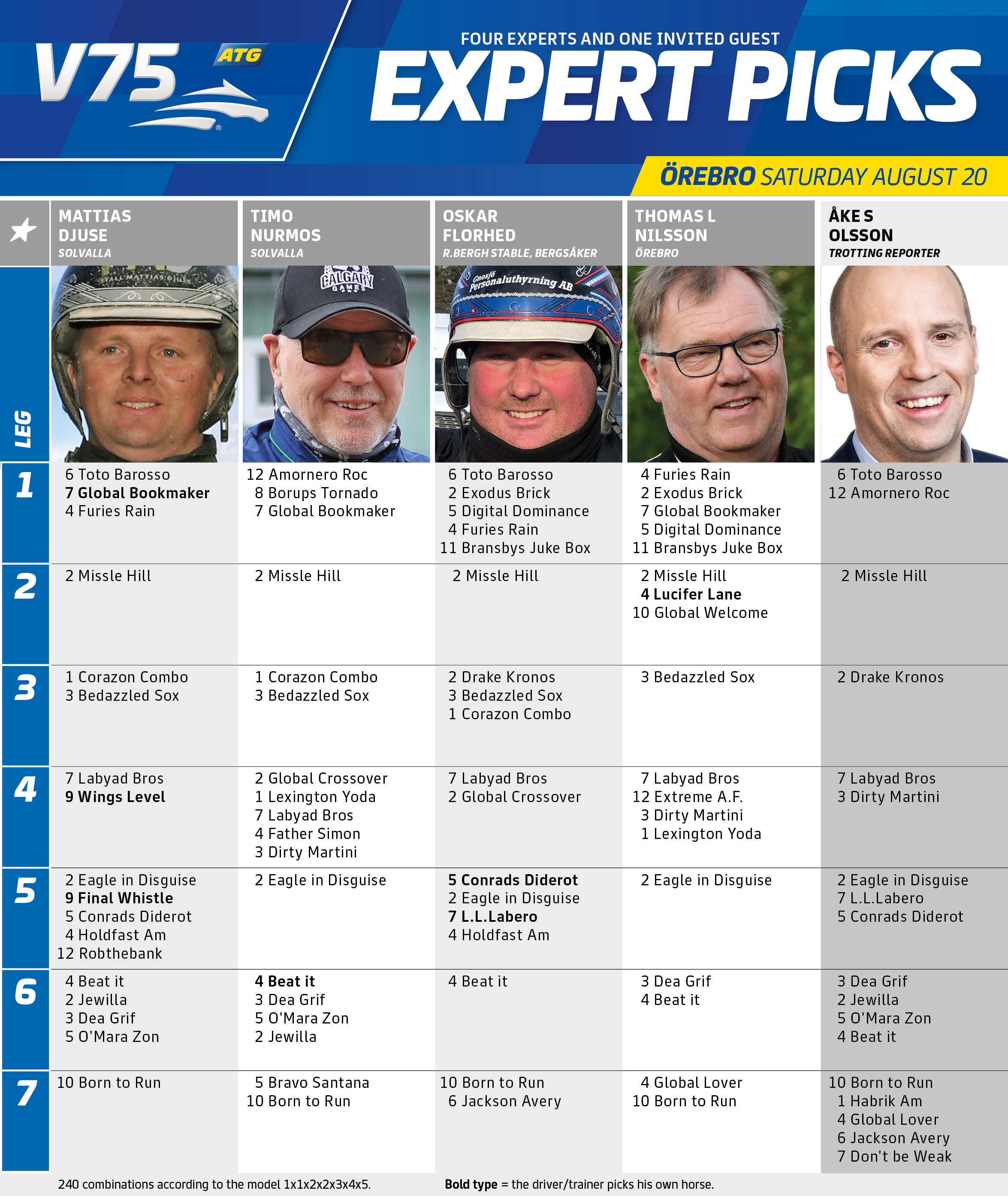 He is one of the most talked about horses in Sweden this year and especially after his last start, when he trotted the last kilometer at 1:07.7 speed to win impressively. San Moteur and Björn Goop have now arrived at the first big goal of the year - Jubileumspokalen and he is the huge favorite to win the first prize of SEK 1.5 million. "My horse has developed immensly this year and he feels fantastic. He wasn't tired last time out and normally he should be even sharper this time" says Håkan Arvidsson.
Read more
Expert tips

15 Stjärnblomster faces many handicaps in this race. With the right journey from the back she could use her speed during the final 700-800 meter and will not be easy to stop then. 6 Skeie Lotta comes from a sensational victory in the V75. Is up and down but really good when she is at her best. Early choice in that case. 13 Lome Perla parked outside of the leader in the last run and was brave. Could defeat many opponents here with the right trip. 7 Hulte Annika had galloped a lot but avoided a mistake in the last run. Early choice again without a mistake.

7 Nikita Vrijthout has scored a couple of wins under the saddle this summer and likes this discipline. Was brave from outside the leader in the last race against tough opponents. Our winner. 5 Önas Py will be interesting to see under the saddle. Is fast and will be ridden by gifted Emilia Leo. Early contender. 2 Commander Victory has one race under his belt now. Scored an impressive victory under the saddle last winter. 3 Cambria did not convince in the last race. Has good capacity and is an outsider.