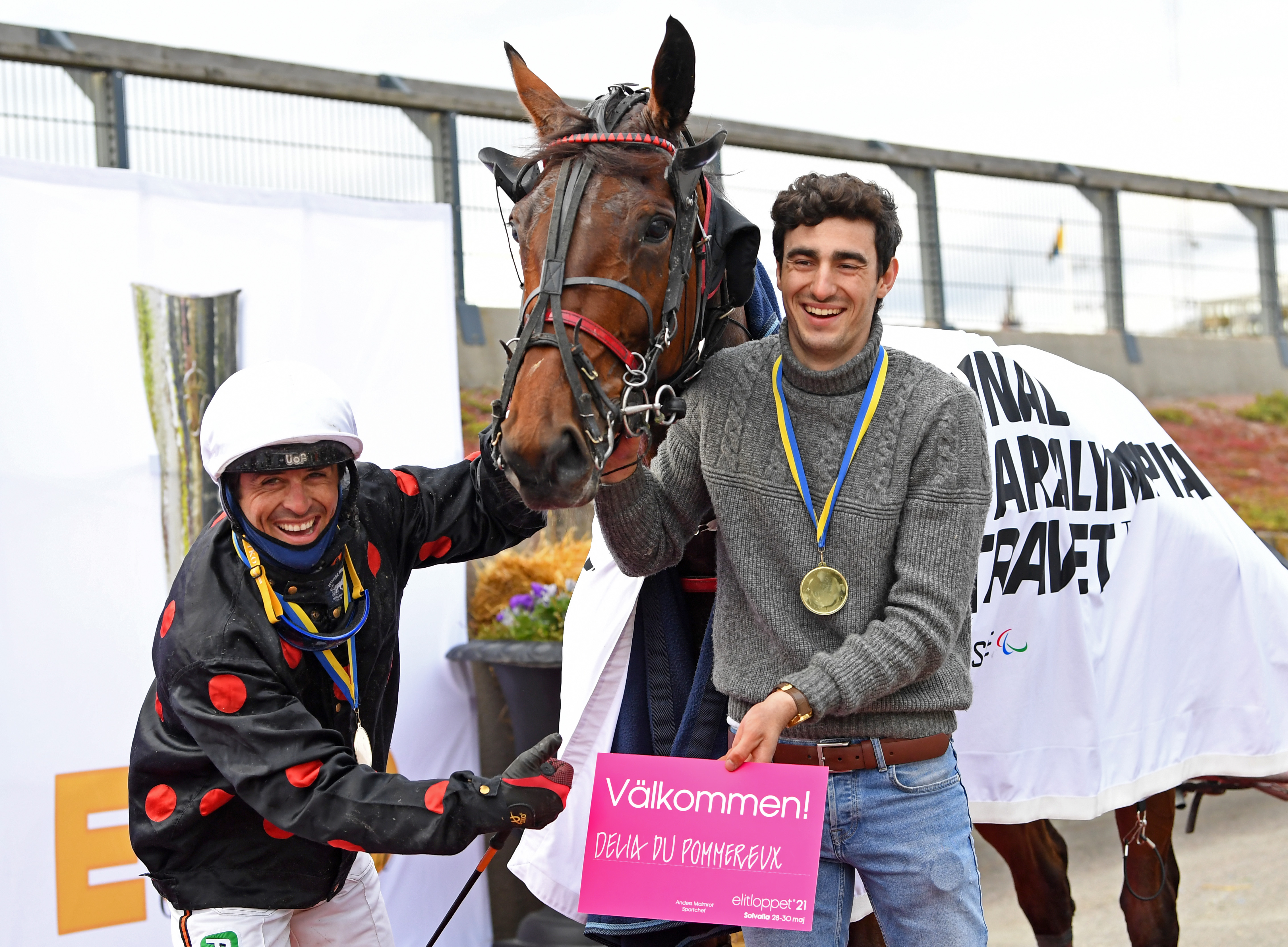 It turned out to be a furious pace in the Paralympic Trot with SEK 1.5 million to the winner.
Delia de Pommereux simply flew down the stretch to win and the connections said after the race that they are open to racing in Elitloppet.
"Magnificent! She is eight years old and it's hard to say no to Elitloppet" said the winning driver Eric Raffin.

When the gates folded at the start of the Paralympic Trot it was like firing off a canon. Several horses left hard and it turned into an eventful race to say the least. First to the front was the French invader Gelati Cut and there was also a wild battle when Örjan Kihlström behind Who's Who kept Björn Goop out three wide behind Ecurie D. around the entire first turn. The first 500 meters was trotted at 1:06.7 speed when Who's WHo finally reached the lead. That meant that Ecurie D. was parked on the outside for the rest of the race. The pace was still high as they passed the first kilometer at 1:10.5. Aetos Kronos got the position second over and one notch behind him was Delia de Pommeruex. Johan Untersteiner made his move three wide with 600 meters to go and Delia de Pommereux followed right behind him. Joining the move was also Very Kronos with Erik Adielsson who got Delia de Pommerux's cover.

"Felt in the last turn that we were going to win"
Aetos Kronos took over as they came into the stretch but had no answer when Eric Raffin fired off Delia de Pommereux. The French mare flew down the stretch and showed that she is the best trotting mare in the world. A few months ago she defeated none less than FaceTime Bourbon in Prix de France at Vincennes. She now won another Group 1 race worth SEK 1.5 million. The winning time was 1:10.9/2,140 meters with the help of the statrting gate and Very Kronos finsihed second after a very good rally. Aetos Kronos held on for third. Ecurie D. on the other hand tired completely the last 500 meters and finished far behind the rest of the field. Even if he got a very tough trip, he could not have been healthy.
"Magnificent! She's a superstar" said the winning driver Eric Raffin won the Olympic Trot ten years ago with another star trotter . Rapide Lebel.
"We got a great trip and it was just perfect when Aetos Kronos gave us cover three deep. I also could have gone first, she can handle those kind of trips too. When Delia is in form she just keeps coming all the way to the wire. I felt coming out of the last turn that we were going to win" Raffin also said.

Open to racing in Elitloppet
By winning the Paralympic Trot Delia de Pommereux was automatically invited to Elitloppet. Before the Paralympic Trot the connections had sad that they were not interested in racing her there, though. But after this victory they might be a bit more open to racing at Solvalla the last Sunday in May. That is according to the TV reporter Kristin Riise Ødegård who had been in touch with trainer Sylvain Roger. The driver Eric Raffin also seemed very interested in racing in Elitloppet.
"She is eight years old and it's hard to say no to Elitloppet. She was perfect today" said Eric Raffin.
V75 was won mostly by favorites and the payout was only SEK 2,077 for all seven winners picked. For six winners picked the payout was SEK 45 and for five there was no payout. That means there will be a jackpot on V75 next Saturday at Umåker. According to ATG's calculations there will be SEK 52 million to pay out for all seven winners picked.