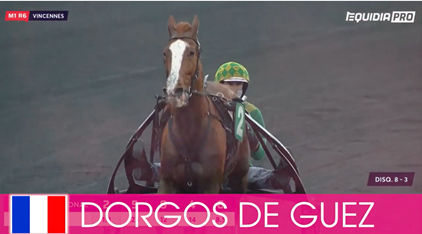 Two years ago he had to settle for a second place.
This year he sends another winning machine.
Jean-Michel Bazire’s Dorgos de Guez is coming to Elitloppet.

Jean-Michel Bazire has won Elitloppet twice as driver, with L’Amiral Mauzun in 2007 and with Exploit Caf the year after. But as trainer he hasn’t been victorious. It was close with Aubrion du Gers in 2019, but his fellow countryman Dijon was too tough. This year the best trainer in France sets aim again and sends Dorgos de Guez.
"He´s a fantastic chestnut with lots of ability who will be exciting to see in this year's Elitlopp" says Solvalla's racing manager Anders Malmrot.
The eight year old gelding won Prix Jean Riaud at Vincennes on April 17 and he has won 31 out of his 66 career starts. His biggest win came in Prix du Luxembourg and his total earnings are over € 968,000.