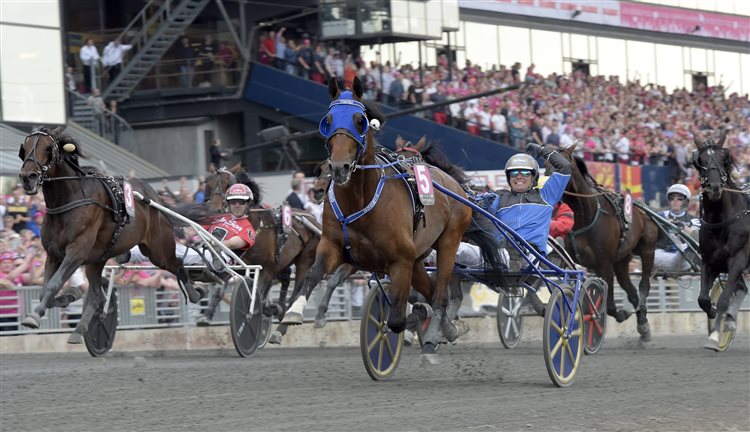 In 2014 he won Elitloppet as the favorite.
On Sunday French Timoko did it again – and defeated the big favorite Bold Eagle who everyone thought was unbeatable.
“Timoko is a true warrior. To bounce back as a ten year old is not normal!”, said a very happy Björn Goop in the winner’s circle in front of a bit more than 30 000 people at Solvalla.

This year’s Elitloppet ended in a very surprising way.
After the elimination races many people expressed that the big favorite Bold Eagle could be the best trotter of all times – after his extraordinary victory from the position outside of the leader clocking the fastest time in Europe ever, 1.08,4.

But Bold Eagle didn’t have the same power in the final and he couldn’t challenge Timoko after a trip second on the outside. Nuncio didn’t have the strength to race in the position outside of the leader the whole race.

It was instead Björn Goop who won the race again together with Timoko. The big star was already the French trotter with the most total earnings ever, SEK 44 million, and he now earned SEK 3 million more.
Goop charged very hard from start, reached the lead before the first turn and stayed there for the rest of the race. The punters who believed in Timoko were given the winning odds 30,89.

After the first 500 meters that clocked 1.08,0 Goop and Timoko could slow the pace down a bit. Going through the final turn Björn Goop charged as much as possible and Timoko left the others behind over the home stretch.
“I’m just as shocked as everyone else. It wasn’t until the last 100 meters that I understood that we would win. I was thinking of Bold Eagle the whole time. When will he come? When will he come? But he couldn’t catch us.”, said Goop.

Björn Goop was noticeably affected by the win. The Swedish driver has been driving the French star in recent years.
“Timoko is an exceptional individual. He always bounces back. The horse has been beaten by Bold Eagle so many times and now he gets to win Elitloppet and beat him. This is the last season he can race in France so everyone feels that the end in near.”

"The nicest race in the world"

The fighter Timoko competed in his fifth straight Elitloppet final. Something that only Johnny Takter’s Nealy Lobell has done before.
Richard Westerink – the owner and trainer of the horse – ran across the track after the finish and danced with fellow Frenchmen in the rain that had just started to drip after an otherwise sunny day at Solvalla.
“It’s the nicest race in the world and I can’t understand that he managed to win here today. I even said that no one can beat Bold Eagle.. and then it’s my horse who does it. He’s a star. It’s my Timoko.. it’s your Timoko.”, said Westerink and looked at the crowd.

The runner-up in Elitloppet was Daniel Redén’s Propulsion who sprinted very well together with driver Johan Untersteiner. Åke Svanstedt finished third with last year’s runner-up Resolve after a trip in the leader’s pocket.

The big favorite Bold Eagle finished just fourth in Elitloppet after a good trip in the final. Nuncio was fifth.
Bold Eagle’s driver was low-spirited after the race.
“It was too tough for the horse to race twice.”, said Franck Nivard.
Stefan Melander was not as discontent with Nuncio’s performance.
“It was a tough race for him. We will come back.”