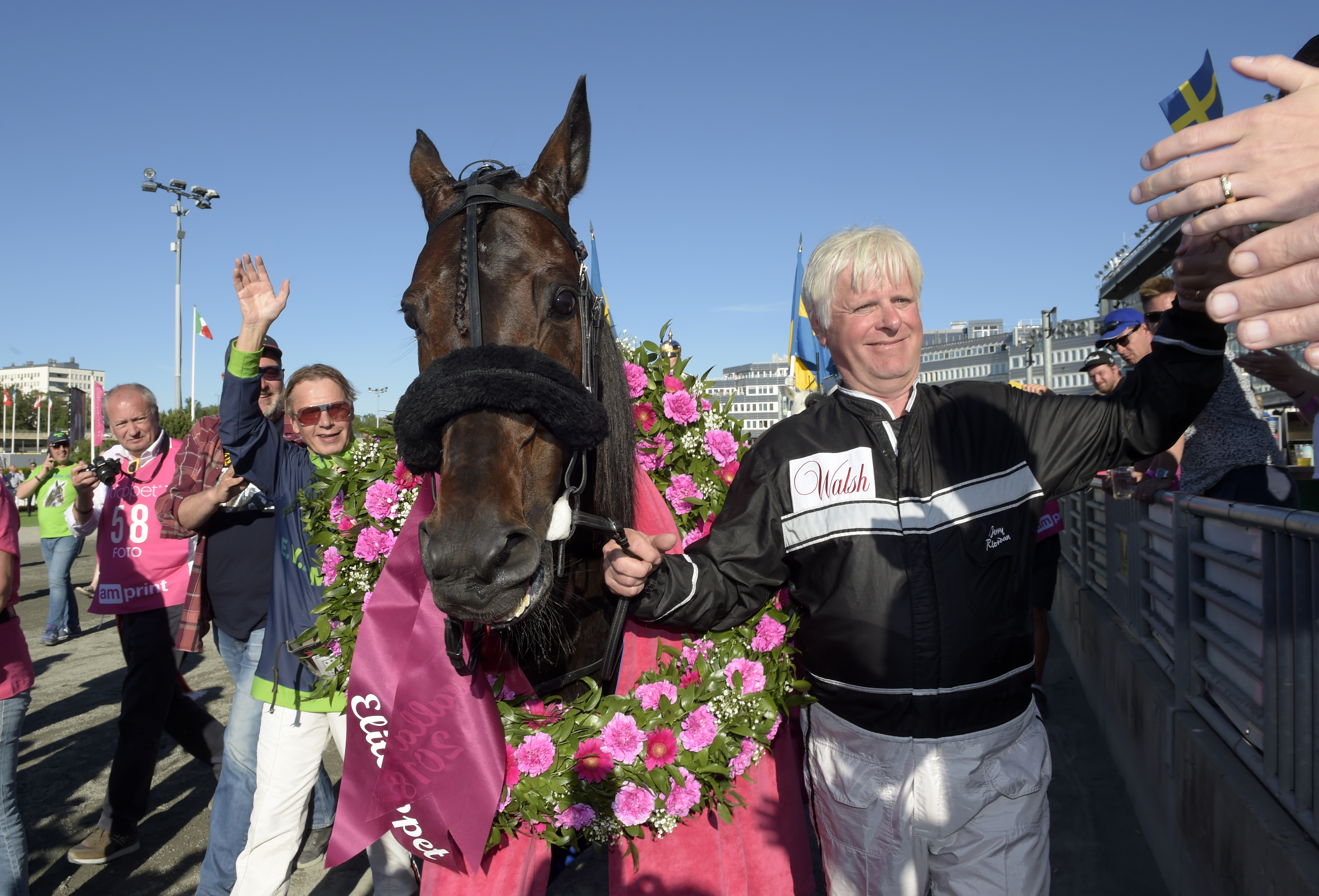 Elitloppet to the little guy

Halmstad based American Jerry Riordan took home the classic Elitloppet at Solvalla.
The horse who did it was eight year old Ringostarr Treb who came to Riordan stable last summer.
"I've always dreamt about winning Elitloppet - and I did it with the little guy".

The little fighter Ringostarr Treb got his invitation to Elitloppet after he won Olympiatravet earlier this spring. He's an eight year old stallion with almost SEK ten millions in earnings who has been competing in the European elite for several years.
Ringostarr Treb won the Sweden Cup in 2015. He now became the second horse in history to go from winning Sweden Cup to also win Elitloppet.
"Everyone knows the story that the horse in to my training at age seven. He's little but he'll take on anyone. I knew he could win if horses like Bold Eagle and Propulsion made some mistakes and here we are now. I'm so happy and so proud of my entire team" said Riordan after his life's biggest victory.
Since Ringostarr Treb is owned it Italy so it was the tri-colored flag that ended up as the winner of Solvalla's Elitlopp with SEK three millions for the winner.

Paal's biggest win
58 year old German native Wilhelm Paal has been the regular driver of the winner for many years. Paal was vey happy after the win which he claimed was the biggest of his career.
"He has shown for many years that he's a top horse and now he stepped up to the elite. I have worked in Sweden for three years now and I'm very happy to win here at Solvalla. The biggest win of my career so far" said the winning driver.

Silver to Propulsion
Ringostarr Treb couldn't hold up the lead from his inside starting position in the final of Elitloppet where Johan Untersteiner blew straight to the front with Pastore Bob after pushing him out of the gate.
After sitting in the pocket behind Pastore Bob, Wim Paal pulled Ringostarr Treb halfway down the backside. Already in the last turn Ringostarr Treb had beaten the leader and held on to win in 1:09.0 over the mile, which equalled the stakes record for Elitloppet (same time as Timoko in 2017).
Örjan Kihlström got away in the rear of the field with the betting favorite Propulsion. Daniel Redén's star closed well from sitting fourth over after a wide last turn and kept coming closer and closer and at the finish line he was only beat a length.
Örjan Kihlström was happy with his horse but said it was another tough loss.
"We got away too far back. But what made the difference was that Ringostarr Treb was able to stay at the pylons for so long. Propulsion is fantastic and always puts up great efforts as second and third. That's why I really wanted to him to get a win this time" said Örjan Kihlström.
Finishing third in Elitloppet, the biggest sprint race in the world, was Solvalla trainer Reijo Liljendahl's Nadal Broline with driver Ulf Ohlsson. Fourth was Dreammoko and fifth was Daniel Redén's Lionel.
The favorite to win Elitloppet, the French Bold Eagle made a break in the chaotic elimination with four recalls which made the Eagle way too fired up and he has most likely made his last appearance in Elitloppet.