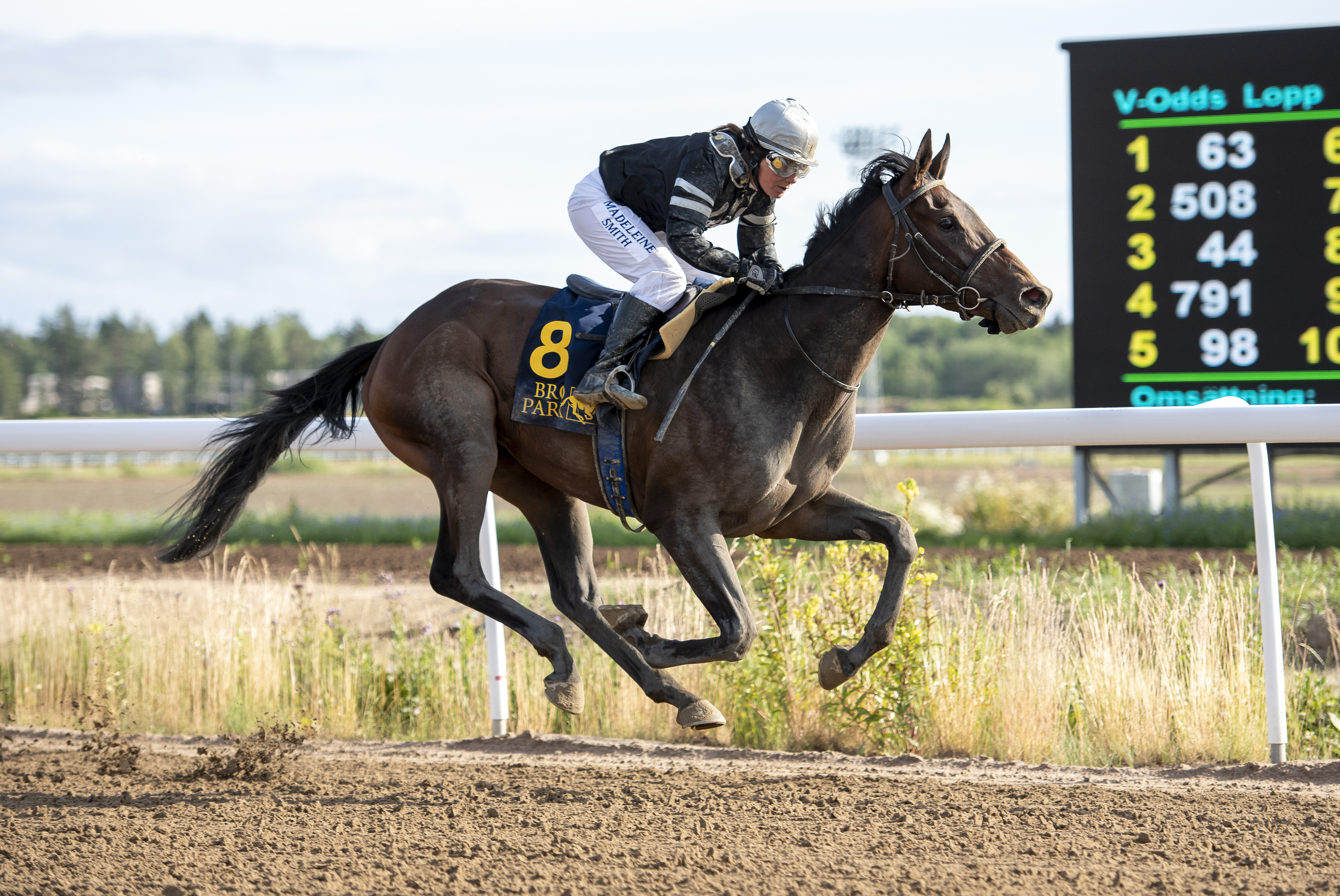 Espen Hill and Madeleine challenging the elite in Stockholm Cup

He is the youngest, he starts with the lowest handicap - but with the highest win percent!
Four year old winning machine Espen Hill is an exciting challenger in Stockholm Cup.
"Nothing ventured, nothing gained" says trainer and jockey Madeleine Smith.

Espen Hill is the youngest horse in the Stockholm Cup by three months toward the other four year old in the field, Privilegiado. Espen Hill is a horse who in the official program is described as: 'a horse who always comes like he was shot out of a cannon when nearing the finish line'. A wonderful feature which so far has resulted in seven wins, two second places and one fourth place in ten career starts. His win percent of 70 is the highest of all in this year's Stockholm Cup field.
"To race in Stockholm Cup will be a big step up for him, but we think it will be fun to give it a try. Nothing ventured, nothing gained. The other horses have a different toughness".

Only female jockey in Stockholm Cup
Madeleine Smith is the only trainer to also ride in Stockholm Cup and she is also the only female jockey in the Group 3 race.
"This is my life and I want to both train and race. I've ridden in Stockholm Cup once before - in 2001 - when I finished outside the money with a horse named Dream Power".
Madeleine Smith has been described as the power lady of thoroughbred racing. Despite her many years in the sport she loves, she has no thoughts of slowing down neither as trainer nor as jockey.
"I say like Zlatan (Ibrahimovic), age is just a number".
What are your expectations in Stockholm Cup on Sunday?
"I need to do my research and study the race well and be successful with my ride, but the Norwegian horses will be very tough. The toughest one will be last year's winner Square de Luynes, with only one start this year I'm sure he will be improved off of that. But if they have a bad day and I have a good day...My horse is in good shape and he can race from any position. He always finishes strong and that's what you want. Of course I'll be surprised if he can go all the way to the top".
How would you describe Espen Hill?
"He's a horse who is a bit annoying and has a lot of energy. Because of that we will ship in late to Bro Park and bring his friend, Will Be A Hero who is an ex race horse. He and Fanny Lindström are both very important to my horse".

Undefeated two year old
Madeline Smith has three more starters on Bro Park's big day and she rides two of them herself.
Noosa Prince (GS75-3) won his last start, also at Bro Park, but has been scratched after that.
"He is in against a horse with a form rating of 88 and I have to give up four kilos to him, that horse also has an apprentice weight relief...but I haven't given up"says Madeleine Smith.
Two year old Redirect (GS75-4) in Svealandslöpning in undefeated after one start.
"He's a horse we bought at an auction and castrated right away. He made a very good debut in Gothenburg. This might be tough, but if you want to have a chance at the big money it will be tough. I've seen that we're ranked last but I don't know...every race needs to be ridden" says Madeleine Smith.
Luisette Hill (GS75-7) is chasing SEK 400,000 in Lanwades Stud Stakes (L) together with Kevin Parkin.
"She lost the race already in the start last time as she jumped right up in the air and lost five, six lenghts. Now it's a race with 15 fillies and mares and I think it will be tough for her to finish top three" says Madeleine Smith.