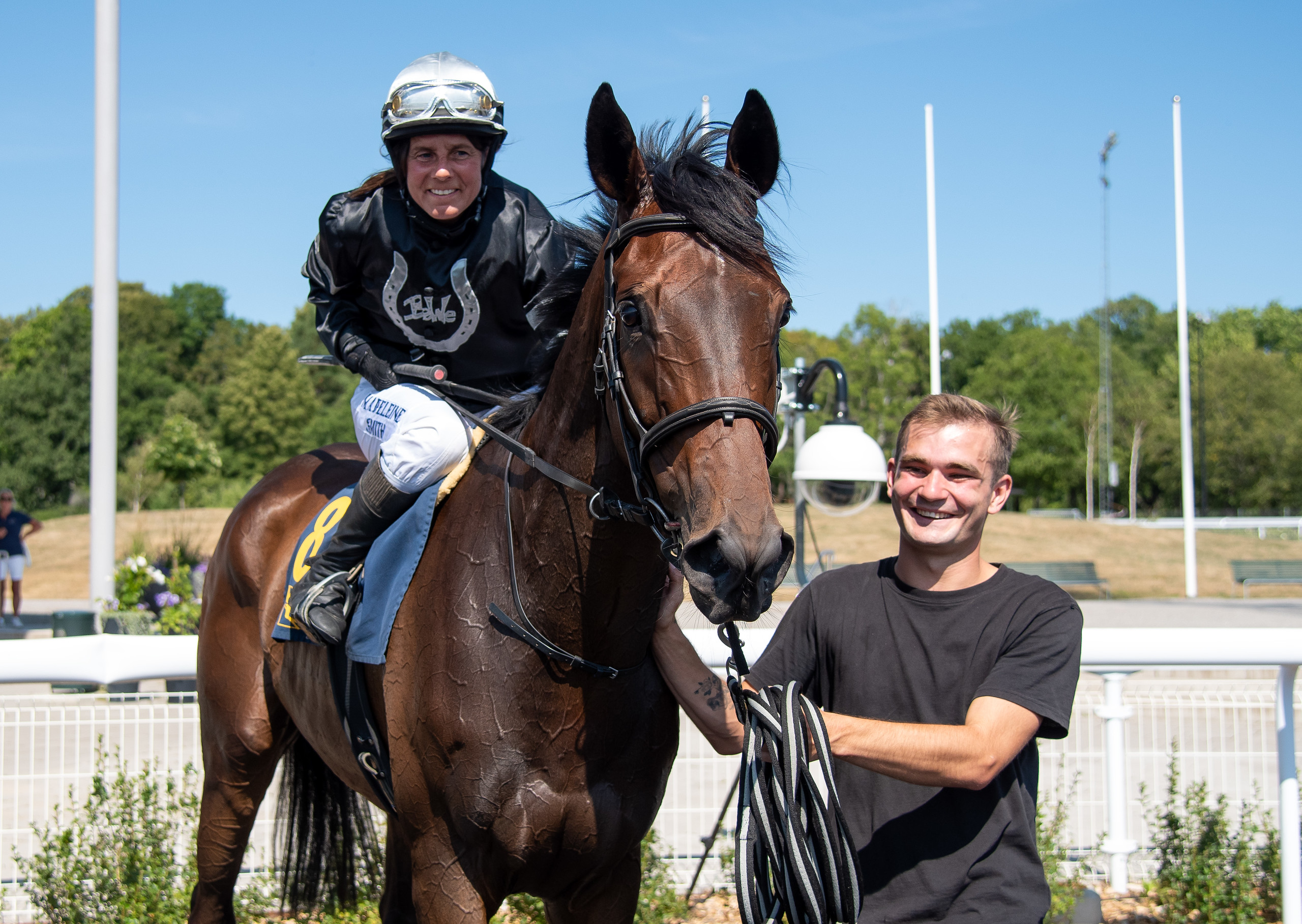 Grand Slam 75®: Hometown hopeful in Stockholm Cup - "My dream is to win"

On Sunday, Sweden's richest thoroughbred race Stockholm Cup will be ridden at Bro Park.
Hometown hopeful Espen Hill is one of the favorites in the hunt for the SEK 900,000 first prize.
He has raced in the Cup twice before - he finished fourth last year and second, two years ago.
"He was good last year but he is much better this year. I think he will end up battling for the win and my dream is of course to win it" says trainer and jockey Madeleine Smith.

The Group 3 race Stockholm Cup is also the biggest race in Scandinavia for thoroughbreds. This Sunday, Bro Park hosts Grand Slam 75 including Stockholm Cup and several other nice races. The Cup this year is a wide open 15 horse field, Stockholm Cup has not had a field this big since 1993. One of the favorites is the Irish born 11 Hard One To Please (GS75-4), a Norwegian trained top three-year-old who has won both the Swedish and the Norwegian Derby this year. Last time out at Øvrevoll, he crushed his oppponents and won by 12 lengths. He now faces a tough challenge, as he takes on older and international opponents.
One of the big hometown hopefuls is the fan favorite 2 Espen Hill (GS75-4). The six-year-old gelding is trained and ridden by Madeleine Smith and has raced in Stockholm Cup twice before. Last year he finished fourth and two years ago he was second. This year, he is undefeated in two starts and Madeleine Smith's horse is one of many win candidates on Sunday.
"2 Espen Hill (GS75-4) has raced twice this year to get going and I have been very happy with him. Last year, I had lots of problems with viruses in my stable, that's why I didn't have a good year. We can just scratch out last year's numbers, but this year has been much better. Just look at the results. Espen Hill was a good fourth in Stockholm Cup last year, but he is in much better shape this year" says Madeleine Smith.

"A handful before a race - has to ship alone"
"But it's a tough race to win and this year it's a 15 horse field. The trip and form will be the deciding factors and you also need some luck. I don't want to say that my horse is without a chance to win, absolutely not. If he is healthy, then I think he will end up battling for the win and my dream is of course to win. But you won't get anything handed to you on a silver platter in a race this big".
"Espen Hill is a handful before a race, once we get to Bro Park. He is tough to handle before and also while shipping so he has to ship alone to the track and arrive as late as possible. But once the gate opens he is fine. He is not a front runner, he has mostly been ridden to come from behind since he has a very good finishing speed. Like I said before, he is a completely different horse this year" says Madeleine.

"He deserves to win now"
Madeleine Smith, who is licensed at Bro Park, has 9 wins in 46 starts so far this year and that is a completely different record compared to last year. Besides Espen Hill in Stockholm Cup, she has three more starters on Grand Slam 75. In the second leg, she has two horses in the same race.
"5 Brazen Soul (GS75-2) and 8 Diamond Soul (GS75-4) are two very nice horses who both have had problems with their blood counts. If they are healthy, neither of them is chanceless, but it's hard to say who the best one is. I don't know if they are good enough to beat Wido Neuroth's horse Starlight Song, but I wouldn't call them chanceless".
"5 Redirect (GS75-5) raced in Norway a week ago and finished second in St Leger behind Captain Chorus. He was good then, but the question is how much that race is still in his legs for this start. He used to race best in Gothenburg, even if he has been decent at Bro Park, too. I think he deserves to win a race now and he is not chanceless" says Madeleine Smith.