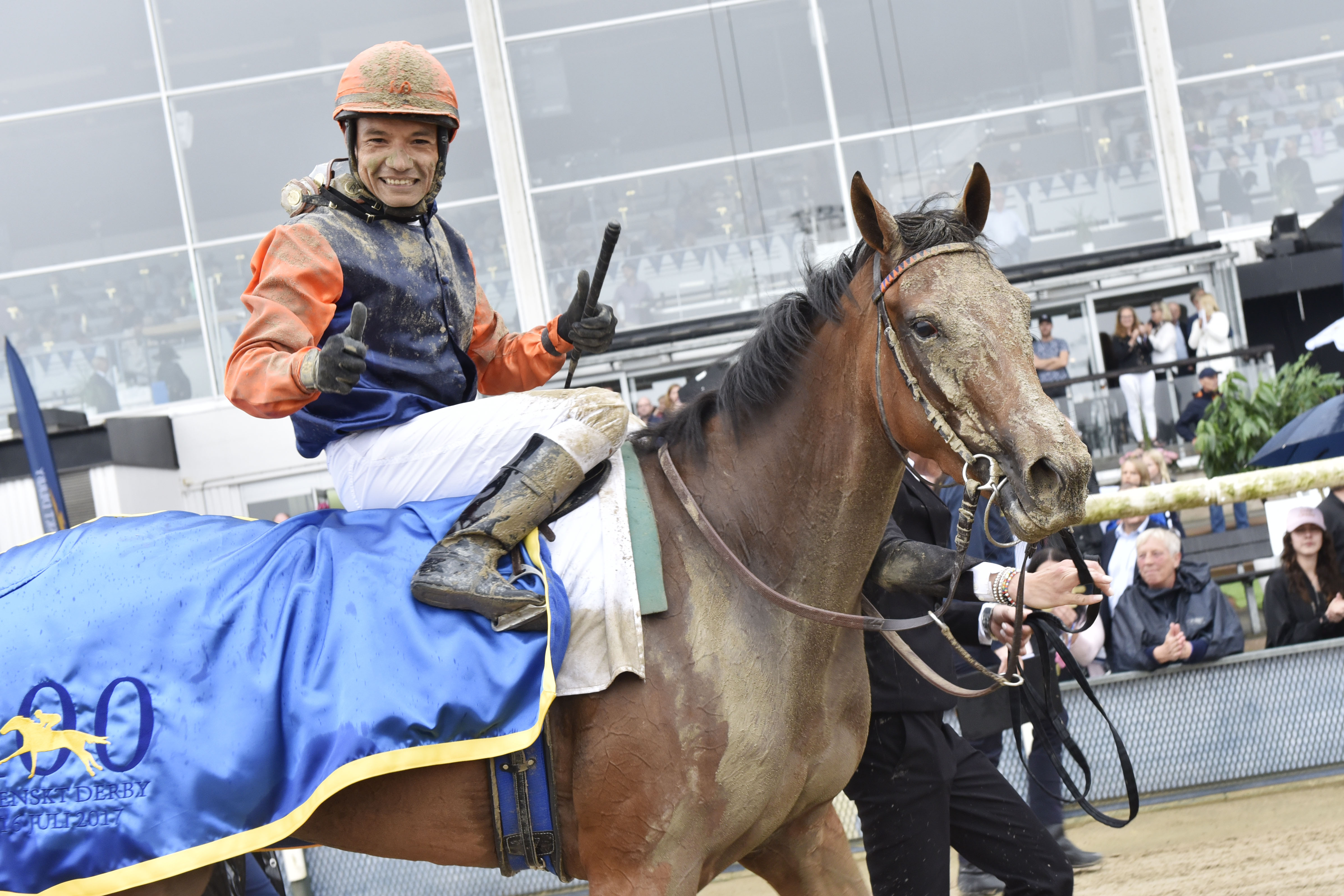 Huge upset by Dorcia in the 100th Swedish Derby

The little mare Dorcia pulled off a huge upset when she beat the boys to sensationally win the 100th Swedish Derby at Jägersro.
In a thrilling finish she rallied to beat the favorites Gold Tyranny and Stricker to win the SEK 1.5 million Derby.
In the saddle was Carlos Lopez and the winning trainer is Lennart Reuterskiöld Jr and together they won their second consecutive Derby.
- I'm ecstatic. Now I'm in the history books for real, said "Junior".

A mare hadn't won the Swedish Derby since Final Care did it in 2001.
But on Sunday afternoon at Jägersro it was time to change that. The longest shot on the board, Dorcia did what many thought wasn't possible. In the hands of Carloz Lopez she got a perfect trip and played stalker the entire way over the 2400 meter long race. The jockey waited until the top of the home stretch to use her speed and with an incredible rally, she flew past the two favorites Gold Tyranny and Stricker just before the finish line.
- It was amazing, screamed Carloz Lopez who won the Derby for the second consecutive year. Last year he rode Duke of Burden - also trained by Lennart Reuterskiöld Jr - to victory.

Third Swedish Derby for "Junior"
And trainer Reuterskiöld Jr is no worse. This was hid third Swedish Derby victory.
- It's hard to put the feelings into words, but I'm damn happy. It's the 100th Derby and now I'm in the history books for real. It's my third Derby win and my second in a row. This is huge and I'm ecstatic, says Reuterskiöld who gave Lopez a lot of credit for the ride.
- Carlos is an expert when it comes to giving them a perfect stalking trip. No one can do it better than him. I can't even describe how happy I am with my horse. It's incredible and we have a fantastic team behind us, you can't forget that.
Lennart Reuterskiöld Jr had four horses in the Derby, The race favorite Gold Tyranny who finished third was one of them. Second finished the third favorite, Stricker.

Land's End won the Zawawi Cup
In Jägersro's biggest sprint race, Zawawi Cup there was also an upset when Land's End rallied to a clear victory and took the fourth victory in a row.
First prize was SEK 800,000 and Land's End is trained by Fransisco Castro and was ridden to victory by Alexandre Dos Santos.
Grand Slam 75® was full of upsets and it was so hard, that nobody had all seven winners. Already after the sixth leg, all tickets were out after Dorcia's upset win. 6 out of 7 paid SEK 69,721 and  5 out of 7 paid SEK 2,363. This means there will be a jackpot next time GS75® is held at Åmål in two weeks, Sunday July 30th, Next weekend there are two V75® cards at Axevalla's StoChampionat weekend.