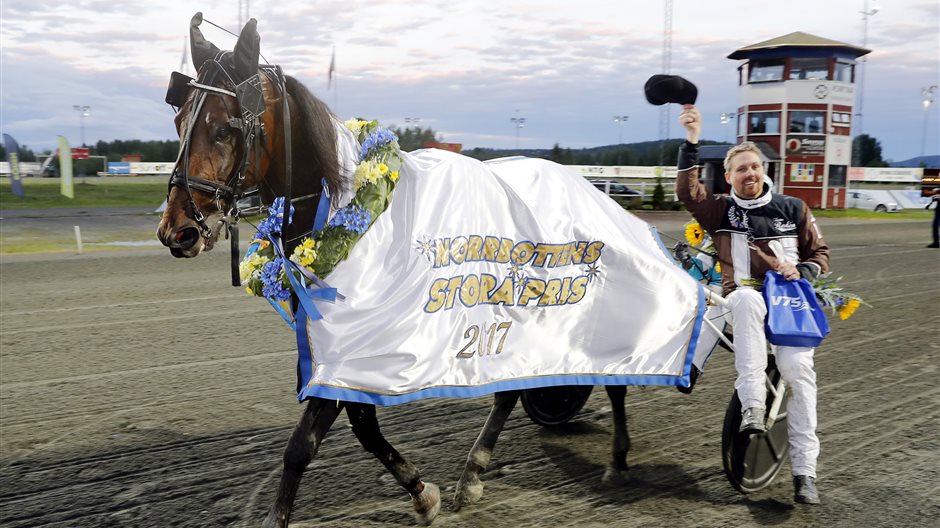 Daniel Redén reigns the trotting in Sweden.
Propulsion defended his title in Norrbottens Stora Pris and his stablemate In Vain Sund finished third.
Whitehouse Express won the Silver division.
“Wow, such good horses..!”, said the Solvalla trainer and gave Propulsion a big hug after the win that was worth SEK 1 million.

In the midnight sun in Boden Propulsion defended his title in Norrbottens Stora Pris. The six year old colt, who was runner-up in Elitloppet three weeks ago, was very impressive and won despite a trip outside of the leader Mosaique Face the whole race.

Coming on to the home stretch the leader was beaten and Propulsion took over. Even if Oasis Bi found some late racing room he couldn’t challenge and Propulsion won with a small but safe margin together with Örjan Kihlström.

The winning time clocked 1.10,8/2140 meters, auto start. A new record for both Boden Racetrack and the race Norrbottens Stora Pris.

“It’s a good performance from Propulsion to win, without any help, from the position outside of the leader. He felt very nice through the final turn, but he got comfortable when he came first and I had to use the Norwegian bridle. It’s a really nice horse who has everything besides that great gate-speed.”, said Örjan Kihlström.