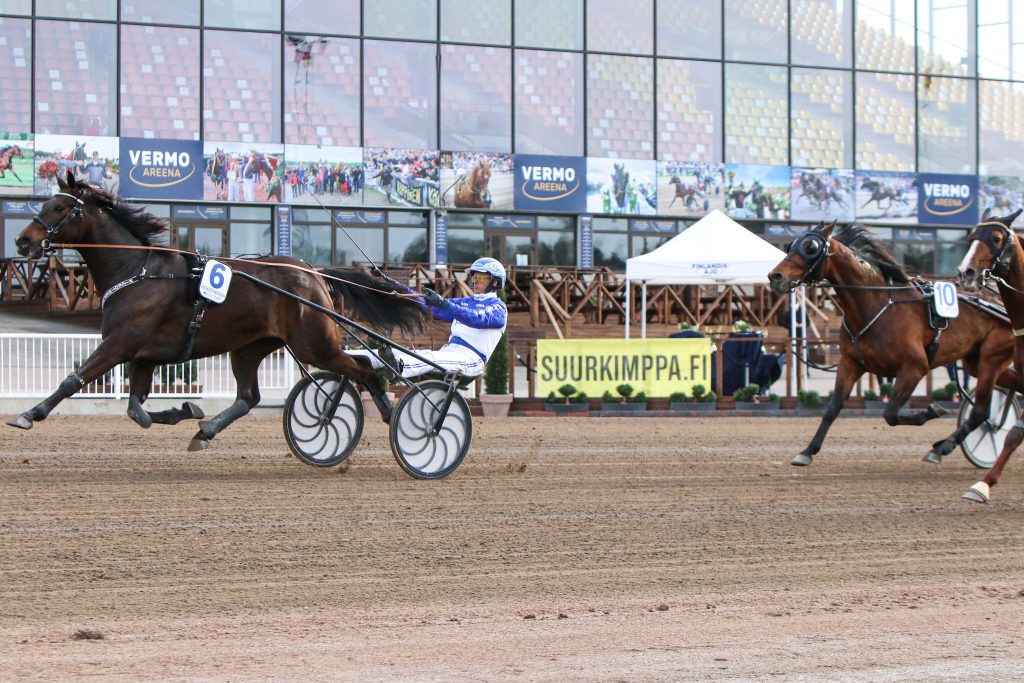 €110,000 and a ticket to Elitloppet.
The 22-1 shot Hickothepooh flew down the stretch and became the upset winner of Finlandia-Ajo.
"It's fantastic, a dream for everyone, both drivers and trainers, to get to race in Elitloppet" said the winning driver Vidar Hop.

Finlandia-Ajo at Vermo racetrack in Helsinki, Finland became a speed fest as expected and the one who set the pace was Milliondollarrhyme and Fredrik B Larsson who left very quickly to take the lead before Finnish catapult starter Le Gros Bill.
But the agressive start made Milliondollarrhyme - fourth in last year's Elitlopp - hot and he set a high pace, 1:08 speed the first 500 meters turned into 1:08.5 the first kilometer. Parked outside was Vernissage Grif, also anxious to go.
As the two trotters came to the top of the stretch, their strides got shorter and shorter and the horses were closing in from behind, fastest of them all was the big upset Hickothepooh.
The Norwegian nine year old gelding was still sitting last in the two path with 400 meters to go, but down the stretch he came flying with Vidar Hop and he won by a considerable margin at the finish line.
The winning time - 1:09.9 - is only a tenth of a second off the track record at Vermo.
Next Direction from the home team finished second and Vernissage Grif hung on for third. Milliondollarrhyme finished fourth.
"I was hoping for a high pace the entire race, then I know he has a strong finishing rally. The pace was very good the first kilometer, I thought I had too much ground to make up on the two upfront but a third place looked to be within reach at the top of the stretch. But they got tired and mine trotted fast down the stretch and he won easily. It was the first time he raced without shoes and overcheck combined, we had saved his feet for this race" said the winning driver Vidar Hop.
Beside the first prize of €110,000 there was also an Elitlopp ticket in the pot.
Hickothepooh is trained by Trond Andersen. 'Bullern' as he is called, was fourth in Elitloppet with Yarrah Boko in 2012, after having won his elimination heat with Ulf Ohlsson in the sulky.
The Sunday victory was a light in the dark for the popular Norwegian trainer, who in March revealed that he was diagnosed with skin cancer that had spread to several of his internal organs.