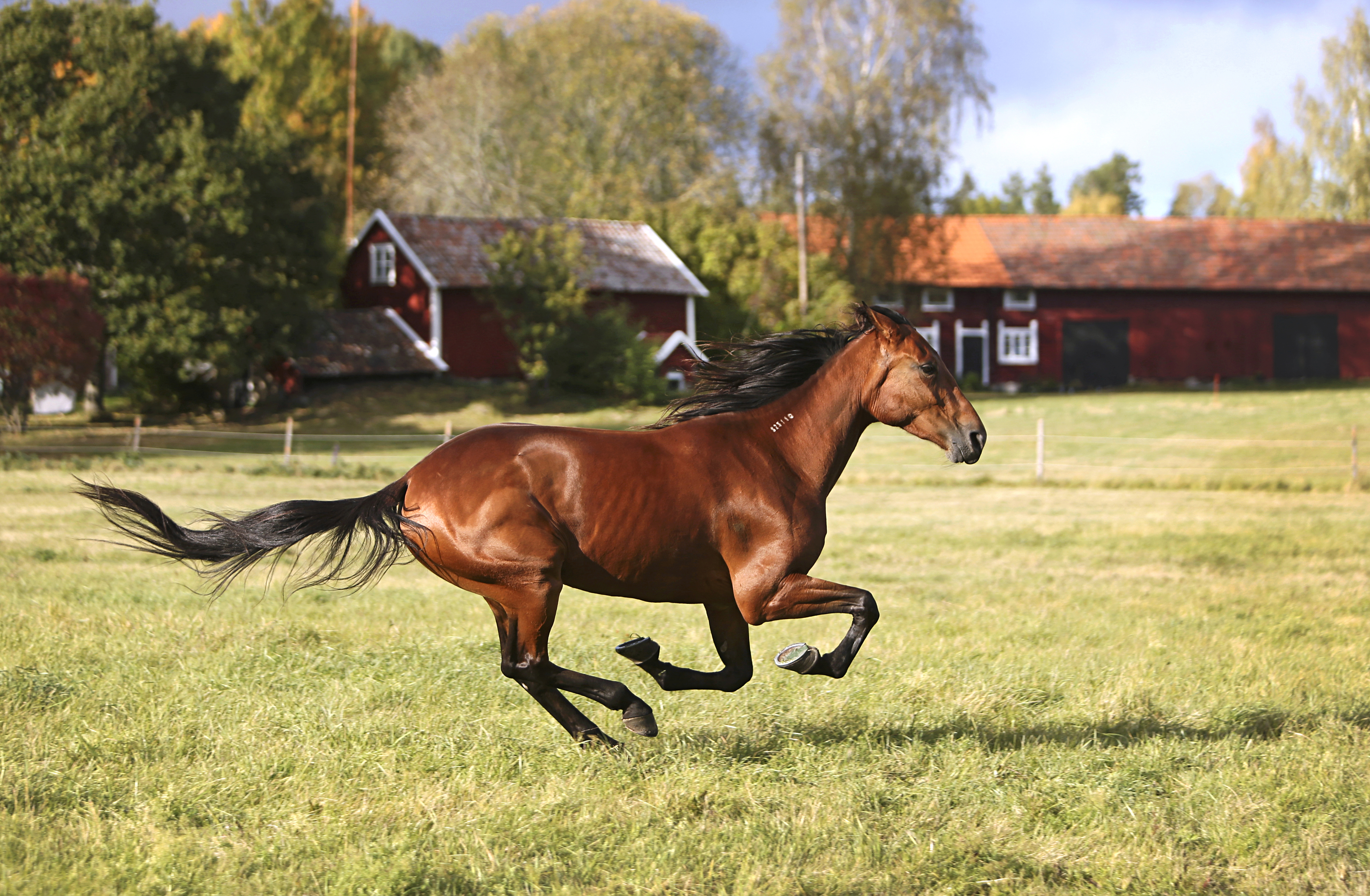 ​Almost counted out by the experts.
But then she stroke at the Swedish Championship day at Åby.
Galactica - crowned Mare of the year in Sweden 2016 - is eight years old on her way into top form again.
"She has really shown all the critics who haven't believed in her!" says amateur trainer Malin Bergström whose star goes out at her home track on V75 on Saturday.

In the picture from 2016 Galactica has just won Stochampionatet and is bouncing around at home in her paddock at the farm in Himmelsända in Eskilstuna.
Malin Bergström assures that Galactica is just as frisky today. As an eight year old.
A couple of tries to get Galactica pregnant have failed. So have all the plans of a slower pace over the years. Galactica simply likes it best when she gets to train and race.
"She has always been special and a bit eccentric and we are incredibly proud that she's almost in the form of her life as an eight year old. My biggest joy is that she is back and that she thinks this is so much fun still. If she has a chance on Saturday? Yes, in the form she is in now I can't see how she won't be one of the horses who can win it" says Malin Bergström.
She is cleaning stalls as we are doing this interview on Monday. Malin Bergström and her family are neighbors with Malin's parents who own the farm, situated between Eskilstuna and Strängnäs.
"It's me, my mom and my dad who work with the horses daily. We have ten horses at home now, including my daughters' ponies. I train six horses myself. Lately I've gotten a few partners on a couple of the horses, which is a lot of fun. We have managed to get some of the parents of the girls in my daughter's football team involved in harness racing" says Malin Bergström.

Dreaming of Prix de Cornulier
On Saturday the star of the stable Galactica will race in the mares elite (V75-3) at home in Eskilstuna. Galactica has raced a lot under saddle lately. The mares elite is a sulky race which means the regular driver Lars-Åke Söderholm gets the chance to drive her again.
Söderholm will also drive if they make the trip to France this winter, where the plan is to alternate monté and sulky races.
Unless the increased infectivity of Covid-19 gets in their way the family is dreaming of a start in the world's biggest monté race, Prix de Cornulier in Paris in January.
"There's a risk that Vincennes will shut down for foreign horses. We can just keep dreaming and keep her in form. But we are aiming at Prix de Cornulier".

Incredible in the Swedish Championships
This year she has made 10 out of her 14 starts in monté. That's a new discipline for the eight year old mare.
In her last start she won the Swedish Championships in monté at Åby where she was involved in a tough duel with Rajesh Face and managed to edge him out at the end after a great ride by jockey Anna Erixon.
It was a very good effort by Galactica.
"What an incredible race she does! Of course she loves monté. But she was also very good when she finished third for Lasse at Solvalla where she trotted 1:09.9 in the start before that and I believe she still thinks sulky races are a lot of fun too" says Malin Bergström.
In June 2019 Malin said that the racing career was over for Galactica. After having problems finding the right form for a period of time she also came up with a cough before a start and had to be scratched.
"We felt that we couldn't get her in shape. Her left stifle was bothering her and when she started coughing we said let's just make her a brood mare instead" says the trainer.
Galactica was bred but did not catch so she had to resume her racing career again.
On Saturday she comes out in the mares elite against mares like Björn Goop's Mellby Free and Timo Nurmos' Hevin Boko who recently won the Swedish Championships for mares.
Post position nine in the second tier makes the trainer lay a bit low. The distance 2,640 is an advantage though.
"The distance is absolutely not a problem. But the post position? So many things have to go right from there. On the other hand she has shown that she races well from behind. When she races under saddle that's never the case since she leaves the gate so fast. Lasse (Söderholm, driver) must have some luck with the trip from that post position".
What type of race do you think it will be on Saturday?
"I kind of hope and think that Mellby Free will get to the lead and that Hevin Boko will come up early and put pressure on her. Maybe Nurmos' mare might even get to the lead after her efforts in her last starts. Hopefully they will keep the pace up".
In the mares elite at Solvalla in September she raced barefoot all around for the second time in her career. How will she go this time?
"I think she will go with shoes upfront and barefoot behind. We are saving her front feet for the sprint races. But I haven't discussed it with the driver yet. If the weather is right we might go all in and pull all four shoes. With a good trip and unless the pace is very low she should definitely have a chance to win. I think she has shown that she can go with the best mares".

Writer's note: Sundbyholm racetrack in Eskilstuna is the host of V75 also on Sunday. Included are the Breeders Crown finals.