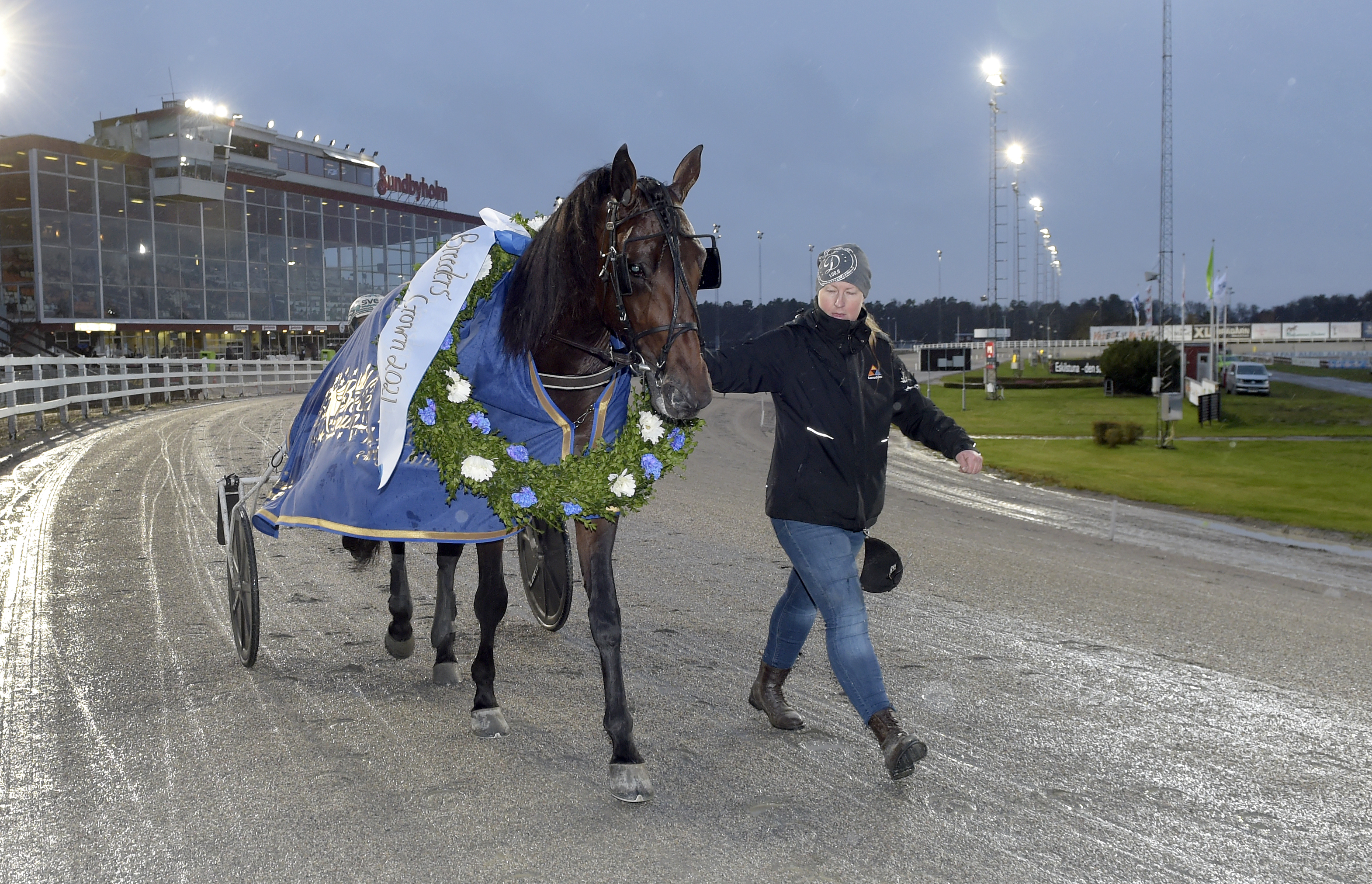 He did it with Conrads Rödluva.
Daniel Redén can make history on Sunday if he does it again with Glamorous Rain and Francesco Zet.
Defends the Breeders Crown championship, that is.

The legendary Ina Scot was the first one to do it in the early 1990s.
Since then, only four trotters have been able to win back-to-back Breeders Crowns as both three- and four-year-olds.
This year, two horses have the chance to do so, both are trained by Daniel Redén.
This weekend a year ago, 1 Glamorous Rain (V75-1) and 4 Francesco Zet (V75-4) were both celebrated in the winner's circle after having won SEK 1.6 million each in the last big race of the season.
Last week both of them took care of business in the semifinals and gave themselves the chance to join the exclusive club that except for Ina Scot also includes Lovely Godiva, Yield Boko, Sahara Dynamite and Conrads Rödluva.
The latter was trained by Daniel Redén who now has a chance to become the first trainer to have three horses winning back-to-back Breeders Crowns.

Richest four-year-old of all time
For Francesco Zet it would be the icing on the cake in an undefeated season and he is already now the country's richest four-year-old of all time.
The phenomenon who in a statement from Redén this past spring would 'turn the harness racing upside down', and has done everything to live up to that, starts as the mega favorite on Sunday.
"He feels good after his last start, I trained him today (Monday) and he was good. He was very good in the semifinal last time out, he got a good trip, trotted a good time, and was nowhere near tired. He should get a little better with that start in his legs and this time he can race barefoot behind. No other changes" says Daniel Redén on his website www.stallzet.se.

"Could be great"
Glamorous Rain does not have the same pressure of being the giant favorite in the final for the four-year-old mares (V75-2), where this year's two dominant mares 2 Great Skills and 3 Lara Boko both won their semifinals impressively. But so did the reigning champion when she defeated her opponents after having trotted the last kilometer three-wide and showed that her top form has arrived at the end of the season, just like it did last year.
"She felt super already in the warm up and Örjan said that she was also much looser scoring down, so that was nice. She raced barefoot and in an American sulky so there's not much more we can do, but if she has come out of her last start well, she should be even better this time. She got a tough trip last time, but I think that start moved her up in form. And she has to, since she faces some tough mares this time. She could get a good trip from the inside post and it will be interesting" says Redén, who also saw 5 Felizia Zet secure a spot in the same final when she finished second behind Great Skills, after having raced in the lead.
"She ran into a very tough mare in her semifinal but I still think she can do a little better than what she did, she was beaten a bit too early for it to be perfect. There is more to come there. Now she has a start in her legs and we are pulling all four shoes on her. That will be the very first time, she has raced with steel shoes all around all year. We will see how it works out, it could be great but you never know. She feels good in training".

Pulling the shoes behind and maybe also the ear hood
Redén also has two starters in the final for three-year-old colts and geldings (V75-6).
The runner-up from Kriteriet, 4 Bengan got to set his own fractions in the lead in the semifinal, but got tripped out by 1 Dancer Brodde after a fast finish.
"He hadn't raced for a while before his last start, he is a big colt and maybe he got a bit tired at the end. He looked good and with that start, he should get much better. Plus, we are pulling his shoes off behind for this start and Örjan never got to pull the ear hood off of him last time out. So there's another gear for us to use. He got a good post position, too".
9 Jikken is an up-and-coming colt who challenged the top colt 3 Bedazzled Sox in his semifinal, last time out.
"He got a good trip in the semifinal and challenged a very good colt, so that was a strong effort by him. We tried pullouts on him during training today (Monday), it didn't go well the first time, but the second time went better and that will be an extra gear to use on Sunday. If there is just some tempo in the race he's no worse than anyone else, at least I don't think so. No other changes, except for the pullout earplugs" says Daniel Redén, who is the leading Swedish trainer by far with over SEK 41 million in earnings in 2022.
If he can duplicate last year's success with over SEK 4 million in earnings during the Breeders Crown Sunday, Åke Svanstedt's record from 2012 with SEK 48,073,124 as an all-time high for trainers could be within reach.