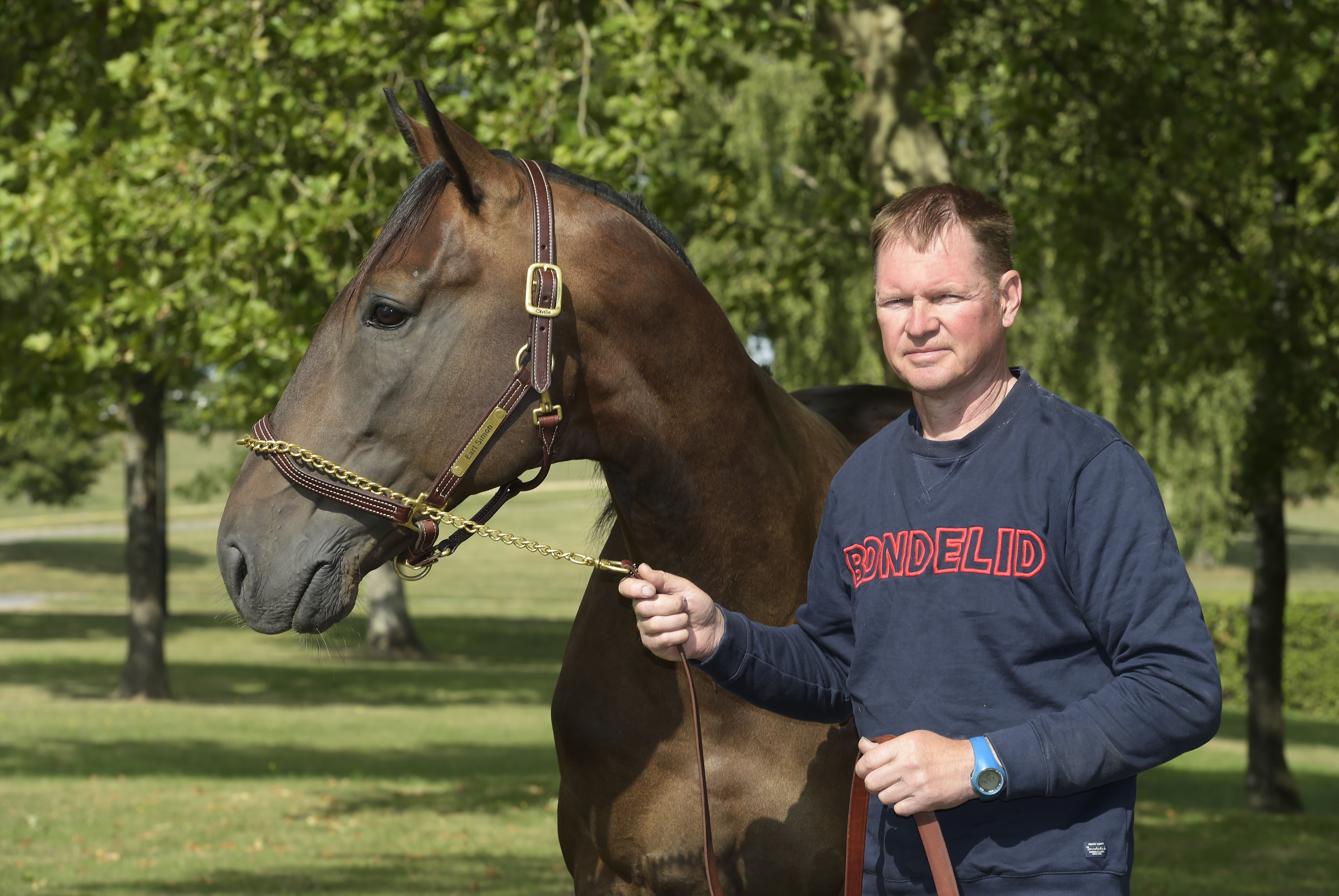 One of the best trotters in France today.
But if Earl Simon wins Elitloppet on Sunday the victory will count as Swedish in the books.
"It's too bad for the owner who has to stay home in Huddinge as the Elitlopp goes off just a few miles away from his house" says trainer Jarmo Niskanen.

Jarmo Niskanen moved from Sweden to France 25 years ago to become a professional trainer there.
He runs a stable of around 30 horses at the training center Grosbois outside Paris where the star is also the biggest star in French trotting right now.
Six year old Earl Simon is viewed by many as the country's best trotter - as of today.
Jarmo Niskanen, known for his quiet manners and careful statements, wants to tone that down a bit.
"Best trotter in France? Of the horses racing right now he might be in best form at least. I could agree with that" says Jarmo Niskanen over the phone on Tuesday of the Elitlopp week.
Earl Simon shone bright when he won at Caen a couple of weeks ago. The six year old was left alone on the track in Prix de Ducs de Normandie since the big favorite Cleangame with Jean-Michel Bazire made a break.
Jarmo Niskanen received his Elitlopp invitation with Earl Simon after the race.
The trip to Sweden by truck will start Wednesday morning for the horse and his caretaker Audrey Viel. On Saturday morning Jarmo Niskanen will fly up together with driver Franck Ouvrie.
"The horse is travelling by road and should arrive Friday around lunch time. He will stay with Stig H Johansson at Stora Alby" says Niskanen who worked for Johansson during four years before becoming a trainer himself.

'Simon' in Swedish
The old stakes star from the French E-crop has stepped up as one the best older trotters in the country this year as a six year old.
French born indeed, but the breeder and owner is Swedish.
Gunnar Sundbaum from Huddinge has owned and bred horses for many years. But with Earl Simon both blood, planets and the luck needed have all been in the exact right place for Stall Skytten - the stable name.
The horse is named after one of Gunnar's grandchildren.
So the names should be pronounced in Swedish, Simon. Not Simonn in French or in English.
"Gunnar is careful because of the Corona virus but even he wanted to come see his horse race, he wouldn't be allowed in. So he has to watch it on TV like everyone else. I think he has only watched Earl Simon race live once, at Enghien. Of course, it can't be fun not getting to go watch him now".
Jarmo Niskanen has watched many Elitlopps live. 1995 he trained Västerbo Daylight who participated in Elitloppet with her owner Michael Demmers as trainer.
"That's the closest I've been to being in Elitloppet. Västerbo Daylight had returned home to the owner a couple of months before the race but it was partly thanks to what she did in my training during the winter and spring in France she got the invitation" says Niskanen.
Elitloppet is a race you have been aiming for with Earl Simon for some time. How does it feel to finally be there so to speak?
"It feels very inspiring. But I don't know how it feel without the spectators, it won't be the same atmosphere. I hope it will be as exciting in front of the TVs at least".
What did you think when Earl Simon and Franck Ouvrie drew post position eight in the first Elitlopp elimination (V75®-6) on Sunday?
"Yes, well...that was the only post position I really didn't want of course. But we won't give up because of that. He's quick out of the gate. We have to hope that it will open up so that he can find a spot somewhere in the middle. He's safe and strong and can race from any position. If he would go all the way to win Elitloppet, that would be huge. If not, we have to come back next year" says the trainer.
What do you think of your horse's chances of winning the final - if the trip won't be too tough in the elimination?
"We have to see how his form is on Sunday. He has never done two heats but I don't think that would be a negative. The trip to Sweden doesn't bother me at all. He might lack some toughness in a race like this. But I don't think so, because of all the tough races he's been in during the last year. He will race barefoot already in the elimination, his feet are good so he should be able to handle that".
What is Earl Simon's best distance, since he seems like a very versatile horse?
"He raced very well over the short distance in Criterium de Vitesse but he has raced well over longer distances too. He always does his best. The conditions are different now that it's a 1000 meter track, but as long as there will be a good pace and everyone gets the chance, he should be able to battle for a top spot".
Elitloppet or Prix d'Amerique?
"That's two giant races that can't be compared to each other. Races who both have felt pretty unachievable! But now when we made it to Elitloppet we have to hope that we one day can be in Prix d'Amerique some day too".