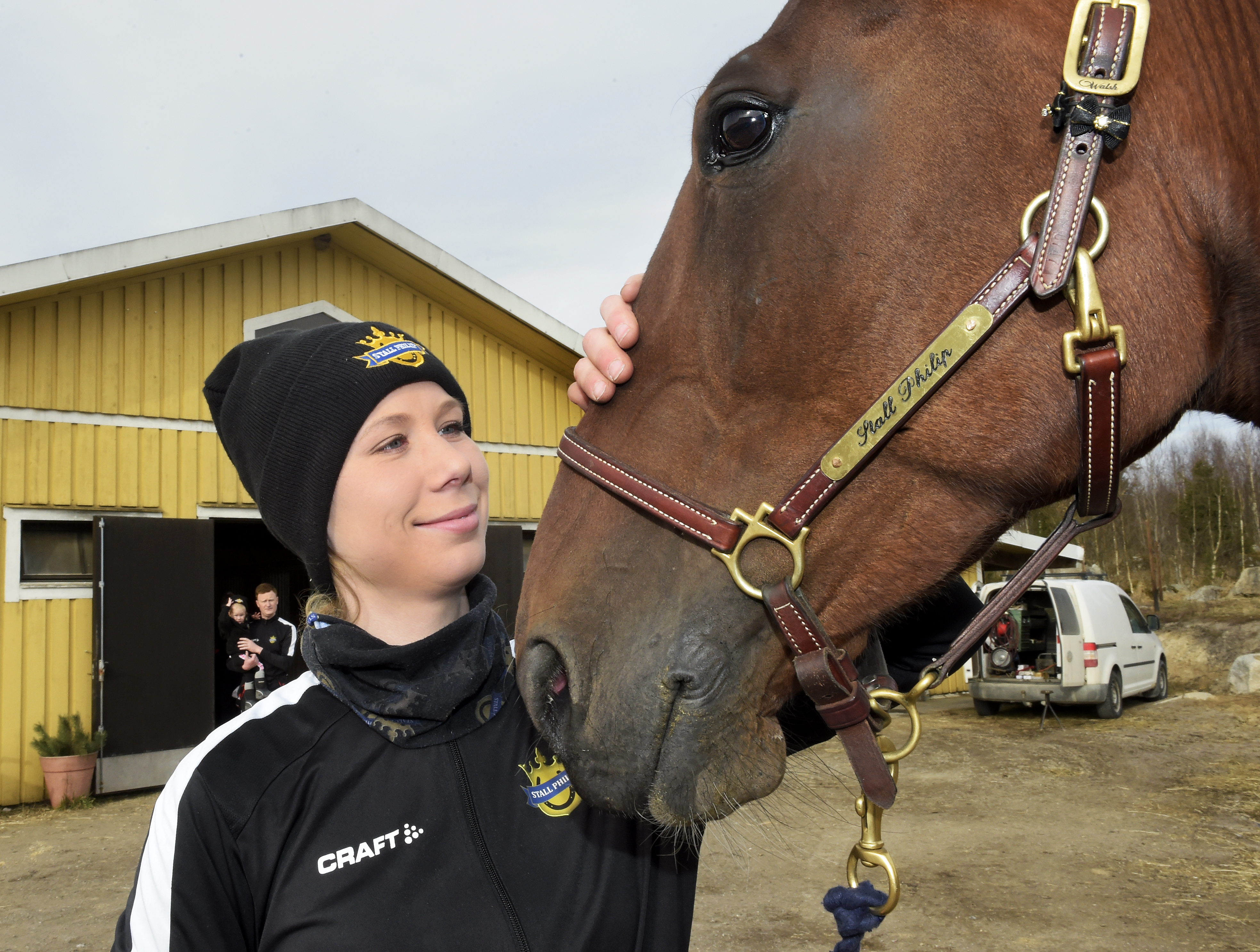 V75®: Another finalist in a classic stake race for Jasmine Ising

Jasmine Ising, 30 has soon completed the year with the first crop of horses as a private trainer for Stall Philip.
And it has been a very good year for the entire stable - to say the least.
Winners on V75, in France, horses qualified for two stakes finals and a win percent of 27.
On Saturday, two year old Icicle is racing in Svensk Uppfödningslöpning.
"We still haven't seen him all out and we don't know how good this horse is. It's very exciting" says Jasmine.

Last year she started up as private trainer for Leif Bengtsson of Stall Philip Consulting. Together with boyfriend Patrik Fernlund, Jasmine has been given the trust to buy yearlings and build up a stable of 20 horses at Julmyra Horse Center, located in Heby. It has been a very god start to say the least. They started up slowly last year but this is the year when the three year olds have started racing so it's their first 'real' year so to speak. The success was instant. The have won on V75 with Green Mamba, Star Costashorta and Borups Tornado. Three year olds like Ferox Brick, Hefner AM and especially Ester Wibb have shown their potential, the latter qualified for the Oaks final by winning her eliminations and has made over SEK 500,000 this year. Star Costashorta has two straight wins in France. The win percent for the stable is a very good 27 and the earnings so far are over SEK 2.2 million.
"That’s very good and it feels great since we've been given this chance. Even if you're given good chances there are lots of things that have to go right. But the horses have stayed healthy and have been able to train and race" says Jasmine Ising.
And adds:
"It's huge for me to have two horses qualified for big stakes finals during my first year. It almost feels surreal".
"When we started I'm sure many were wondering how we were going to handle this. But it’s not strange that people think so when someone just pops up out of nowhere and is given the chance that we were".

"An early horse with good potential - has done everything right"
Saturday is the day the biggest two year old race in Sweden, Svensk Uppfödningslöpning will be held at Jägersro. It is the oldest of all the stakes races in Sweden and it has been raced since 1926. One of the finalists is Jasmine Ising's Icicle, to be driven by Anders Eriksson. Two months ago he started off his racing career by winning at Gävle and equaling the track record, 1:15.8/1,640 meters with volt start. In his second start he finished second after having made a break and in his last start he finished second in his elimination to Svensk Uppfödningslöpning in 1:14,7/1,640 meters. He left quickly out of the gate and found a spot in the pocket behind the leader in the first turn. When he got the chance in the stretch he closed well to finsih second without having to go all out.
"He got a perfect trip and did everything right. It was a very fast finish and the driver saw that he couldn't be better than second so he didn't push him too hard. It feels like he came out of that race well and he has felt good in training" says Jasmine.
"He's a big Raja Mirchi gelding who we went to look at as a yearling since Leif owned his sister. Leif heard he was for sale so went to take a look and we liked him a lot. We bought him in August or September as a yearling and after that he's done everything right. When he made a break in Örebro in his second start, that was the first time ever he galloped".
"He's an early horse with good potential and before he qualified we had trained him in 1:23. Then he came out and won his first start in 1:15. Horses who have the talent and have been trained a lot usually go fast even if they haven't trained that fast".

"Hard to know how good he really is"
Svensk Uppfödningslöping will go off as the fourth leg on V75, which comes with a jackpot again this week. According to ATG's calculations there are SEK 55 millions in the pool for all seven winners picked, Icicle has post three behind the gate and will be among the longshots behind Per Nordström's duo Good Vibes and Islay Mist Sisu.
"He doesn't have a lot of experience and we haven't pushed him yet so it's hard to know how good he really is. We still haven't seen him all out and he's just been early and talented so far. Many of the horses in this final were racing early, but we have never pushed him. It's easy to push them too hard too early and shorten their racing careers by doing so".
"The post position is good and he is quick out of the gate and I think he will get a nice check here. It's very hard to estimate two year olds and their chances since so much happens with them from day to day. It will be exciting to see how he does".
How would it feel to win a stakes final already with the first crop of horses you've picked out and trained?
"I don't even wanna go there. If he wins, I think Patrik and I will tear down the entire track before they do it themselves for the move. I don't think it will be intact if he wins, ha ha".
"All jokes aside, it's of course huge to just have qualified for the final" says Jasmine Ising and tells us there won't be any equipment or shoeing changes on Icicle.
You also have Quite A Barbara racing in V75-2. What about her chances?
"She races well every time, but she drew a tricky post position four here with volt start and she will try to get a check in here. It feels like it's a bit too tough for her but you never know and and in these mares races you can see some upset winners. But some of the horses starting 20 meters behind her look like they are too good for her".