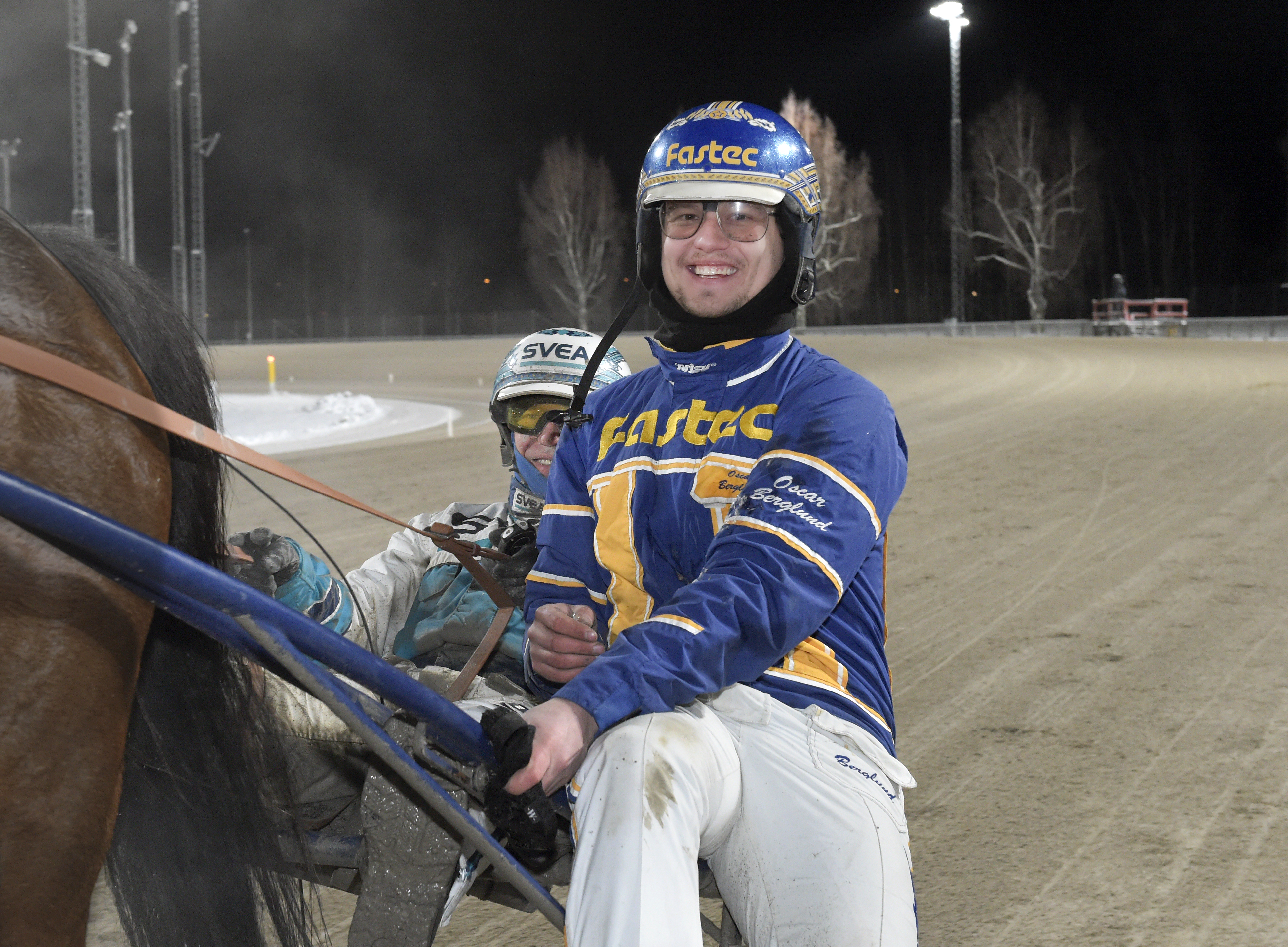 He wins as frequently as Timo Nurmos and Daniel Redén.
On Saturday, Östersund's own winning machine will perform before the home crowd.
"Of course, this date has been marked in my calendar for a couple of months" says Oscar Berglund, who has three starters on V75®.

The high winning percentage has stood out throughout his career.
But despite that the hallmark of the stable hit a bump in the road last summer, Oscar Berglund sounds satisfied when he sums up 2022.
"We had issues with sickness during the spring and it was tough for a while, but the second half of the year went well and we won more V75® races than any other year previously. So I am satisfied, and looking forward it has never looked better than it does now".
The winning percentage landed at 21, which means that Berglund loses his position as the professional trainer with the highest winning percentage. Looking back at all Swedish starts since 2017, Berglund has a winning percentage of 28, second behind Timo Nurmos at 29, and he is tied with Daniel Redén.
"With those names, I don't have to feel ashamed for not being first. It's a good group to be a part of. Of course, I'm proud of those numbers" Berglund says.
Taking in older horses and molding them into winners has been Berglund's trademark over the years, but with five three-year-olds in the stable, there are also hopes of racing in some of the stake races this year.
"We have gotten a lot younger and I have been given the opportunity to shop from the top shelves at the horse sales for a couple of years now. Of course, I dream of having good results there too, of being in any of the big stake races. The three-year-olds all feel good and they are pretty close to race ready. The winter is long up here, so the races in the fall are the ones in my dreams".

Able to stay
It was a nightmare when Berglund last year was told he had to move from his farm in Brunflo since the Swedish Armed Forces had bought the land where he trains.
But after having looked at alternatives around the country, he recently was told he does not have to move.
"There were a couple of tough months, and looking back it might have contributed to the results not being as good for a while. When something is worrying you, it often affects other things too and it was an unstable period. But a month ago I was told that I can continue to train on this track and also stay here".
So all moving plans are canceled?
"At least for the nearest future. I'm always open to progress and a part of that would be to move somewhere else in the future. But as of now, I don't have to and it feels very good".
The training tracks mentioned have contributed to the stable finding its top form. Five wins and a second place in six starts the last month are stats that stand out even in Berglund´s world.
"It has been fantastic these last few weeks and much of it is because we have had such good training conditions. Training on snow and ice is hard to beat".

Has the highest hopes for Bourne Dominion
The question is if Berglund's horses will be as tough to beat on Saturday?
V75 at the home track is an important day and Berglunds sends out three starters.
"The one I have the highest hopes for is 6 Bourne Dominion (V75-3) who has never been better than he is now. We found an issue in his back and it has most likely been bothering him for a long time. His gait is much better now and he feels very sharp in training. I think he is due for the best race of his career, then we will see how far that takes him" says Berglund, who also sounds unusually happy with the returning 10 Dwayne Zet (V75-5).
"He feels much sounder than before so I expect a good effort even if it's tough to demand a win from the second tier after such a long layoff. 6 Mellby Galanga (V75-7) is also feeling great right now, but it looks like a very tough race".
The forecast calls for cold weather, down towards -10 degrees Celsius, in Östersund on Saturday. It sounds like a frozen track and maybe corks all around for the horses.
Or?
"I don't think so. The track has been very good this winter and we have rarely needed corks in the shoes, not even when it was very cold. The track crew has done a fantastic job with removing the show and adding new material and I count on them succeeding on Saturday too. I plan on racing my horses with short corks behind and none upfront" says Oscar Berglund.

Here are Oscar Berglund's full comments on his three V75 starters:
"6 Bourne Dominion (V75-3) has actually been a good horse all along and I have been disappointed in myself for not getting better results with him. Despite him being rough gaited, we have never found any lameness anywhere. After the October start, we decided to look at the horse with a fresh pair of eyes and I got a hold of a very good equine chiropractor named Ulrika Haglund. She found an issue in his back and she worked on the horse for a month, after that he has felt better than ever before. He is no longer rough gaited and I have been very pleased with what he has done on the track in these two starts. I have just trained him today (Monday) and he felt fantastic. He also comes out of each start much better now and I count on the positive trend continuing and that he delivers an even better effort on Saturday. As always with my horses, the driver decides the tactics, but I have no issue if he would want to leave with him and I can also imagine him being able to leave faster now when he is better gaited. He used to wear half the tack room, but for his most recent start, we removed everything except for the pullout earplugs and he will continue to race like that. As far as shoeing goes he will also race the same way as in his last start, with corks behind. He is the one I have the biggest hopes for on Saturday".
"10 Dwayne Zet (V75-5) had an incredible year last year and made over a million if you include the big win on New Year's Eve. He showed high peaks when he was good enough to compete in the gold division, but the lows were very low in between, mostly due to him not being able to stay sound. He got on one line pretty hard in the races. After the season we decided to go to the bottom with it and he had surgery done in both his knees. It seems to have worked out well, he hasn't had any problems since, and he feels better and sounder in training. I hope that he will be more consistent this year and I am really looking forward to this season. I think his future looks bright, despite him being seven years old. He has gotten a couple of heats at the racetrack before his seasonal debut and the fastest he has trained is 1:16 over 2,000 meters. If you compare it to his seasonal debut a year ago, he had trained a little bit faster then, but he feels much better now. Of course, he might need a start and I would like to see him get a nice trip and cross the wire at full speed. At the same time, I wouldn't be surprised if he is good enough to win it right off the layoff. He likes racing with corks. When he won on V75 at Bergsåker he had corks in all four shoes, but I count on him only needing corks behind this time. He will race with a pull-down bridle, which he usually wears when we don't try to leave with him, and he will race in an American sulky".
"6 Mellby Galanga (V75-7) almost died from a twisted gut, less than a year ago. He had to be opened up to survive, and horses who have been through that rarely make it back to the racetrack. With that in mind, Im incredibly happy with how he has performed and he was very good last time out, in Norway, even if it might have looked better than it was in a cheap race. This is an important start for him, since many of his owners will attend and I think that racing him back-to-back weeks will be a plus for his form. With all that being said, I can't have any high demands on him on V75 with all he has been through. Everything he does now is icing on the cake and he is the one I have the least expectations on, this Saturday. We raced him barefoot upfront last time out in Norway and even if he has raced well in the wintertime in Sweden before, having to race with shoes is a disadvantage for him. We will keep on racing him with the blinkers he wore last time, he has only raced with them a few times throughout his career and he has always responded well to them".