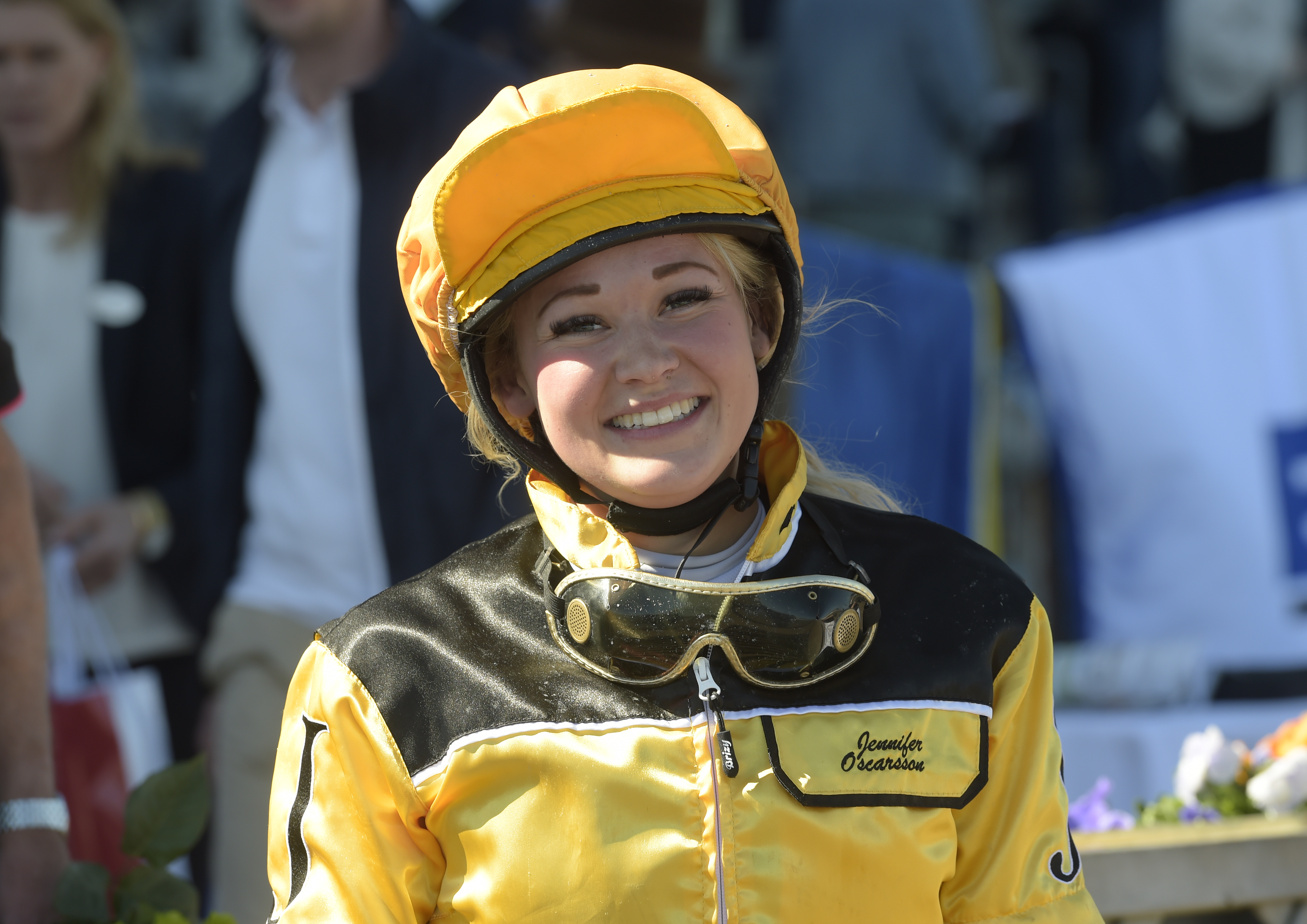 V75®​: Change of scenery could bring the first victory in the premier league of trotting

868.6 kilometers. That's the distance between Halmstad and Östersund - a move that 27 year old Jennifer L Oscarsson recently made. On Saturday she is back in the spotlight when V75®​ comes Gävle.
"I think Madonna Morique could trot 1:15 upfront so it might not be easy for the horses starting 20 meters behind us" says Jennifer.

We reach Jennifer L Oscarsson late on Monday afternoon when she has just trained the apple of her eye Brasil Boko.
"He is racing Friday at Umåker and everything felt good so it will be exciting" says the 27 year old.
Moving 860 kilometers north is a big change and that is exactly what Jennifer was looking for.
"I was tired of what I was doing and I felt that I needed to do somehing new. I haven't regretted it for a second since I made the move a month or so ago. I like it better and better every day and the plan now is definitely to stay up here in the north" says says the west coast girl.
In the everyday life of a caretaker there's more than just what the thermometer reads that counts and Jennifer has a positive aspect as to why she calls herself a Norrlander.
"Hopefully we can avoid all the rain and mud up here in the winter and train in the snow instead. I would definitely like a white winter" says Oscarsson.

"Not the same bounce with shoes"
Jennifer has worked for trainers like Veijo Heiskanen and Magnus Dahlén, but now it's the up and coming training Oscar Berglund who is her new employer.
"Oscar has been asking me a few times to come work for him, but I guess he never thought I actually would...it feels great to be up here now though" says Jennifer.
On Saturday she won't be driving for Oscar Berglund on V75, instead it's her good friend Amanda Löfqwist who trains her drive Madonna Morique.
"Her form curve has been pointing in the right direction in every start that I've driven her except for in her most recent start when she didn't live up to the expectations. The track did not fit her that day and we had to race her with shoes all around. That's her training balance and she didn't have the right bounce in her stride with shoes on. She will race barefoot this time if the track allows it" says Jennifer.

"Will make it hard for the good ones"
Many people most likely associate Jennifer L Oscarsson and her yellow colors with monté, but she thinks driving and riding races are equally fun.
"I don't really know why it has been mostly monté, but I love to race and I want to both drive and ride as much as I can if it can be combined with my job at Oscar's".
"It will feel a bit special on Saturday since I've only driven on V75 three or four times before with a third place as my best result so far".
Given that statement it's impossible to not ask why Jennifer thinks she would take her first win in the premier league of trotting on Saturday.
"Of course I'm being a bit cocky by thinking I can win but she's a nice little mare and I think she could trot 1:15 upfront".
"What worries me a bit is the volt start. I said to Amanda that it feels like she would be quick in volt start and she just shook her head. So post position two is not the best since she could be a but tricky there".
"What's good for us is that there are many horses starting 20 meters behind us which will make it harder for the good ones who are 40 meters behind us" Jennifer speculates.
No matter how it goes on Saturday all of us following the racing in northern Sweden will see more of Jennifer in the future.
"I want to ride and drive as much as possible" she says.
A win on Saturday would of course be a good way of advertising herself going into what hopefully will be a snowy winter at her new home track Östersund.