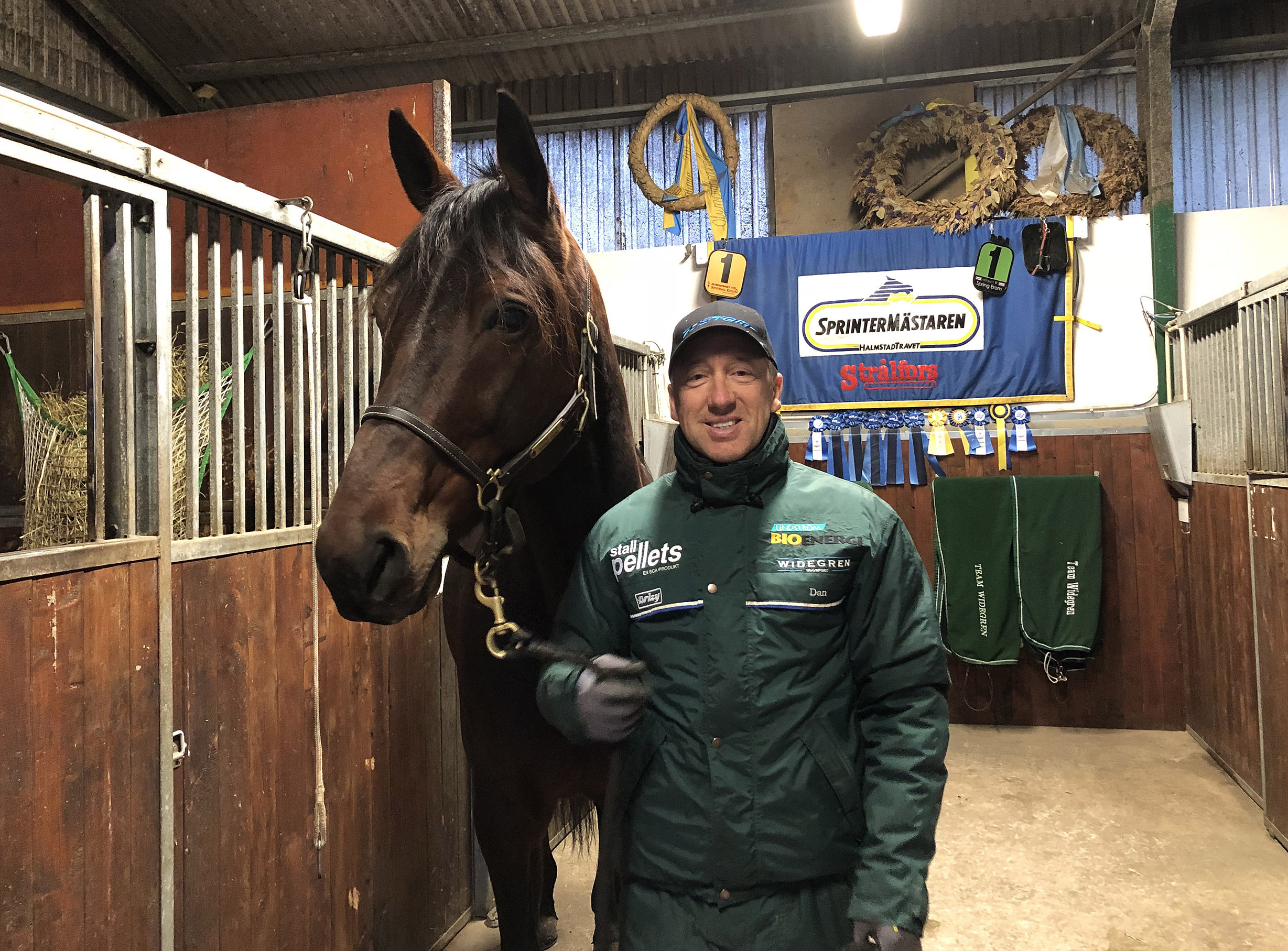 Best twelve year old in the world.
Halmstad racetrack is celebrating their star with Spring Erom's race the day before New Year's Eve.
The guest of honor is also the star of the show and he gets to make his last start in front of the home crowd, two days before he is too old for racing in Sweden.

All fairy tales must come to an end. But few has such a well directed ending as the Spring Erom fairy tale.
The energetic fairy tale has during his last season continued to win on the highest level. He also debuted - as the oldest horse ever - in the Elitlopp. In the elimination he showed a new side of himself when he made it to the final and set a new personal best with 1:09.2.
"It's fantastic that he gets to go out with a season like this, it's been magical" says trainer Dan Widegren.
The Elitlopp and the way that lead up to it really sticks out.
"He just jogged when he took his Elitlopp ticket. He had a perfect post and he was just perfect that day".
"Then he made it to final too, where he actually was locked in behind Bold Eagle. It feel ridiculous to say, but he really did. He felt amazing that day".

"Thought his career was over"
Just as fantastic as Spring Erom finishes his career with Dan Widegren, he began it with another Halmstad trainer - Håkan Olofsson. He won in twelve of his first 20 starts. As a four year old he won Eskilstuna Fyraåringstest and finished second in the Breeders Crown. The year after he won Örebro Intn’l, a race he won again in 2012 when he also won Frances Bulwark's race at Solvalla.
It wasn't a given that Spring Erom would be a star when he arrived to Håkan Olofsson's stable as a yearling. It also never was a given that would have such a long racing career.
"I guess we didn't see his potential early on. He really developed as a four and five year old. There's also been smaller and bigger issues along the way. in 2013 he suffered a fracture and we all thought that was the end of his racing career" says the now retired trainer Olofsson and adds:
"It took ten months before he was back. Once we returned to the scene of the crime he won the race".
As a matter of fact, Spring Erom won at least one race every year except for in 2013. All together he has 32 wins and in more than half of his 111 starts he's finished top three. The eight time millionaire is about to call it quits. But first the grand finale.

Full circle
Very few horses have such a long and successful career as Spring Erom's. For a full decade he's been one of Halmstad's poster boys. To honor the hometown champ, Halmstad names the gold division after him when they host V75® on Saturday December 30. And there was a thought behind that.
"We wanted him to finish up his career where he started it ten years ago" says Halmstad's director of racing Rene Jensen. A plan that worked out.
"We'll do all we can to have him in top shape for Saturday. We've done all we can, despite bad training conditions lately and hope he'll be in good shape Saturday. It's a lot of fun that he's getting this farewell and that it all worked out like this" says Dan Widegren.
The celebration will also be appreciated by his former trainer Håkan Olofsson.
"He really deserves this. Let's hope he's at his best and that he gets a chance to show what he can do" says Olofsson who's is planning a vist to Halmstad on Saturday.

Stallion duty next
Knowing that Spring Erom will turn 13 and won't be able to race anymore in Sweden, Dan Widegren looks back - and forward.
"I've been dreading it, even though I know it was coming. But it's a good rule, I think. He's an exceptional horse. I don't feel bitter at all, just proud of the horse and proud that we've been able to deliver the way we have with a twelve year old" says Dan Widegren and continues:
"It's amazing what we got to experience with this horse. In my eyes he's a super star - not just a gold division horse".
Even if his racing career is coming to an end, his next one is about to start.
"It will be interesting to see how he'll be received as a stallion" says Widegren.

Drivers on Spring Erom:
Björn Goop drove Spring Erom to two wins in Örebro Intn’l,
"He is tough as nails. He's always had a great attitude but was a little too playful early in his career. But in a race he always behaved.
He was born with a lot of talent but it takes a lot of knowledge to train a horse like that. Both Håkan Olofsson and Dan Widegren did a great job with him. It hasn't always been easy but he has a great attitude and a heart of gold".
Erik Adielsson drove Spring Erom to a victory in Frances Bulwark's race.
"In his younger years he didn't have the best gait but the gutsy attitude was always his trademark. He was a handful early on, almost on the mean side if I recall correctly. But as he got older he got a little more mellow".
"My best memory is when we won Frances Bulwark's race. It's almost on the day five years ago. Another great memory is finishing second in Copenhagen Cup last year. It was a tough loss, he raced one of his best races of his career and it would have been fun to win".
Christoffer Eriksson drove Spring Erom in the Elitlopp.
"His best feature is his attitude. He's hard on himself like that. He also wants thing his own way and scoring down you have to let him call the shots. Once the race starts, it's like he never done anything but race. But he does have quite a few start too".
"He's been fantastic all year and it's pretty cool that he made it to the Elitlopp as a twelve year old and was so good. That was a lot of fun. It's been a lot of fun driving him this last year of his career".