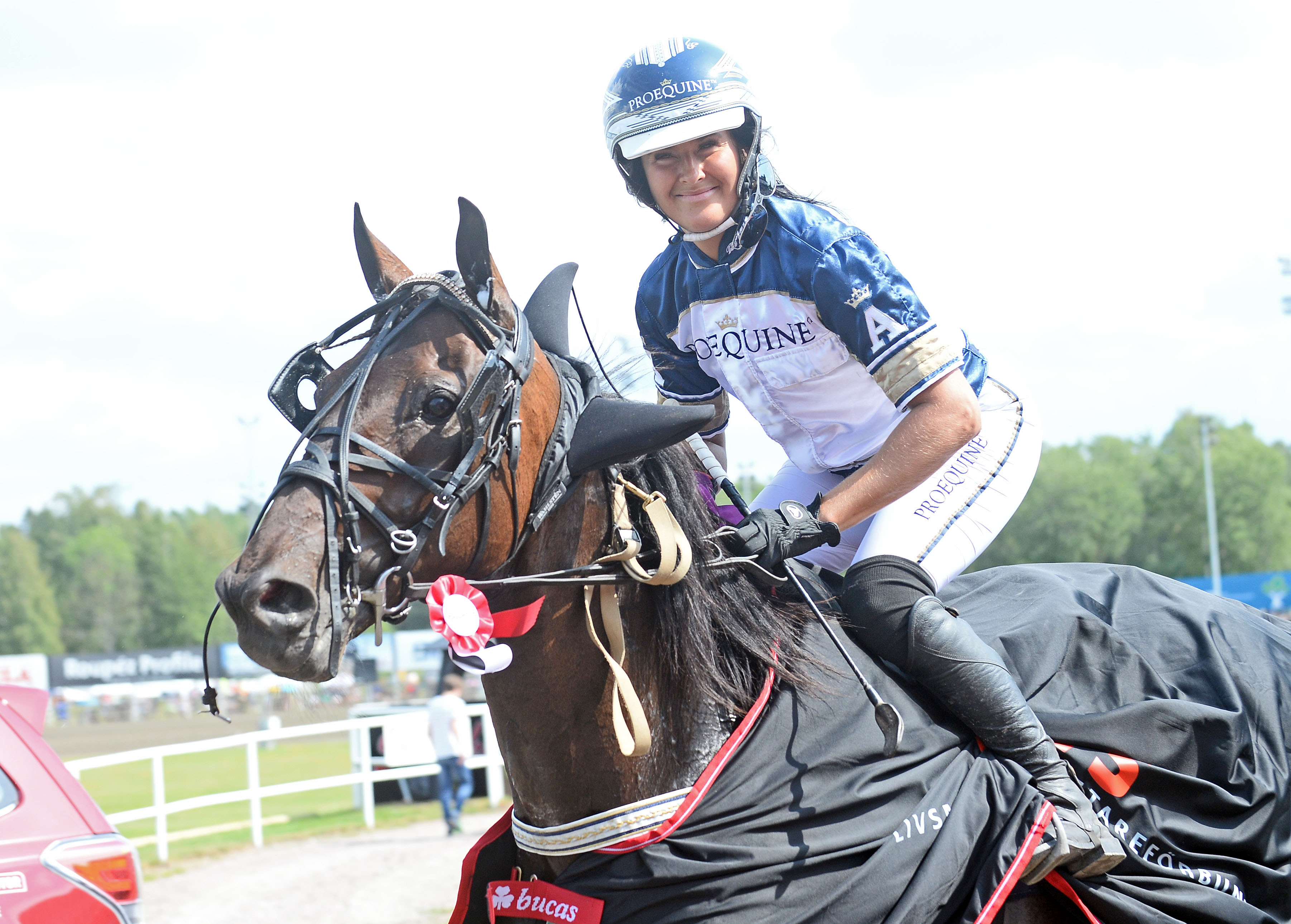 Last year she had to swap her chances to win for the hospital bed after having suffered a fracture when training a horse only ten days before the big Swedish Championship day at Åby. On Saturday Sofia Adolfsson has three chances to get her revenge and she is in the spotlight, especially in the Swedish Championships in monté.
"Rajesh Face is my best chance to win gold on Saturday" says Sofia.

She is both a nurse and Sweden's best monté jockey. Last year the plan was to win the Swedish Championships for monté jockeys with Börge, but that training accident ten days before the championship day ruined her plans and instead she had to spend the Saturday as a patient at her own work place.
"That was a really tough time, but I've overcome that now and I feel completely recovered form that accident" says Sofia.
Sofia Adolfsson was the monté champion in Sweden 2016 - 2018 but has cut down on racing since then. She had 188 starts in her record year 2018, while this year she has 92 starts so far.
"I moved down to Halmstad for a while and had to cut down on racing a bit. I think the level I'm at now is good, I have to have time to do my day job too".
"You always want to ride more and especially good horses, but the competition among jockeys now is much tougher compared to a few years ago and there are more competent jockeys fighting for the rides now. It's better for the sport that there are more and more competent jockeys now" says Sofia.

"The first timers can get more lactic acid"
Monté on V75 is a watershed among the bettors and a key issue is that horses who have never before raced in the diciplin come out on V75. Sofia is happy to help us sort it out.
"I think the Swedish Championships in monté looks very interesting with many horses who can leave quickly. ".
"It will be exciting to see horses like Chianti, Pastore Bob and Baron Gift race for the first time under saddle, even if it obviosuly makes the race tougher to analyze since we don't know how they will race under saddle".
What are your experiences of elite horses racing under saddle for the first time?
"It's very indivdual, but these are very good horses. I don't see them having any issue handling that. What I do know based on my experiences is that they could get more lactic acid due to using other types of muscles that they normally don't use when racing in the sulky. Usually you test it out in training first so normally it shouldn't be an issue" Sofia explains.

"Been stable for me"
According to the bettors, Rajesh Face is Sofia's best chance to win on Saturday and she agrees. The duo has won three out of the six starts they have made together.
"Even though the competition is tough, I won't be surprised if Rajesh ends up being the favorite on Saturday. He comes into the race with two strong starts in monté and he also raced well in the sulky after making making a break at Solvalla last week".
"My feeling is that Adrian Kolgjini has gotten this horse in very good form and he is also one of the horses with the most amount of talent in the race. I think very highly of this horse, but he has to be in the right mood too".
"He has to get the type of race he wants - you can't control him too much. Many times when he has made breaks it has often been early in the races and we will try to get a nice safe start and get him comfortable. I have to say that I feel that we get along well, he has never made a break under saddle" says Sofia.
It sounds like you could take your second gold medal in the Swedish Championships in monté on Saturday?
"If the horse is right we should at least have a decent chance. He has an advantage versus the first timers since he is used to the diciplin and he also won't suffer if the pace is high" Sofia speculates.

"Very happy with a pocket trip"
It's not all monté for Sofia on Saturday since she has also qualified for the Swedish Championships for female drivers with Ulrika Wällstedt's seven year old gelding Untilwemeetagain. The duo has two second places in two starts together so far.
"I was lucky in the draw overall for Saturday and post position one is perfect for him".
"We finished second in the elimination behind Rally Gunnar and I was very happy with that but the final is a tough race. Both Spartak Face and Sef Explosive can trot a low 1:13 on the distance".
"We have the optimum conditions to challenge them and we know that these type of races usually have a high pace. My horse can leave OK and I would be very pleased if we can sit in the pocket or third along the pylons, preferably behind Spartak Face. If the pace is high throughout the race we know that the ones who have saved their horses are the ones who get to cash in at the end".
"Untilwemeetagain is a strong and kind of a lazy horse that would benefit from a high pace" says Sofia.

"It's not every week I have two chances to win on V75"
Besides the two V75 starters, Sofia will also ride Jasmin Band for the first time in the Swedish Championships for monté jockeys, which is programmed as V4-1, the first race of the day.
"I've never ridden her before but I've seen that she has raced well under saddle. This race came out very tough though and my favorite to win it is Quite A Quality who is a very good horse. It will also be interesting to see Mistelns Napoleon under saddle - he won't be easy to beat if he can hold up the lead. And both Gretzky B.R. and M.T. Nordic Spirit have raced well, but they had no luck in the draw".
"For me to win this race, I need some luck along the way but either way it will be a lot of fun on Saturday. It's not every week I have two chances to win on V75" says Sofia.
Regardless of how the Swedish Championship day turns out for Sofia on Saturday it should be a better day than last year's.
The racetrack is a much better place than the hospital bed for the energetic girl who turns 29 on Saturday. Everything is set for a great weekend in Mölndal with three chances to win a gold medal and on top that a birthday. If there's a big celebration going on in Gotherburg on Saturday, the odds are not high that Sofia is the one in focus there as well.