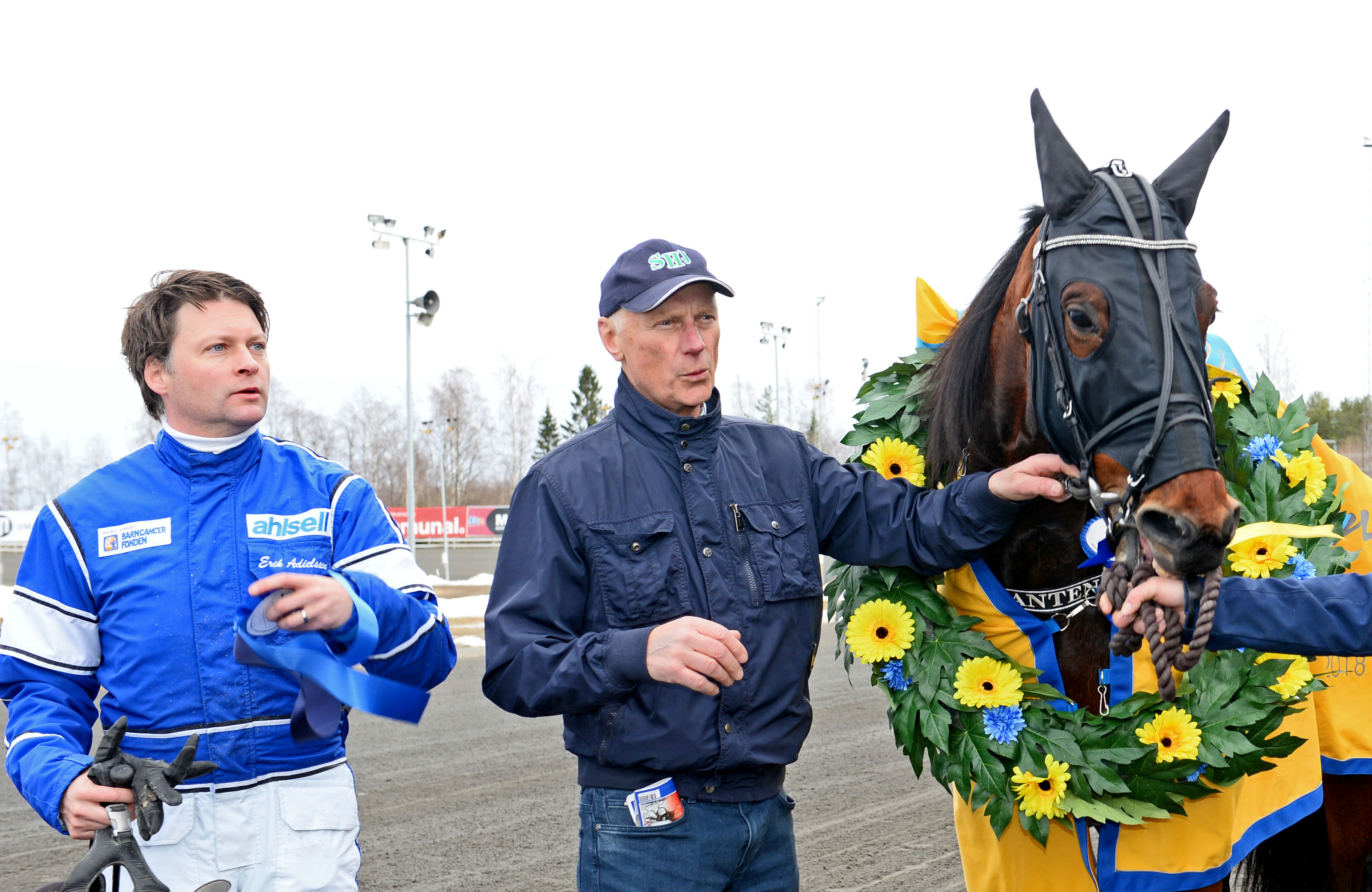 After a long time of bad luck Diamanten finally got a win in his last start.
Peter 'Foppa' Forsberg's star trotter will now be the favorite in Silverörnen on Saturday, a race that will be held in Foppa land, at Solänget racetrack in Örnsköldsvik.
"Diamanten is a horse I value highly. I think he should have a decent chance to win" says his trainer Stig H Johansson.

V75® on Saturday comes with a jackpot which means that a sole winner would take home SEK 49 millions with all seven winners picked. The feature of the day comes in the last leg of V75, where Diamanten will be the favorite in the gold division. The star trotter is not only a noble horse himself, so are his owners - Forspro AB - ex NHL star Peter Forsberg and his father Kent who has coached Sweden's international hockey team Tre Kronor. Peter has won this race twice before, as part owner of the horses Orbit Air and Real de Rabut. He now has the chance to win Silverörnen för the third time and the person who can help make it happen is none other than Stig H Johansson who trains and manages Diamanten. The legend and the the biggest of all times in the Swedish trotting industry is still going strong at age 75. When Diamanten recently took an easy victory in Ego Boys Minne in Rättvik it was a long awaited victory for Stig H.
"Things haven't gone his way. He has gotten locked in, he's had bad post positions and he's been pressured hard by his opponents. He was simply due for a win. He deserved that" says Stig H.

"Was nice to see him in his last start - a good effort"
The win in his last start was Diamanten's first win since he won Ulf Thoresen Grand International in Jarlsberg, Norway in July 2018. During the fall of that year he was injured and was away from racing for ten months.
"He had a long period of time where he wasn't sound and we had to work hard on that. Since he came back to racing things haven't gone his way in the races and it hasn't been his fault. But that can happen sometimes when you're not having any luck and the others start driving against you. That's why it was so nice to see him in his last start. He left well and he looked good the entire race. He won easily and it was a good effort" says Stig H.

"Celebrated at home on the farm - a very good time"
The Solvalla trainer turned 75 earlier that week. Diamanten's gold division win was a nice birthday gift for his trainer.
"Yes it was. Diamanten is horse we value highly and he is the best older racehorse I have now. So it's nice when things work out and everything did this time".
How did you celebrate your big day?
"We celebrated at home here on the farm and a lot of friends and family came over. It was a very nice day".
Let's go back to Diamanten. If you throw him in with all the great trotters you have trained over the years, where would he end up?
"Well to do that I think I would need a long list over all the good trotters I've had, haha. I have had many that were right on his level. But if I have to to guess roughly I would say that he would end up in the top 15 of all the trotters I've trained in my career. I would think he's right around there".

"He has learned to leave well - should have a decent chance"
"Erik Adielsson will do the driving as usual as Diamanten will be the favorite in V75-7. The horse showed that he can leave fast in his last start and it looks like he could get to the lead again.
Trainer Johansson is optimistic and is hoping for another victory for his gemstone.
"I think he should have a decent chance if they don't go speed crazy or he runs into any trouble along the way. If the horse is as good as he was in his last start he should have every opportunity to win again. Everything seems like he will be, he feels good and sound in the slow intervals he has trained here at home. He doesn't train at any faster speeds in between starts. He doesn't need that once he's in racing form".
"He has learned to leave well, even if he might have done so earlier too, but we have fired him out of the gate a couple of times now and post position three should be a good place to start from. The owners are from up there and it's fun for them to have his horse race in their own neighborhood so to speak. He raced barefoot and in an American sulky in his last start and will do so again".

"I want a slower pace nowadays"
How does your training stable look nowadays?
"We don't have as many horses as we did during a long period of time when we were very successful. But part of that is by choice. I want a slower pace nowadays and not having to go everywhere to race. We have twenty horses in the stable and thats's good number for me".
You have returned to racing and been driving a few times lately. How has that been for you and does that mean we will see you on the tracks more frequently in the future?
"It just happened that way and I love to compete. that doesn't go away so easily I think and the horse I've driven, Fixi Mearas, is a nice horse too. It's been nothing but fun".
So you won't be driving Diamanten anytime soon?
"Eh...I haven't planned that. Yet".