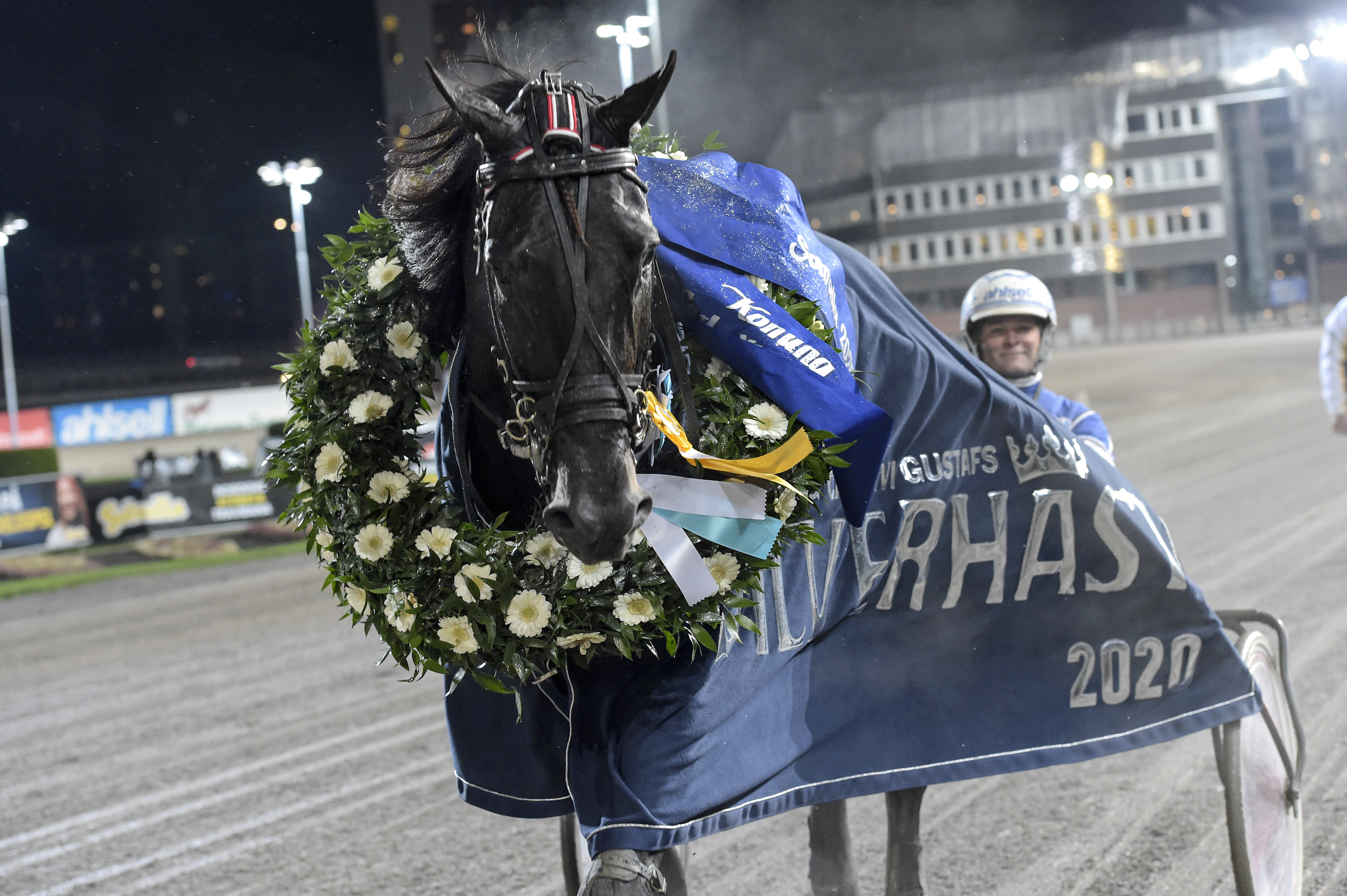 V75®: Last start of the year for Very Kronos - turns down France

After his impressive victory in the gold division final he is back at it again.
Very Kronos is racing again already this Saturday in Legolas Minne - but the plans to race in France and Prix d'Amerique this winter are cancelled.
"We will make one more start and that's it for the year. Then we will focus on winter training and getting him ready for the big races in Scandinavia next year" says Svante Båth.

Very Kronos has stayed flat for five consecutive starts and has turned into Mr Reliable himself, even if the trainer would never use those words. The very capable, dark brown stallion has been ultra impressive during the fall and after winning the Swedish Championships he has won two more gold division starts and the victory in the gold division final last Saturday was very impressive. Many people wanted to see the horse race in Prix d'Amerique in January after his impressive victory. Trainer Svante Båth says now that all plans of taking the horse to France are cancelled.
"He will make one more start - this Saturday - and after that we will shut him down for the year. I talked to the owner (Kjell Johansson) Saturday night and we decided that after this start at Åby we will train him over the winter and get him ready for the big races in Scandinavia next year" says Svante Båth.
"We had looked at a race in France on December 19 that could have been interesting, but since there's 'only' €25,000 to the winner and you have to travel back and fourth for just one race with everything that's going on in the world right now, then we said we might as well just race here at home for the same money. It would have been different if we had more starts lined up for him in France, but it was only this one start that was interesting".
So no Prix d'Amerique this winter for him?
"No, that was never on the table for him and we have to take care of the horse a little bit too. You can't be in the big races in France all winter and also race n the big races here at home the following spring and summer. He has only earned SEK 3.3 million so far and we will go for the big races here at home next year with him instead".
What do you think about Very Kronos' effort last Saturday? Was that one the best races of his career?
"Yes, I have to say so. In the Swedish Championships he was also very good and he is good, very strong and tough once he minds his manners. He has an incredible will to win".
"Erik thought he was a bit sharp even if he was able to rate him. I also thought that even though the tempo was high, it wasn't an impossible tempo for him".

"He was four to five meters better"
What was the difference between his effort this past Saturday compared to when he finsihed second behind Cyber Lane at Jägersro? Was Very Kronos better or was Cyber Lane worse, since the result was the other way around this time?
"I would say it comes down to four to five meters in each direction. Very Kronos was probably four to five meters better than he was at Jägersro and maybe Cyber Lane was four to five meters worse this time than what he was at Jägersro. That's how small the margins are between these top horses. Whoever has the best form that particular day will win and I think for Very Kronos it also matters that he has been able to race consistently lately".
Speaking of racing consistently, Very Kronos is back at it again already this Saturday. He will start in Legolas Minne, which is also the gold divison, V75-5 at Åby. He should be the giant favorite from post position ten behind the gate, together with Erik Adielsson. Racing back to back weeks doesn't bother Svante Båth.
"It's no problem for him to race back to back weeks. The week before the Swedish Championships he had traveled 800 kilometers north to race at Skellefteå. Last Saturday all he had to travel was 20 kilometers from his stall to Solvalla".
Do you feel that he is completely safe now after having stayed flat for five consecutive starts?
"Well, you can never say for sure that this is in the past, that I can trust him now. He could still jump it off or get himself into trouble but I feel that during the past two years he has steadily become better. I think he has simply just matured".

"I won't lose any sleep over it"
On Saturday all horses have to race with shoes, since it's forbidden to race barefoot after December 1. But it doesn't seem to bother Very Kronos who raced just as well with shoes already last Saturday?
"Shoes or no shoes is not the issue, even if I think he gets even better without them. He gets a bit stronger when he can race barefoot. But we're talking nuaces. I won't lose any sleep just because I can't race him barefoot".
It's Monday afternoon when we are doing this interview, so Very Kronos has only been in the field since he last raced?
"He is racing back to back Saturdays but he will actually do track work for four of the days in between starts. He doesn't like when he doesn't get moved. He has jogged today and he will train intervals tomorrow. I will never just turn him out, he will train all winter".
So if he stays flat again he sould take his third consecutive win on Saturday?
"In this game you can't have a bad day, then you won't win. It's all nuances. But I agree that it feels very good" says Svante Båth.