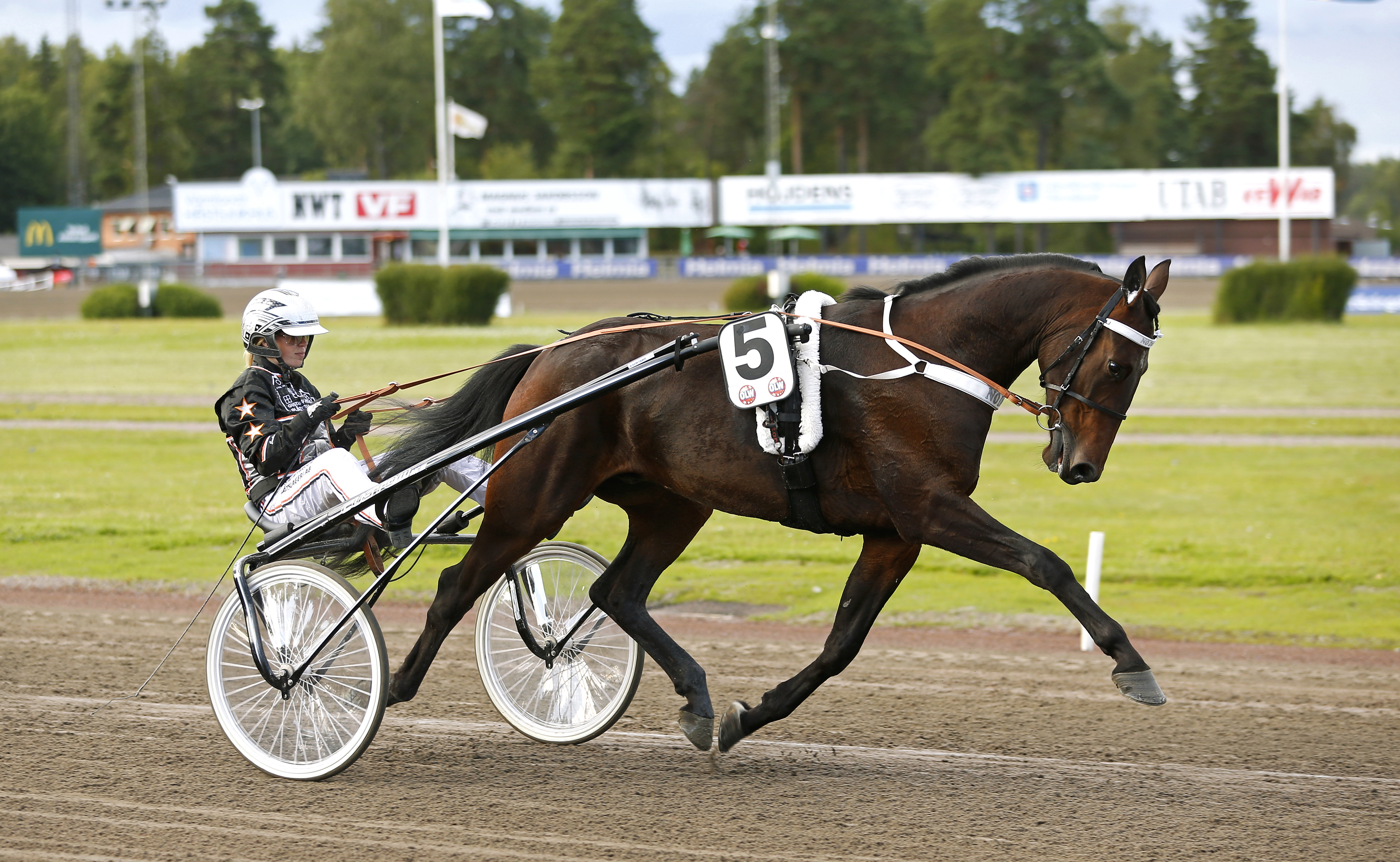 He was very impressive when he won his elimination in a new Swedish record, 1:10.5.
No Doubt - who is trained, part owned and also bred by Emilia Leo - is one of the favorites to win the final.
"It feels huge. My dream is to race him in the lead" says Emilia Leo.

She has been very succesful as a driver and even more so as a monté jockey the last few years. But Emilia Leo, 28 is also a trainer with a small stable. A year ago she bought a farm near Romme racetrack in Borlänge and she currently trains seven horses there. One of them is the very promising No Doubt who got his breakthrough last Monday. He won his E3 elimination in a new Swedish record - 1:10.5 over 1,640 meters started with the gate. He did it despite spending most of the race parked outside the leader.
"It was a five star effort, for sure. I thought before the race that he could go 1:12. Winning in 1:10 is incredible. It's almost impossible to decribe how huge it is for me that my horse comes up with such an effort. It will take a while for me to understand how good he really was in his elimination" says Emilia Leo.
"My plan before the elimination was to try to win the race to get a good post position in the final. Everything seems well with him afterwards and he seems to have come out of the race in the best possible way".

"Showed talent early - a happy and positive horse"
No Doubt has won four out of nine starts and has earned around SEK 300,000.  Besides training the colt, Emilia is also part owner and breeder together with her mom. She noticed early that he was something out of the ordinary.
"Since the day he got broke as a yearling he has had a great gait. He has always trotted with head low and had that nice bow to his neck and just been a looker. In the winter coming two he showed us that he had a lot of talent".
"He is so clean gaited and he doesn't need any boots at all - in training or racing. He is such a nice trotter who likes to work. A very happy and positive horse" says Emilia Leo.

Bit off Emila's mom's finger
The latter can not be said about No Doubt's mother, Als Alicia. She bif off one of Emila Leos' mom's fingers when she walked out to her in the field.
"She is actually plain mean or dangerous and sour nine out of ten days. When she had her last foal this spring, a half sister to No Doubt, my mom got a little bit too close to them the first few days and she bit of her middle finger, she lost the tip. So we said this will be it for her. But now when No Doubt has been so good we might take some more foals on her".
"She foaled late this year so she didn't get bred. The plan was to not breed her anymore.  But now I have talked my mom into breeding her again next spring".
So the mom's meanness didn't get passed down to No Doubt?
"No, he's the exact opposite. He is such a cool colt who never has a bad day. But I think he got some toughness from his mom and it comes out in the races. I think he got his big heart from her, he's very tough on the track" says Emilia Leo.
How does it feel for you as a small and relatively new trainer to have a horse in an E3 final?
"It's huge being in it and even more so when your horse has a chance to win. It's a little special when I train him and when I've also bred him. I've gotten the chance to drive many good horses for other trainers, but the plan is to train some more horses. I'm expanding the farm that I bought".

"I think he has a good chance - might be first time in an American sulky"
No Doubt has a perfect spot, starting from post position two in 'the short E3 final'. The distance is 1,640 meters and it's an optimistic Emilia Leo who will enter the track for V75-6 on Saturday.
"He has a good post position and I will do all I can to get to the lead. I would like to avoid getting parked if I can, he won parked out in his elimination, but I didn't want to sit in behind the leader. He has raced best without a horse in front of him so far and from post position two I don't have to stick to a certain kind of tactic. But my dream would be to race him in the lead" says Emilia Leo.
"I think he should be one of the favorites and in the lead I think he has a good chance to win. The fact that the race is at our home track is also an advantage. Now I can just put a lead shank on him and walk him down to the track instead of shipping him somewhere.
Any changes in shoeing or equipment?
"I might race him in an American sulky this time. But I won't decide that until after the warm up. If he is going to race in an American sulky, I think I want to warm him up in it first. Other than that he will go barefoot and with a blind bridle like before".