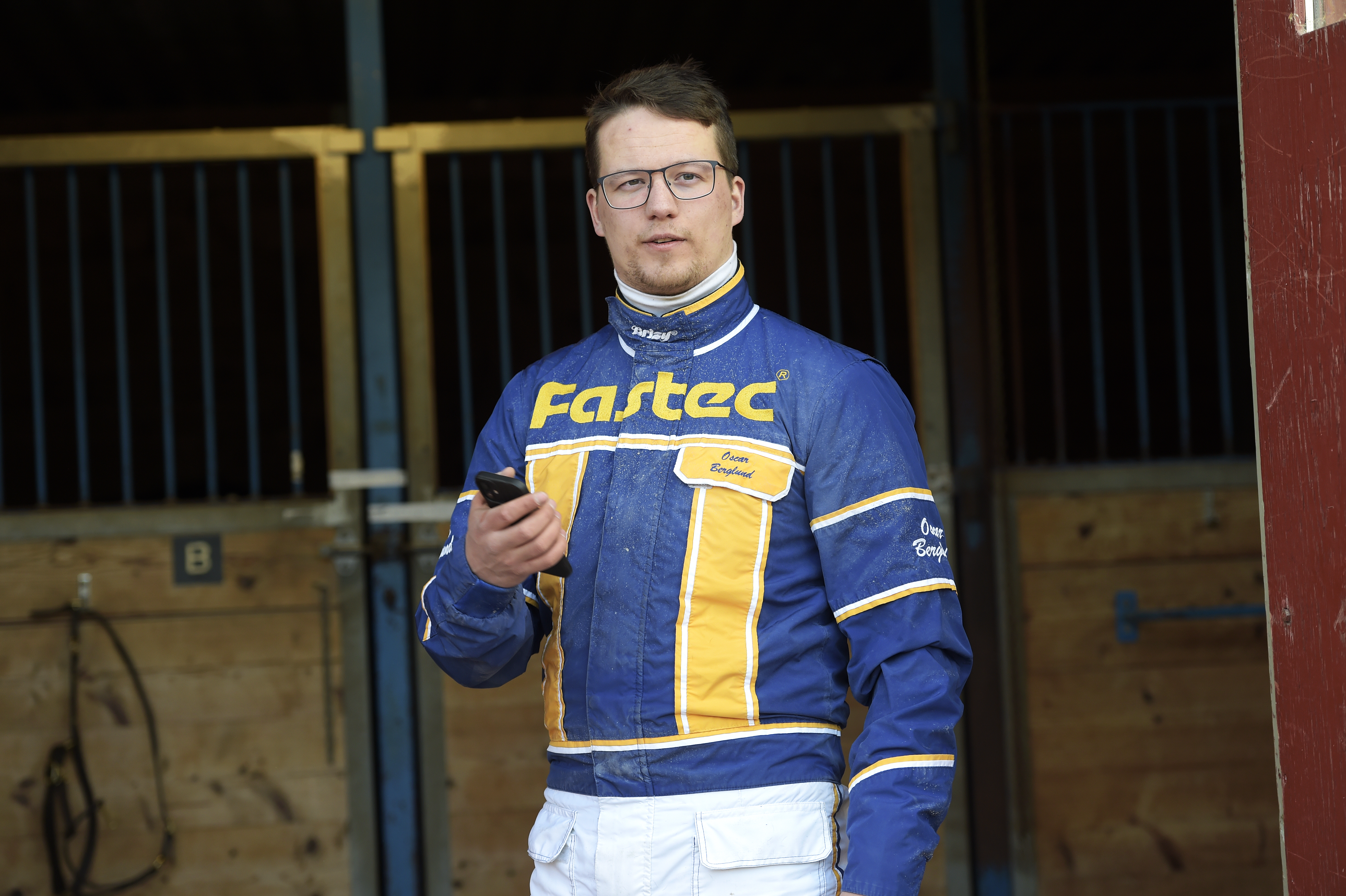 He has had the highest win percentage in the country over the last decade. But on V75®, Oscar Berglund has not been able to dominate in the same way.
"It's terribly tough on Saturdays. Obviously, I wish we would have won more often but I'm sure everyone in the business does" says Berglund who has three starters on V75 this week at Bergsåker.

In the overnights, Oscar Berglund is always a force to be reckoned with.
As a matter of fact, nobody can match the win percentage as the Östersund-licensed trainer.
Since the start 2013, Berglund has  – according to travfakta.se – won 155 out of 563 starts on Swedish soil.
That gives him a win percentage of 28, something that no other trainer with over 500 starts can match.
Second best is Petri Puro (win percentage of 26), Timo Nurmos (25), and tied for fourth are Daniel Wäjersten and Daniel Redén (they both have 24 percent).
Not a bad list to be first on.
But when it comes to V75®, Berglund is just one in the crowd with a win percentage of 11.
Still a lot better than what he thinks himself when asked how often he has won in the Premier League of trotting.
"I guess the percentage there is five, or three perhaps" he answers spontaneously.
Many trainers would of course dream of winning more than average when they race on V75, but when you win most often in the country, one win in every nine starts is not much to brag about.
To brag is something that Oscar Berglund is very careful not to do.
Instead, he manages despite all his success, to stay very humble.
"I have learned that, in order to win on V75, everything has to work out perfectly. Of course, you want the horses to be able to win every time you race and I wish it would have happened more often, but it's not easy. First off, you need a very good horse, then you need a very good driver and you also need racing luck".

Best without shoes behind and over the middle distance
When it comes to pointing out his own strengths and weaknesses, Berglund is more accurate.
We gave him some questions to see if he knows how he reaches the successful results.
At which time of the year do you think you have the highest win percentage?
"I would say in the middle of the summer".
Answer: Berglund has the highest win percentage in the fall (32), followed by the summer, the spring (25), and the winter (23).
Comment: "Yes, I guess that makes sense and I'm sure it has to do with the fact the winters are longer up here. That means I have to wait a bit to start racing the horses and they won't get in top form until later. That I have the lowest win percentage in the winter is because I hate racing horses with corks in their shoes".

At which distance do you think you have the highest win percentage?

"I would guess middle distance and up".
Answer: Berglund has the highest win percentage at the middle distance (30), significantly better than both short and long-distance races, where his win percentage is 23.
Comment: "I like longer distances generally speaking. In a 1,600 meter race, you are vulnerable if you have a bad post position. But why it's the middle distance and not longer distances, I don't know. I train my horses to be strong and durable, so they can handle tough trips. But I guess all trainers do".

With which balance do you think you have the highest win percentage?
"I can guarantee that it's when they race barefoot behind. I have many pacey horses. I like to have weight on them upfront, since the engine is in the rear".
Answer: Berglund has a win percentage of 40 when he races his horses barefoot behind, to compare with the second best balance, shoes all around - where the win percentage is 26.
Comment: "Exactly what I thought. I think trainers in general choose to have horses who are pacey over horses who interfer a lot and have to race barefoot upfront, they usually have problems with their gate. A horse who is close to pacing often has a higher ability".

Optimal balance and distance
On Saturday, Berglund has three starters on V75.
9 Dwayne Zet (V75-1) closed out last year by winning Sylversterloppet on New Year's Eve, with a SEK 500,000 first prize. In his last outing he returned to the races and sprinted home to finish third. The horse is entered barefoot behind in this middle distance race, best possible conditions for a Berglund trained horse.
Here is what the trainer says:
"I was very pleased wit how he crossed the finish line in his seasonal debut. But the way he acted throughout the race was a big questionmark. He didn't pick up the bit until the last 400 meters, before that he was just free-wheeling and that's a behaviour I haven't seen in him before. I don't like excuses but the only explanation I have is that there was a recall in which the starting gate hit him in the head. After that he was a bit nervous and uncomfortable. I can't say for sure that was why, but that's the only explanation I and Magnus (A Djuse) have. In training before and after that start everything has been normal and he felt fantastic when I trained him today (Monday). The way he felt, the form should be just as good as it was in his last start of last year. He was a bit pacey in his last start so he will race with shoes upfront, which we found is no disadvantage. I don't think racing with a regular style sulky is a negative thing either, Magnus has said that he thinks the horse relaxes better then. He's a very good horse and I always think I have a chance to win when he races, but it's also a very tough race".

Blind bridle and pullout earplugs
Next horse out from the stable is 8 Firefoot (V75-4), a horse that was also bought from the Daniel Redén stable and who is undefeated after four starts for his new trainer.
"After I sat behind him the first time I said to the owner 'this horse will win five in a row'. It was in a jokingly way, but now he has won four in a row, so we're close. But you have to keep in mind that the difficulty level increases in a V75 race. Except for the fact that he faces tougher competition, he also drew a bad post position. He needs to really step it up to have a chance to win, but the horse has done everything right for us and there is nothing saying that he wouldn't be able to step it up a couple of notches. We will also change from an open bridle to a blind and we will add pullout earplugs for the first time, we have waited for this race to try that and it should have a great effect on him. The horse has been raced aggressivley but that's mostly coincidentally, due to the fact that he has had good post positions and it's also Magnus' driving style. I don't give the drivers any driving instructions but I look forward to the day when he gets a nice covered up trip. At home he always trains behind horses and he seems to like that. On the other hand, he can leave faster than what he has shown so it wouldn't surprise me if Magnus wants to take a shot and leave with him. You have to be humble from this post position and I'm happy if he races well, even if it would only get him a third or fourth place".

First time barefoot all around
Last one out is 11 No Limit Express (V75-6) who has raced on V75 this past winter where he has finished second twice and in his last start he won convincingly against easier competition.
"He is a real talent with a nice pedigree and good strength. But I think he might be in over his head here. He is new in this class and he is still pretty green and I can't ask too much of him yet. On the flip side he always races well and I'm sure he will be improved off of that last start. He also trained today (Monday) and the caretaker was very pleased so the form is no worse than when he has raced on V75 earlier. It's just the tougher class that makes me lay a bit low with him. He actually lost a front shoe in his last starts, a pretty heavy shoe with a pad and it was good of him to stay trotting the entire race. That makes me think that he will be perfect barefoot all around and it should be a huge improvement for him who has awalys raced with heavy shoes upfront. He has gotten tough trips in every start and he seems to like that, he likes to sweat, but I don't think it would be negative for him to get a covered up trip. There is nothing in training that suggests so. But as usual, the tactic is up to Magnus".
How do you like your horses' chances all together?
"No Limit Express is, like I said, the one I have lower expectations of this time, just because he's in a tough spot. It looks more interesting for my other two horses, but from tough post positions I can't demand of them to just go out and win. I am certain that all three of my horses will come up with great efforts, then it's up to others to estimate their chances. There are days when I go home disappoionted if I don't win, but Saturday is not one of those days. I know how tough it is on V75" says Oscar Berglund.