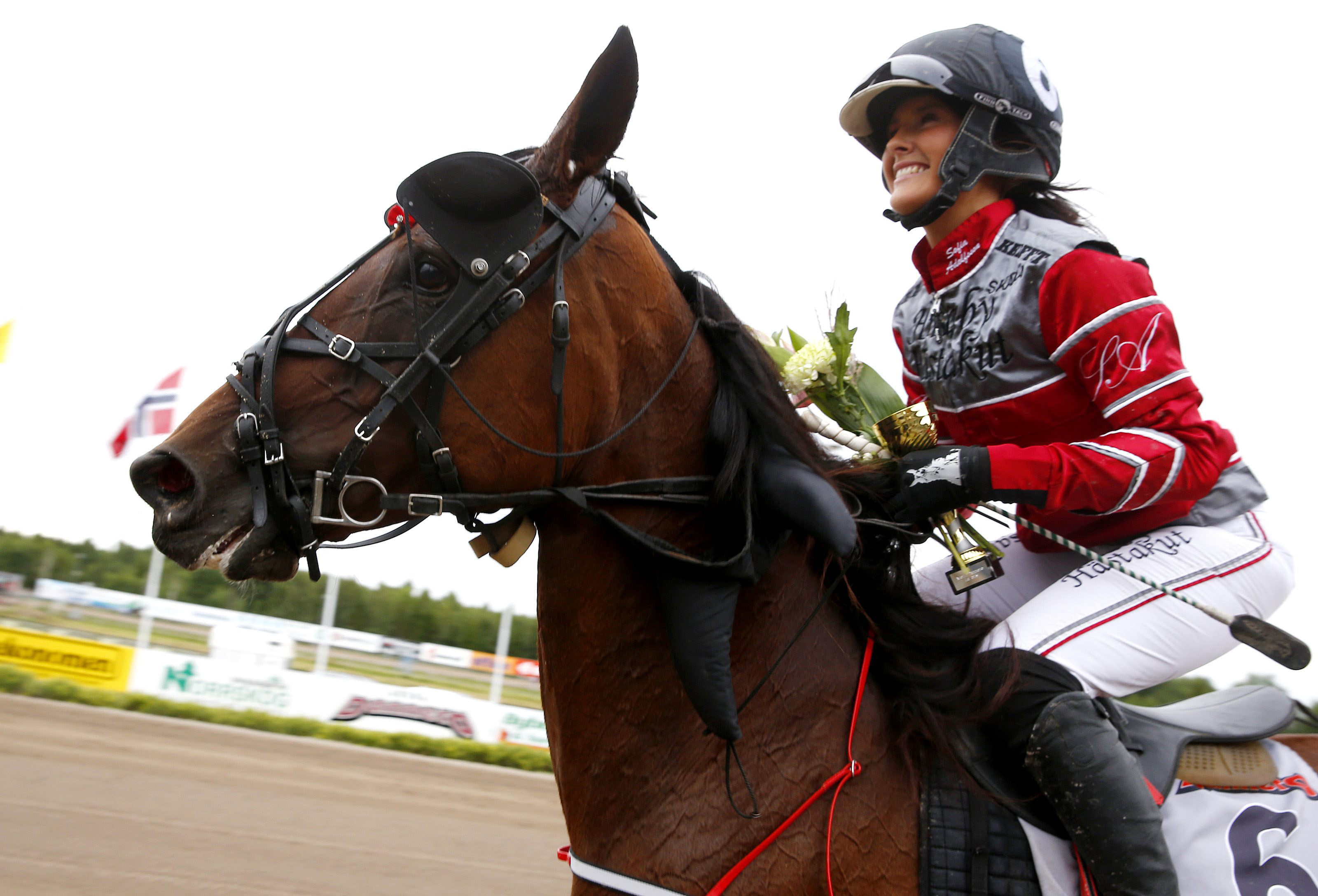 V75®: Sofia has made her choice

Sofia Adolfsson would love to go to France to race.
But on Saturday it's Monté-SM at Åby and for the first time this race is on V75®.
The country's dominant monté jockey is pleased with the choice she made.
"I'm happy to be riding Candor Hall on Saturday".

Late fall means it's time for SM (Swedish Championships) and this Saturday Åby is hosting three SM events on the V75® card.
The open SM will go as V75-6 where Prix d'Amerique hopeful Readly Express will be the huge favorite.
New for this year is that Monté-SM will be included in V75 for the first time and so too the reigning champion in a starring role.
26 year old Sofia Adolfsson was last year's champion, her first time. This year she's ahead by "a mile" wth 43 wins in 178 starts. There's a big gap down to second, who is Emilia Leo with 19 wins.
"I also have a win in Norway and one as a driver" says the Örebro native who besides racing is helping out with training in a couple stables, has her own horses with her family and also works part time as a nurse.

Adolfsson impressed
Nantucket is the horse she took hr biggest win with and has praised the most in her career. But when the draw was done, Sofia didn't pick the best monté horse in the country - she had picked another horse.
Two weeks ago Candor Hall won impressively in his first start under saddle. Sofia Adolfsson was very impressed.
"I picked on form pretty much. Candor Hall raced huge in Karlstad and I feel that i have one of the better horses in the field. SM is the biggest race in Sweden for these monté horses, but also for us jockeys. I'm happy to be riding Candor Hall on Saturday."

Tough decision
Sofia Adolfsson thinks she picked the right horse, but she's far from positive. Mercedes Balogh trains Nantucket and Björn Goop trains Candor Hall.
"Björn has been nice enough to put me down on his horses all year and that's of course a relation I'm very happy about. Nantucket on the other hand is such a nice horse and I'm thankful for everything he's given me. I really felt it in my heart, when I couldn't ride him,"

A really good race
Monté-SM will go as V75-2. Adolfsson picks herself to win in the papers followed by El Mago Pellini, Nantucket and Art On Line.
"Kolgjini's El Mago Pellini seems like a very strong and tough horse and although I haven't seen his monté starts in France, I think he will be a tough opponent. It's a really good race with a few horses who can win if it goes their way. It's great that monté can be on V75 and this race won't embarrass the sport".
Sofia Adolfsson has said that her dream is to race in the home of monté - France. Maybe  Björn Goop trained Candor Hall can be her ticket to France.
"I don't know the horses down there at all but judging from his last start I think he'd be a handful for them. If Björn would give me that chance...nobody would be happier than me".

Five voices about Sofia Adolfsson:
Björn Goop (trainer Candor Hall):
"She is very good at both riding and driving. She doesn't over use the horse and she's very calm and collected. She gest along with the horse. She's ridden difficult horses for me and done it very well".
Nathalie Blom (rider of Raggamuffin in SM):
"She's a very tactical and calm rider. The fact that she's so tactical makes her a very tough opponent, It will be a rough race on Saturday, with no given favorit".
Mercedes Balogh (trainer of Nantucket):
"She never makes a rushed decision and she always trusts her horse. She can get a horse going without being hard on them. She has something special and I'm sure she will be able to compete internationally too".
Stina Swartling (responsable for monté at Svensk Travsport):
"Sofia is very good, mostly because she rides a very tactical race. She's got the ability to get everything out of the horse because of that. She's also in great shape and doesn't bother the horse, even if he's difficult".
Torbjörn Simberg (trains Made AveMaria, Sofia's most recent winner):
"She's incredible. She makes no mistakes. She's a good tactical rider and she follows the instructions very well. She rides so well, the horse won't know she's there and she always gets herself in a good position. She's also very easy to get along. All positives".