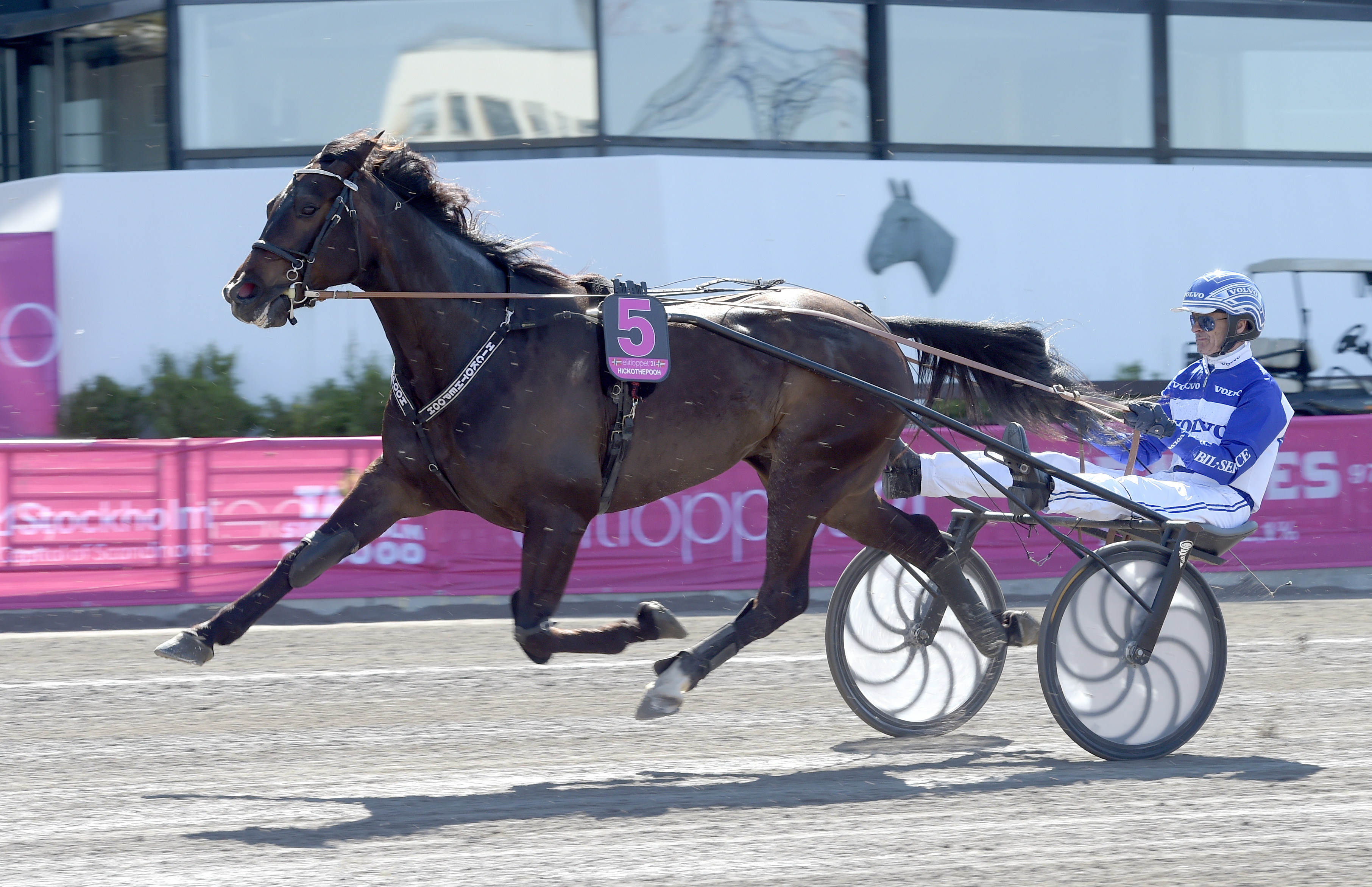 Last year's most improved horse in Norway is back.
The Elitlopp contender Hickothepooh is ready to follow up his break through season as a nine-year-old.
On Saturday the time has come for this year's first big race, Klosterskogen Grand Prix.
"Based on ability alone there is no doubt he's the best horse in the field" says trainer Kristian Malmin.

Klosterskogen Travbane in Norway is the racetrack that comes to life during Easter.
On Saturday, several of the country's top trotters make the trip to the 800-meter track with the sharp turns and ATG's customers are invited to bet on their V75® card.
There are many goodies in the Easter buffet.
In Thai Tanics Æresløp (V75-1) we will get to see the contender from both Prix d'Amerique and Elitloppet Moni Viking in his seasonal debut in a long distance race with his former trainer Björn Goop in the sulky.
Habibs Minnesløp (V75-3) is open for four and five-year-olds and it will be a duel between last year's three-year-old champion I.D. Exceptional, who won the Norwegian Kriterium and last year's four-year-old champion Kraesj, who won last year's Derby in Norway.
And the coldblood champion Odd Herakles will take on the forever young 15-year-old queen Ulsrud Tea in Moe Odens Æresløp (V75-5).
On top of that, Klosterskogen Grand Prix for the older elite goes as V75-7 and it is hard to complain about the race card that Klosterskogen offers.
Notice that the track has a passing lane down the stretch.

"Will race barefoot"
Someone who comes to Klosterskogen in an urgent matter is Kristian Malmin, who has done very well since taking over the stable after his long time employer Trond Andersen who passed away last August, due to cancer.
The stable who was among the top stables in Norway for many years holds its position also with Kristian Malmin as the head trainer and currently sits in second place behind Frode Hamre in Norway.
Malmin starts two of his best horses to Klosterskogen Grand Prix on Saturday.
Hickothepooh got a smashing breakthrough last year as a nine-year-old when he as a big upset won Finlandia-Ajo and got invited to Elitloppet.
He then went on to win Ulf Thoresen International at home and at both those wins the horse got to race barefoot, something he has very rarely been able to do before.
He returned to the races two weeks ago after having been off for six months and he didn't show the same kick in his step with shoes on his feet.
But that doesn't bother the trainer at all.
"Hickothepooh is never good in the first start of the year" Malmin says to Evreysport and adds:
"He wasn't bad at Bjerke but he lacked the speed and the kick in his stride to be able to advance three-wide when the tempo was so high. He has looked very good in training after that and that start did him good".
This time the shoes come off which turns the decent closer into a world class trotter.
"Most likely he will race barefoot this time. It's a big advantage for him. Tactics are up to Vidar (Hop), but the horse can leave and I don't hink the turns will bother him. He is the one out of my horses who should have the best chance. Based on ability alone, there is no doubt that he is the best horse in the field, he showed that time after time last year" says Malmin to Everysport.

Will get a nice trip
In the same race, Malmin also has Miracle Tile.
She won the European Championships for mares at Solvalla last summer and made SEK 1 million.
This is her seasonal debut with the trainer himself in the sulky.
"She has trained well this past winter and I trained her at Bjerke at 1:16-speed over 2,100 meters.  She did that easily, so she is ready to start racing. She drew a good post position but it also means she needs a bit of luck. I have to give her a nice trip and hope for some racing luck. She is a very fast closer and she has a very good gait, so the small track should be no problem for her. I won't be very surprised if she ends up battling for the win" says Kristian Malmin.

Here is what Kristian Malmin says about his other starters to Everysport:
"10 Delight Classic (V75-1) had no luck last time and we can just forget that start. When the tempo was low I gave up and chose to stay to the inside. She never got out and crossed the wire with plenty left in her tank. I don't expect her to have any chance against a horse like 13 Moni Viking, but she can beat the rest. She is strong, good gaited and in good form".
"7 Stensvik Martin (V75-5) seems to be in very good form, so a good effort and a top five finish seems to be within reach".
"4 Sophia Frecel (V75-6) was very good last time out and won easily. I have a feeling that volt start might be a problem for her, but if she steps out of there trotting, it's interesting to be at the starting distance like that at Klosterskogen. A pocket trip with the passing lane could be perfect, but she is only one of many if you play with a few horses in that race".