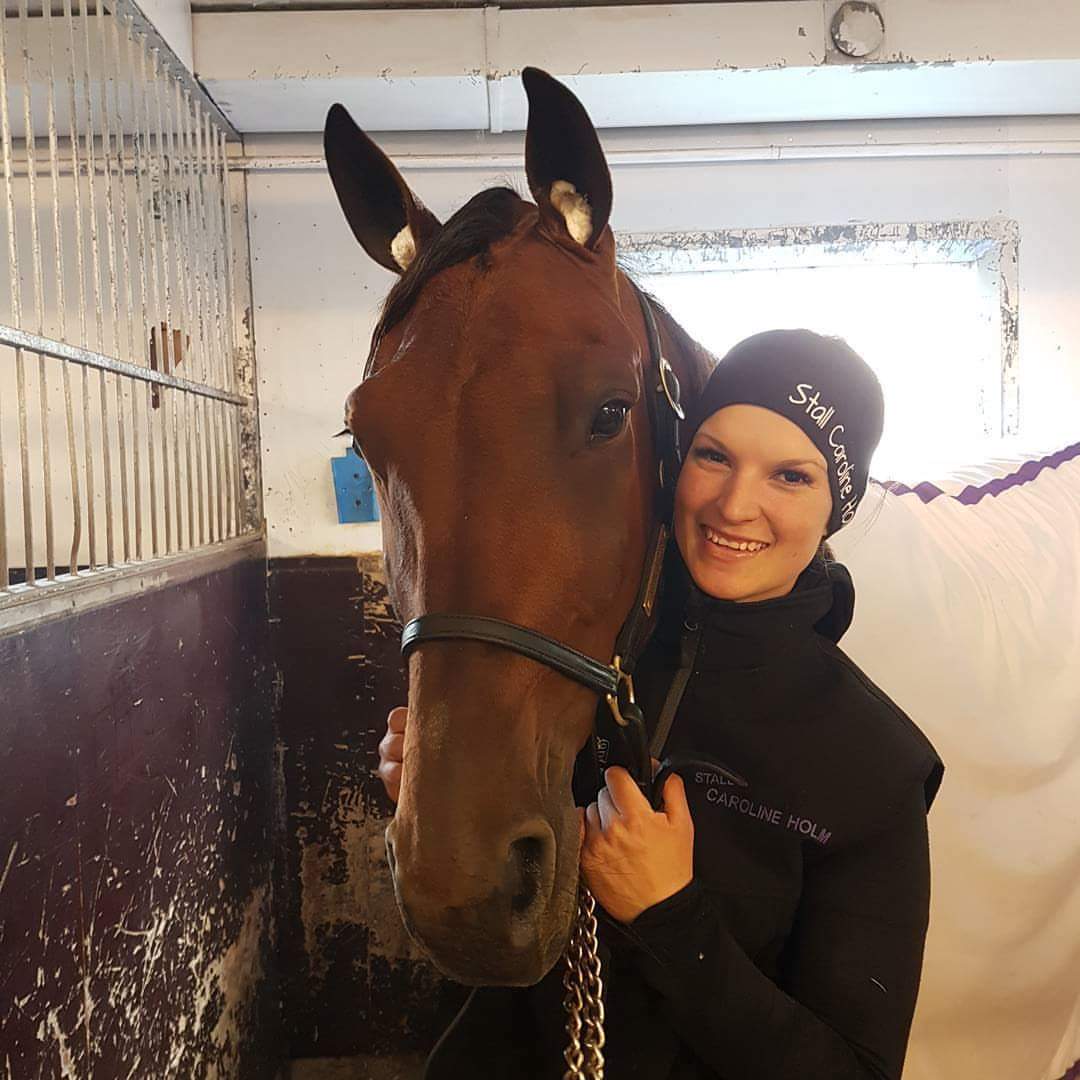 She is one of Sweden's most popular trainers who always has a waiting list.
Despite that, very few V75® bettors have heard the name Caroline Holm.
This Saturday she can change that.
"This is huge for me, I will be nervous the entire week" says the trainer who is racing two horses when Bergsåker is holding it's V75 card with a jackport and SEK 30 million for a lone winner.

During her four years as a professional trainer, Caroline has trained more great horses than most colleagues will come in touch with in a lifetime.
Balfour, Beau Mec, Coldtown, Ed You, Jeppas Maxi, Perfectly Enough, Putte Topline and Sauron Pil are a few of all the horses who have come to her little stable in Hudiksvall.
And to the nearby swimming pool.
That's what has given Caroline her reputation in this business.
As a neighbour to her former boss Jan-Olov Persson, she has full access to his swimming pool.
Something she really took to heart and became an expert at.
"It all started when Robert Bergh wanted to send two horses to Jan-Olov when I just started out as a trainer. Jan-Olov then asked me if I could take them instead. Ever since then I have continued renting the pool and built my business around it. It's not easy getting horses as a fresh trainer and you need a star or stand out in another way. For me, the pool has really helped me and I'm very thankful for it" says Caroline Holm.

Nimbus C.D. - a good swimmer
As of today she has 29 horses on her list. Among them are former Kriterium winner Chelsea Boko and three time millionaire Nimbus C.D.
Like the horses named earlier they have also come to Caroline to swim as a part of their rehabilitation following injuries.
"This is pure swimming, which makes it quite unique. It's sometimes the only way of keeping a horse a with fracture going. We also get a lot of horses with tendon or suspensory injuries or even horses who just need to do something different for a while. Some can only swim for a minute when they first start. Usually it takes a horses two to three months to come up to the top level".
What does the top level mean?
"It means five intervals, each for five minutes. So a 30 minute training session. It takes a lot of them to get there but when they can do that. then I know I've built a solid foundation for future training.
What's the status on Chelsea Boo and Nimbus C.D.?
"Chelsea has been here for two months and is doing well. He's almost ready to go back. Nimbus is a good swimmer but has only been here for three weeks. Since he had a suspensory injury, he needs to walk a lot and put weight on it again in order to get his leg strong again. So it will take some time, but it's all according to plan so far.

Not ready for more yet
But they don't all leave Caroline Holm when they are done with the swimming part of it.
Her two race horses this Saturday are two examples of that. For time V75® winner Ready for More (V75-5) is making his second start since the summer of 2016.
His comeback ended with second place from the lead as the odds on favorite.
"He also had a suspensory injury and as a thanks for getting him healthy, I got to keep him until he was qualified and after that he stayed. I'm not sure what his future looks like but I'm very thankful for every start I get to do with him. Even though I love working with young horses and do rehab, it's fun having race horses and be able to go and show the work you've done'.
"Unfortunately I haven't been able to prepare him the way I wanted to, due to all the rain we got here the past month. With that type of injury he's had, I definitely wouldn't take any chances and train on a bad track so we took his comeback race as a stepping stone and i was pleased with him. He had every tight to be a little tired in the end".
Does he feel like a real good horse when you train him?
"I can't say he does. He just likes to look around at things and isn't very focused. Same thing after the race, even though I can tell he is in better shape now".
So much better, that he's ready to win?
"No, I can't imagine that. Especially considering the distance and post position. There aren't a lot of races in the class he's in so I had to try him in V75. Everyone has high expectations on him, since he was a very good horse. But considering his injury, I don't think you can expect him to be ready to win in V75 already now. He will ned a few more races to get in shape, but it will also be very interesting to see how he does in here".
Does that mean you'll tell Ulf Eriksson to not be aggressive?
"I never talk tactics with the drivers. Maybe he feels great and he will be a little more aggressive. But I won't be disappointed if he doesn't hit the board.

"Very quick behind the gate"
The other race horse from the stable is Lukas Bris (V75-7) who had been away from the races for three years when he came to Caroline Holm last year. In his last start he came very close to getting his and his trainer's first V75 victory.
"That was a lot of fun. When he got out I thought he could get there. But I was very pleased with his second place.
Did you always think he was a horse for V75?
"Absolutely not. He's had a lot of bad luck in the past but this year he's been able to race and I was pleased when he was trotting 1:15 in the spring and then boom he's trotting 1:11. It's great.
He was scratched after his last start. Is that something that could bring his form down?
"I don't think so. He just had a little fever. He's been swimming and training as usual".
What do you think of his chances Saturday?
"I have a good feeling since he's been so good lately. He loves to race and it doesn't seem to matter what kind of trip he gets".
What kind of trip do you think he'll get?
"He's very quick behind the gate, so I think he'll get a good trip despite the post position. I don't need him on the front, I'd rather see him get a stalking trip like last time".
This is the first time you have two horses racing on V75. How does that feel?
"This is huge for me. I will be nervous the entire week. I was nervous already when I entered them".
How would a win feel for you?
"It would be the biggest win in my career, no doubt. We raced Järvsö Irene in three big finals, but winning V75 would beat that".
Are you planning any equipment changes that might increase your chances?
"Ready For More raced in a regular sulky last time but this time behind the gate he will get my Custom American style race bike. I think he'll like that one. Lukas Bris raced in it for the first time in his last start and will do so again. No other changes".
Who has the best chance?
"Lukas Bris".
________________________________________