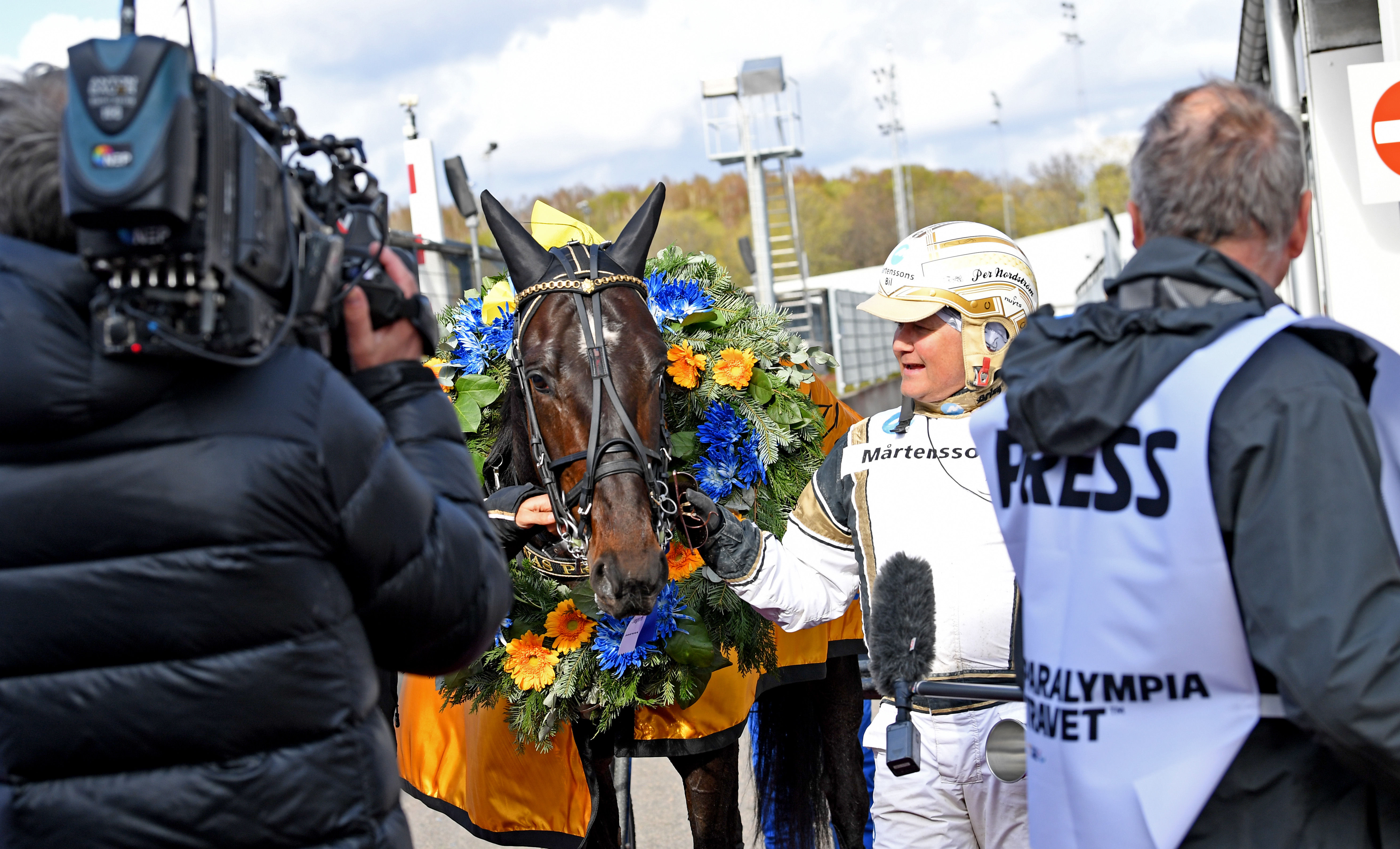 Maybe a horse for Elitloppet next year.
On Saturday Önas prince has a tough task ahead from a bad post position in the four-year-old race Ina Scots Ära.
"I won't take this one off the gate. I'm going to make a serious try when the gates open - this is the best horse I have trained" says Per Nordström.

Mantorp takes over as host for V75® after Solvalla's big weekend with Elitloppet.
Ina Scots Ära (V75-6) is a field full of good four-year-olds racing for the first prize of SEK 250,000.
Önas Prince comes off a win in the King's Trophy at Åby where Per Nordström's star trotter almost got beat on the front end by Rome Pays Off.
Robert Bergh's horse came very close to nipping the favorite at the wire after coming up the passing lane. The photo showed that Önas Prince kept his nose in front after he got to set his own fractions on the front end.
"It came down to a speed duel the last 400 meters where we left the others behind us and Robert's horse was darn good. It was a close call but Önas Prince could have kept going that speed for another 500 meters and he wasn't tired" says Nordström.
This year the four-year-old has piled up four wins in as many starts. Counting the win at his home track Jägersro from December last year, he now has five straight wins.
Önas Prince was sick in the Swedish Trotting Kriterium last fall and was a bit short in the start following. Without those two blobs, he would have had nine straight wins.
Per Nordstöm has trained many good horses throughout the years and he has been close to saying it a couple of times...during this interview he does.
"This is the best horse I have trained. Period. I haven't wanted to brag about him too much but I think most people will agree with me. Önas Prince is a top-top-top horse".

Aiming for the Sprint Championship
Önas Prince is being aimed at the Sprint Championship in Halmstad with eliminations and final Thursday, July 8. The hope is also to race in the Swedish Trotting Derby in the fall.
He is a very versatile horse who is good on most distances. A horse with 'a gas and a brake' who trainer Nordström can rate just the way he wants in a race.
Önas Prince reminds Nordström about Nimbus C.D. he says.
"Yes, that incredible explosiveness behind the gate! It's such an advantage when you fire them out of the gate and can slow them down the way you want. He is so calm and cool and he lets go of the bit right away and doesn't try to run off on me. You can leave in 1:02-speed and bring him right down to 1:25-speed or so. He is very rateable and intelligent" says the trainer.
Some said your horse could have raced in Elitloppet this past weekend?
"It was 'Tarzan' Melander who mentioned Elitloppet this year. Önas Prince had no business being there and I never thought he would either. But next year we will think long and hard about trying to aim him towards Solvalla. Maybe we can get invited if we decide to go for it and everything feels good".
What are your thoughts on the start this Saturday?
"It turned out to be a good race with some 'unnecessarily' good horses. But of course, I think he can win despite post position eight. This start comes at the right time for the Sprint Championship. There's another long-term plan for making the trip to Mantorp too — there's a Breeders Crown leg there on August 2. One of the reasons that I race him there this weekend is so that he will get to try the track and feel comfortable next time he comes there. Those things are very important".
Önas Prince is known to be very quick out of the gate. What is your plan from post position eight?
"To take him off the gate and sit last is to give up the race. I have a very quick horse so I will sure as heck put the pedal to the metal in the start - there is no other option. Then we will see if we can make it to the lead or not. I am very pleased with my horse".
Any equipment changes?
"I hope to race him in an American sulky for the very first time. It's a test going into the Sprint Championship, to make sure everything works out the way I think it will. He has a lot of foot so he will race barefoot all around again" says Per Nordström.