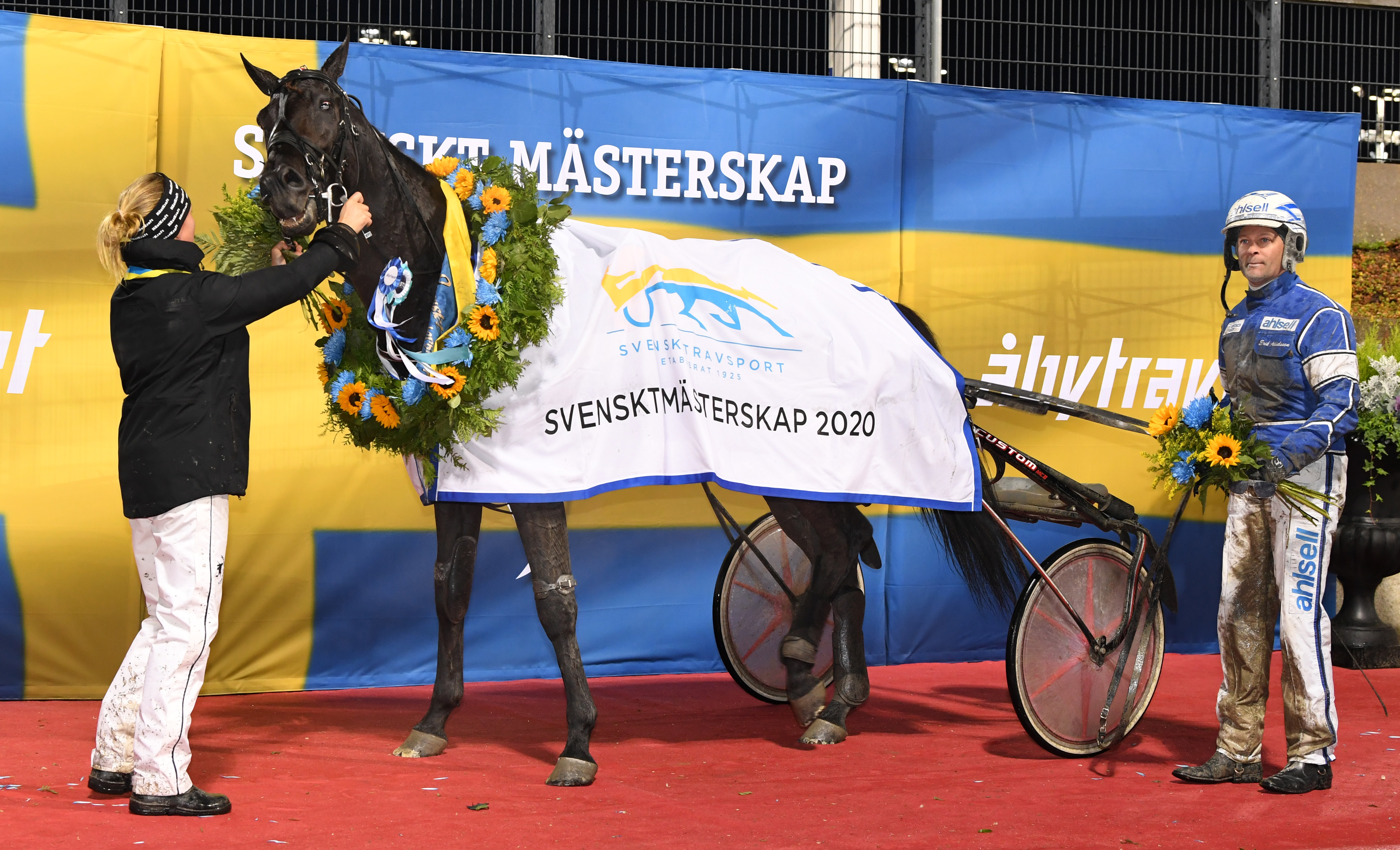 He won the Swedish Championships in a new world record time and in his last start he won the gold division.
The scatterbrained Very Kronos has finally gotten his act together and is looking for another victory in Silverhästen on Saturday.
But trainer Svante Båth doesn't want to get too high on him.
"I think it will be very tough for him" says the trainer.

He has stayed flat in four starts in a row.
Very Kronos seems to finally have found the harmony that makes him develop into the elite trotter everyone always thought he would be.
His breakthrough came in the Swedish Championships when he bombed away on the front end to win in a new world record time over the long distance.
In the start after he finished second after having been parked outside Cyber Lane and in his last start he won in the gold division, again on the front end.
This time the tactics will be different since he drew in the second tier, which means trainer Svante Båth isn't as optimistic regarding his chances in King Carl XIV Gustaf's Silver horse (V75-6).
"He was very good in his last start and he has been good for a long time now and I hope he can continue like that and continue to stay in the races, most of all".
What are your thoughts on the task ahead?
"It will be very tough. We couldn't beat Cyber Lane on the outside two starts ago and we have to keep our fingers crossed that they get into a fight over the lead, that would help us. If they don't and Johan (Untersteiner) gets to the lead, then I think it will be tough for us to win".
Shoes or no shoes this time?
"It's late fall. I have entered him barefoot but he might race with shoes, we'll see. I'm planning on racing him at Vincennes on December 19 and it's more important that his feet are good enough to race barefoot down there".
Does that weigh in on the tactics in this race on Saturday?
"No" says Svante Båth, who has three other starters on V75®.

Saved his feet for this start
Global Welcome is in the same race as Very Kronos, but he has an ever tougher post position.
"His chances were taken away by the draw and he would have needed a much better post position. We went all in with him last time he raced and left with him which made him hot. So maybe that's why he was pulling and didn't perform the way we hoped. The conditions are different now and I'm happy if he can get a check".
Mellby Hope starts from the first volt in this mares handicap which is a leg of Diamantstoet (V75-4), but there's a question mark regarding her as well.
"She was scratched two weeks ago when she hurt herself a little bit and got a minor wound. That's all healed now but she missed a couple of training days because of it. That's too bad since she had shown good form before that. She leaves quickly and can race from any position which is an advantage, but I doubt she can hold them all off".
Svante sounds more optmistic when we get to Gazoline Mearas (V75-7).
"We thought we got good cover last time but that horse turned out to be no good so he got dragged back through the field and that was that. He had raced well before that and he raced with shoes in his last start, just because we wanted to save his feet so that he could race barefoot now, which he will. There are a couple of very good horses in the race, so it's a bit of a longshot to think he will win, but if he races well he could end up top three. We have tried different forms of bridles and all I can say is that he will race with some sort of blinds as always".
Which one of your horses would you say has the best chance to win?
"I have to say Very Kronos" says Svante Båth.