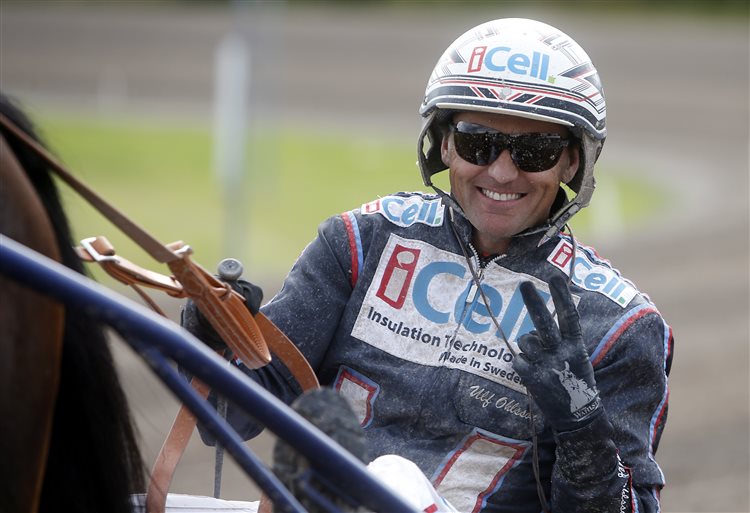 He was the most winning driver in Sweden last year with 322 wins.
He was also the driving champion at five different racetracks.
He is nominated for Driver of The Year at the Swedish trotting awards gala.
On Saturday Ulf Ohlsson drives in all of the seven V75 races.
"It looks exciting on paper" says the tireless catch driver.

In 2016 Ulf Ohlsson moved south and is now living in Knivsta, just north of Stockholm together with handicapper and ATG Live commentator Elin Gustavsson.
Before that he was based at Bergsåker in Sundsvall where he trained his own stable until 2011, when he decided to become a catch driver and he has been one of the best drivers in Sweden since then.
The five last years 2016-2020 he has been the most winning driver in Sweden. His record is from 2016 when he won 410 races.
"It could have been a few more since I went on vacation for two weeks and I was also suspended a couple of days that year" says Ulf, who last year won 322 races and surpassed 6,000 career wins.
He also became the driving champion at five different tracks: Boden, Bergsåker, Bollnäs, Rättvik and Mantorp.
"It was extra fun to win the title at Mantorp, that's the first time for me there. I've won most of my driving titles in the northern parts of Sweden before" says the 56 year old driver and adds:
"I won the title at ten different tracks one year. That's a record that will hard to beat".

"Fun with competition"
Not least because of the younger driviers coming up, making the competition tougher as they want to beat the older, more experienced top drivers.
"It's fun with competition. It means I have to stay sharp to keep my position".
What is your take on today's young trainers and drivers?
"There are many younger guys and girls who are coming up and who are doing very well. This sport needs new profiles to stay alive".
Ulf Ohlsson has kick-started 2021 and as we write this he has 23 wins in 104 starts.
"I usually start off the year slow, but it's gone very well and I have won on V75, the premier league of trotting. Those are the races you want to be seen in and win as a driver".
Do you have any specific goals for this year?
"No, as a catch driver it's hard to put up goals like that. I'm completely dependent on which horses I get to drive. But it would be nice to win one of the bigger races. I missed that last year even if I had the most wins in the country".
You are working pretty much every day of the year. What do you do if you get a day off?
"Then I'm home spending time with Elin. We eat something together and watch a movie. Sometimes it's nice to get a break from racing too".

Ulf evaluates his chances
Ulf has another busy day on Saturday as he drives in all seven V75 legs. Here are his thoughts:
"3 Donners AM (V75-1) is trained by Per Linderoth, who is a dear old friend that I've known for many years. He has a horse in good form and it will be the first time for me driving him. He drew a good post position and he looked great locked in last time he raced. He is one of many who can win this race".
"8 Love You Sweden (V75-2) is trained by Markus Pihlström whose horses are in good form. I won with her in Östersund in her last start, but unfortunately she drew in the second tier here and it feels like the horses starting 20 meters behind us will be right up my back right away. Winning will be tough, but she can get a good check with some racing luck".
"11 Bokli Rapp N.O. (V75-3) is trained by Daniel Redén who also is good at training coldbloods. I have driven him five times and we have four wins and one second place, so we get along well. He starts with a 20 meter handicap here over the long distance and a horse like 4 Tekno Jerven can be tough to make up those 20 meters on. My horse is very capable and he should go on the V75 ticket".
"2 Disco Volante (V75-4) is trained by Stefan Melander and we have a good relationship. Two starts ago he made a break in the start but he got his revenge in his last start at Bergsåker where he was very good after I sent him to the lead with a lap to go. He drew a perfect post position here and we are looking for the lead. He looks like my best chance on V75".
"4 Take It Easy Tour (V75-5) is trained by Björn Goop and I drive for him every now and then. I drove him three starts ago at Åby and he raced well that time from a difficult post position. I don't really know how he has raced in his last two starts. He drew a good post position behind the gate but it's hard for me to estimate his chances here".
"3 Grevin Sisu (V75-6) is trained by Petri Salmela who I have worked together with for many years. I won with him in his last start at Solvalla and he was very good then. This time it's volt start unfortunately and he hasn't started with volt start since he was two years old, since he's a bit tricky. He drew post position three which is good and if he stays flat he could be the dark horse here".
"2 Marschall Match (V75-7) is trained by Jonna Irri which is a new name for many. She is Finnish and she has her Swedish stable at Julmyra. First time I drove him we got locked in but after that I won with him on the front end twice in a row. This time it's a three kilomter race but he drew well and I think should have a decent chance to win again".