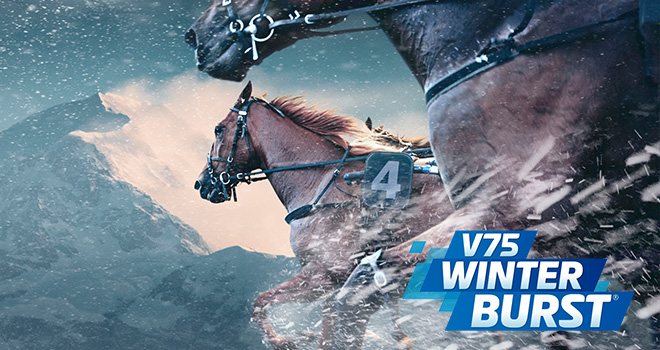 ​The weeks of Christmas and New Years Eve have the last five years been synonymous with V75 Winter Burst®.
Starting on Wednesday, December 23 and finishing on Thursday, December 31 there will be eight V75 cards in nine days with a big multi jackpot on New Years Eve.
"Winter Burst has become a tradition this week which is much appreciated by our customers" says Nicklas Jonsson, Head of Horse Betting at ATG®.

V75® is the betting the form that generates the most payouts over SEK 1 million each year. So far this year, there has been 280 payouts over SEK 1 million only in Sweden to the V75 bettors, which by a huge margin beats last year's record of 185 payouts over SEK 1 million.
Chances are high that the number will increase further during the eight V75 cards, all broadcasted on national TV in Sweden, that remain before the year is over.
The biggest pool is the one on New Years Eve. That's when all the money that has been accumulated since September 26 will be paid out. ATG are right now estimating that number to be SEK 70 million in the pool for all seven winners picked on New Years Eve. It could be even more, since all the jackpot money during V75 Winter Burst is being transfered over to the multi jackpot card on New Years Eve.
Maybe the all time high payout on V75, over SEK 67 million, could even be surpassed. The ten year old record was beat just at Axevalla - the very same track that arranges V75 on New Years Eve for the third consecutive year.
"It would obviously be fantastic with a new all time high payout, but we are just as happy paying out millions to many happy winners" says Nicklas Jonsson.
The first racetrack to host a V75 Winter Burst card is Mantorp, who on Wednesday will arrange the traditional 'sitting-up evening' as the night of December 23 is called in Sweden.

We have partners that offer our games across 4 continents, find your local partner.
Bet Now