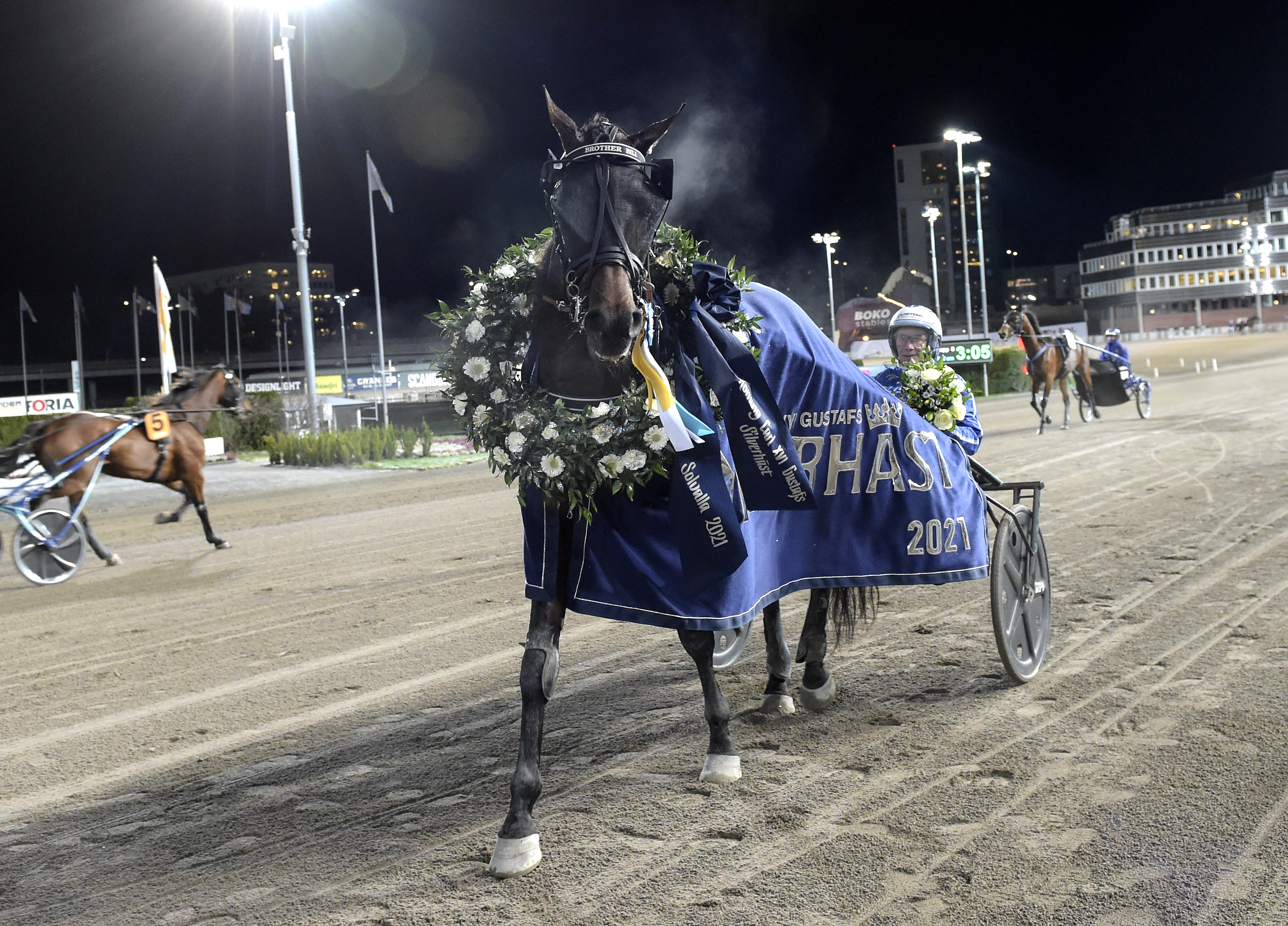 V86®: Brother Bill in his seasonal debut – "Feels even betten than last year"

Brother Bill closed out last year by winning three in a row and beating the elite in the Gold division.
The star trotter is now ready for his seasonal debut and it sounds very good from trainer Timo Nurmos.
"My horse feels better now compared to when he made his seasonal debut last year. I think he belongs in Elitloppet, but he has to prove it on the track too" says Nurmos.

This Wednesday's V86® ends with a very good race at Solvalla. The Onion's race over the sprint distance has attracted several possible Elitlopp candidates. One of them is Brother Bill who had a strong fall season and impressed in three straight wins. He closed out the year by winning both a leg and the final of the Gold division, where the latter also was Silverhästen at Solvalla. He sprinted past horses like Milliondollarrhyme, Gareth Boko, Milligan's School and others. When he won the leg at Eskilstuna in the start prior to the final, he left hard before the race was called off and he was pulled up after 500 meters. When the race went off again shortly after, he was the strongest one down the stretch and managed to win.
"1 Brother Bill (V86-8) had a strong five-year-old campaign and took further steps in his development. I raced him in easier races early in the season and he developed into an elite trotter" says Nurmos.

"Trots with his tail up – he is just loving life"
How has the winter training been and how does he feel now before his seasonal debut?
"He has trained very well this past winter. A lot of heavy training in the uphill and a few times on the track. I usually don't train that fast there, most horses go around 1:21-1:22 in the jogcart. I trained Brother Bill to the sulky together with Hachiko de Veluwe in 1:17.5".
"I am very pleased and I can feel that he is race ready now. Of course, he is not in top form already now and he is not supposed to. But when they feel like he does, that is usally good enough. He shows that he in coming into form. Like with Marion Fouty Bon last week, before she made her seasonal debut. The horses are happy and full of energy and they trot around with their tails up in the air and just loving life"
"I think he feels better in may ways compared to when he made his first start last year. Then he almost sprinted past Don Fanucci Zet when he made a break right before the finish line when the driver pressured him too much".
Has Brother Bill changed compared to last year and previous years?
"He has gotten a year older and has matured more body-wise as a six-year-old. It's usually hard for a five-year-old to step right into the older elite, but like I said he took another couple of steps in his development. When he won his last three starts, he beat several Elitlopp contenders" says Nurmos.

"He can race with any trip on any distance"
Brother Bill will be the favorite in the last leg of V86. The six time millionaire (SEK) starts from post position one with Jorma Kontio in the sulky and trainer Nurmos is optimistic.
"The post is good and he can leave fast. It might not be enough to hold up the lead, but he is guaranteed a good trip. It's a big difference compared to last year's seasonal debut when he had post eight behind the gate and got away last".
"My horse is very strong and he can race with any trip on any distance. He won first up last year against very good horses. He will race barefoot all around, with a pull-down bridle and in an American sulky just like before. He faces horses already in race shape but I am very happy with my horse".
What are your thought of a possible Elitlopp with Brother Bill?
"I think he belongs in Elitloppet, and not just to help fill the race. He has all the right qualities but he has to prove it on the track too. We will make this start first and then we will see" says Timo Nurmos.

"Blinkers back on now and first time pullouts"
You have one more starter on V86, Bakerman who will also be the favorite in the fourth leg. He recently made his first start of the year and finished third. What is his status?
"2 Bakerman (V86-4) raced OK in his last start but he gets very lazy in the open bridle. I played it safe since it was his first start of the year and volt start and I wanted to make sure he stayed flat and got a start in his legs. He usually races with blinkers. This time he will start behind the gate which is much better for him. He will get the blinkers back on and that will make a big difference, plus he will be much improved with that start in his legs. We also tried pullouts in training last week which had a very good effect on him. Most likely he will race with them this time. He will race barefoot behind and in a regular style sulky, just like in his last start" says the Solvalla licensed trainer.