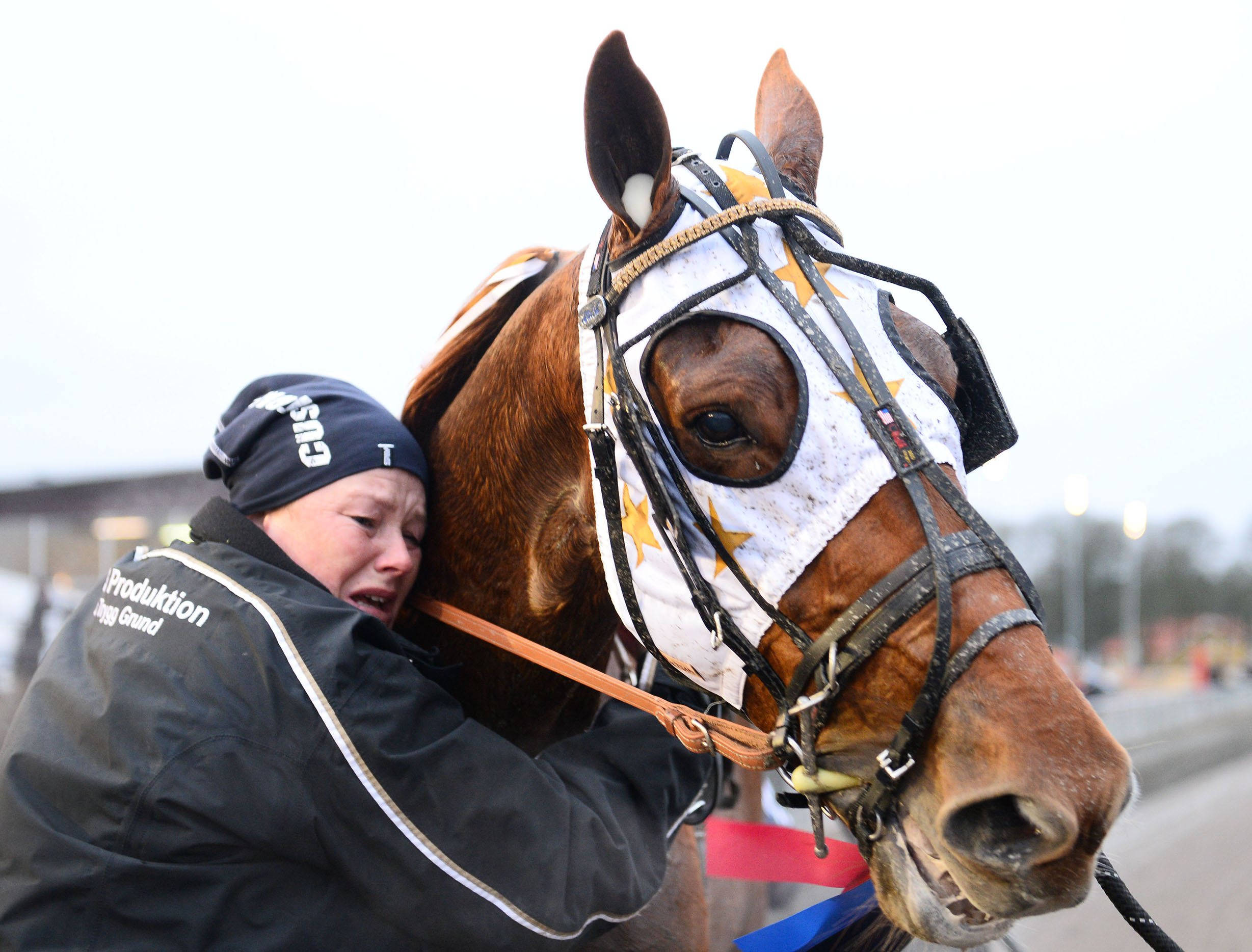 Their results are almost identical.
Their characteristics diametrically opposed.
On Wednesday stablemates Fonda Boko and Swimming Pool will make their first starts on 2018 in V86®.
“It will be really exciting. The horses feel very nice and are a little more prepared for this than usual”, says trainer Ulrika Wällstedt.

They have the same number of starts (39) and the same number of wins (10).
But when they step onto the racetrack they have nothing in common.
Fonda Boko is quick like the wind and often goes straight to the front, usually wins when he's on his game, but often makes breaks.
Swimming Pool is the tank, who usually gets away among the last, has a hard time switching gears, almost never gets tired and loves a sloppy track.
In Ulrika Wällstedt's 23 horse racing stable, these two geldings are the first ones to race in 2018.
"The horses came down in form a little late fall and Swimming Pool also suffered from bad blood counts. That's when we decided to give the entire stable a break. Now we're on our way back again, it will be really exciting on Wednesday" says Wällstedt who took both her horses to Solvalla last week for a workout.
"We've had bad training conditions lately so we've been going to Solvalla every now and then. The plan was if both horses felt good we'd enter them and they did, both felt very good".
Did they train together?
"No they went by themselves. Swimming Pool trained 1:18/1,600 meters with 1:12 last 500 meters and Fonda Boko 1:17.5/1,600 meters with an even faster last 500 meters. They also trotted full speed around the turn following the finish line so it was a good workout. We got the answers we wanted".
How close to top form would you ay they are?
"Of course they are missing the race speed, but they feel good and they're a little more prepared now than usual after a break. If they normally would have 75% form they might be at 85% now".

"Have the bounce back in his step"
Most bet of these two on Wednesday will be Fonda Boko, who seems to have fitting conditions in V86®-4.
"Yes, that's best possible post position for him out there. He's very quick from the start and volt start has never been a problem. It's in to the first turn her gets nervous and can make a break".
As a matter of fact, Fonda Boko has made breaks in over half of his starts, 21 times to be exact.
"It's all in his head and there's nothing we can do about it as far as equipment goes, it's all about himself. Many of his breaks have been in tight spots when he gets a little anxious, especially when horses are coming at him from the outside. That way it's better for him to be the one coming from the outside this time. But most important for him is that he's in harmony and right now he seems to be in good harmony in training".
How do you look at tactics and his chances to win?
"Even if he's won many races on the front, I personally think he races just as well from behind. But consider his post position and the distance, he'll race on the front of gets there. He was a little dull in the fall but he got the bounce back in his step and his attitude seems better now so he's no doubt the one with the better chance out of the two".
Sloppy track increases his chances
Against Swimming Pool we have the fact that he's never been able to hit the board following a similar layoff before and that he has post eight behind the gate in V86-8.
For Swimming Pool is the fact that he loves winter racing, seven of his wins are taken during the winter.
"It's because he doesn't care about track condition. He goes on whatever. When he won V75® at Axevalla the track was barely acceptable to race on, but we cheered as we saw the track since we know it would increase hos chances a lot. It looks like a few degrees above freezing on Wednesday so we'll what type of track Solvalla has to offer..."
So you're hoping for a sloppy track?
"You don't hope for it, it's never fun racing under bad conditions. But it would increase hos chances since a sloppy track hurts him less than many of his opponents".
But he doesn't seen to be a horse that wins off a layoff?
"Maybe not, but he feels very good. He's stronger and he trots with his head between his knees like he does when he's feeling good. Torbjörn Jansson said that he never felt him better just before he got sick last fall and it's the same feeling in training now".
Can you compare his form today with the form he had when winning V75 at Axevalla last year?
"Then he was in real good form so I don't expect him to be as sharp on Wednesday".
Any changes in shoeing or equipment on either of your horses?
"Yes, Swimming Pool will race with pullout earplugs for the first time. We tried it in training at Solvalla and it worked out well so it's time to try it in a race now. Other than that, no changes on either one".
They are two very different horses, where would you say the breaking point is as far as distance if they would race each other?
"Swimming Pool would win on distances 2,640 meters and up. 2,140 meters and under would go to Fonda Boko, so somewhere in between there" says Ulrika Wällstedt.