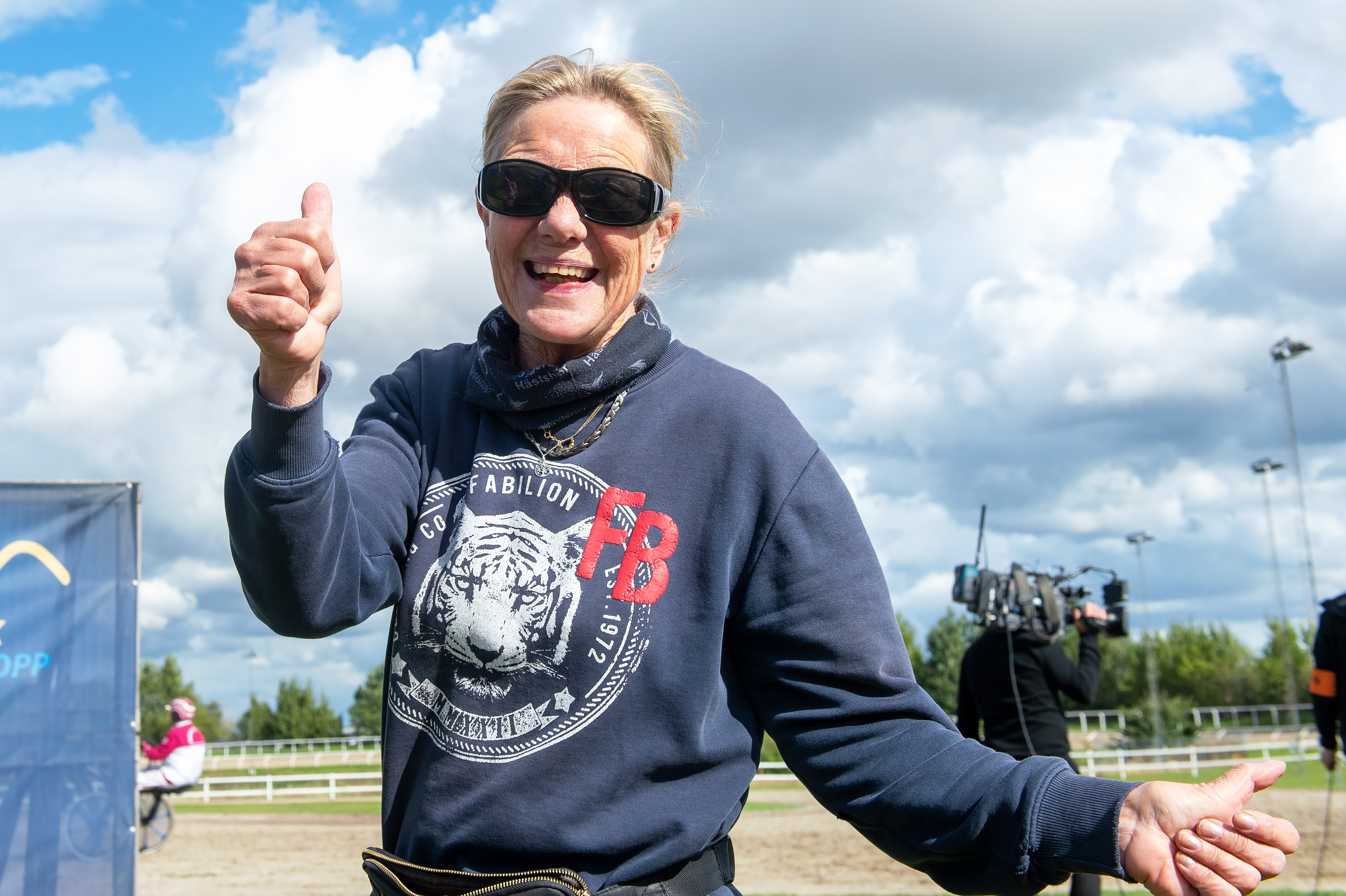 The lead is usually hers when she starts from the first tier behind the gate.
With her big gate Valeria Wareco should leave fast behind the gate in the mares race at Jägersro on V86 on Wednesday.
"She's very fast and racing in the lead is her thing" says the Jägersro licensed amateur trainer Monica Sahlgren-Fromell.

Solvalla is co-hosting this Wednesday's V86 together with Jägersro, a V86 card that has been enriched by a SEK 18 million jackpot.
Monica Sahlgren-Fromell makes the 30 minute trip to Jägersro with Valeria Wareco on Wednesday to race in V86-3, a race open for mares who have earned up to SEK 250,000 lifetime.
The mare has jumped it off in two of her last five starts.
"Both times she raced with volt start. On Wednesday she starts from post position two behind the gate. It couldn't be better! We really want to start in the first tier with her since she is so big, big gaited and fast behind the gate. She does her best work in the lead, so we're obviously looking to get there" says Monica Sahlgren-Fromell.
Monica has worked with horses her entire life and as of today she trains six horses at her farm in Skurup, southeast of Malmö.
Former professional trainer Fredrik Pedersen was employed in March of last year. Pedersen is driving Valeria Wareco on Wednesday.
They won a V86 race together at Jägersro as recently as December. That time Pedersen took over the lead short after start and was able to controll the field.
Valeria Wareco usually takes the lead without having to be asked.
"Yes, she doesn't have to put in much of an effort, she sort of just steps out of the gate and she is in the lead. No driver has ever asked her to leave faster than she does on her own, so we don't really know how fast she can leave. She's fast mostly because she has such a big gait" says the trainer.
In her last start she made a break shortly after the start and three starts ago she jumped it off in the start. Both those times it was volt start, which she doesn't like?
"Correct. But most of all she doesn't like to be behind horses, she wants to do 'her thing' and go first. It was extra unfortunate last time when she had to start from post position eight in volt start in the second tier, with a horse in front of her. When Peter Ingves drove her three starts ago she had to turn on a dime from post position four in the volt start and that just wasn't possible for such a big mare. We knew it would be a problem already when we saw the program".
In the track program she is picked first before 3 Excuse Me and 4 Miriam Håleryd. Any advice for the bettors?
"They should take her very seriosuly. At a quick glance I can see that the best horses also drew the best post positions. We want the lead and she always does well when racing there" says Monica Sahlgren-Fromell.
Two starts ago she raced well as she finished second in a V64 race after a tough beginning where she had to trot 1:09-speed the first 500 meters and a fast first kilometer as well. You must have been happy with that effort?
"Of course. Not with the way the race went, but with the way she fought to the finish line. She had to go long and hard before she got to the lead and then Ken Ecce came up and just kept going with his horse. I thought Valeria would stop completely at the top of the stretch - but she fought the entire stretch and only lost by half a lenght to a good horse (Lucky Truc)".
Last summer your horse Isco Boko won the three kilometer race Bo W Takter Tribute on V75 during Jägersro's Derby weekend. What is his status?
"He is in good form but he's a very sensitive horse. Not much has to go wrong for him to make a break. He is very capable but his head needs to be in it too. Valeria Wareco has a much better attitiude and of course we have to be optmistic about her chances on Wednesday".
You have had great success both as trainer and driver. When you were the most active as driver you won K.G. Bertmark Memorial with Johan Hedenberg's Sonnbo Dole and the actor and amateur trainer showed a lot of emotion. He unhooked the race bike and ran down the stretch with it in front of the big Derby crowd.
"I remember that. Ha ha! He doesn't have any race horses anymore but we keep in touch and we talk on the phone weekly, so he still follows the sport".