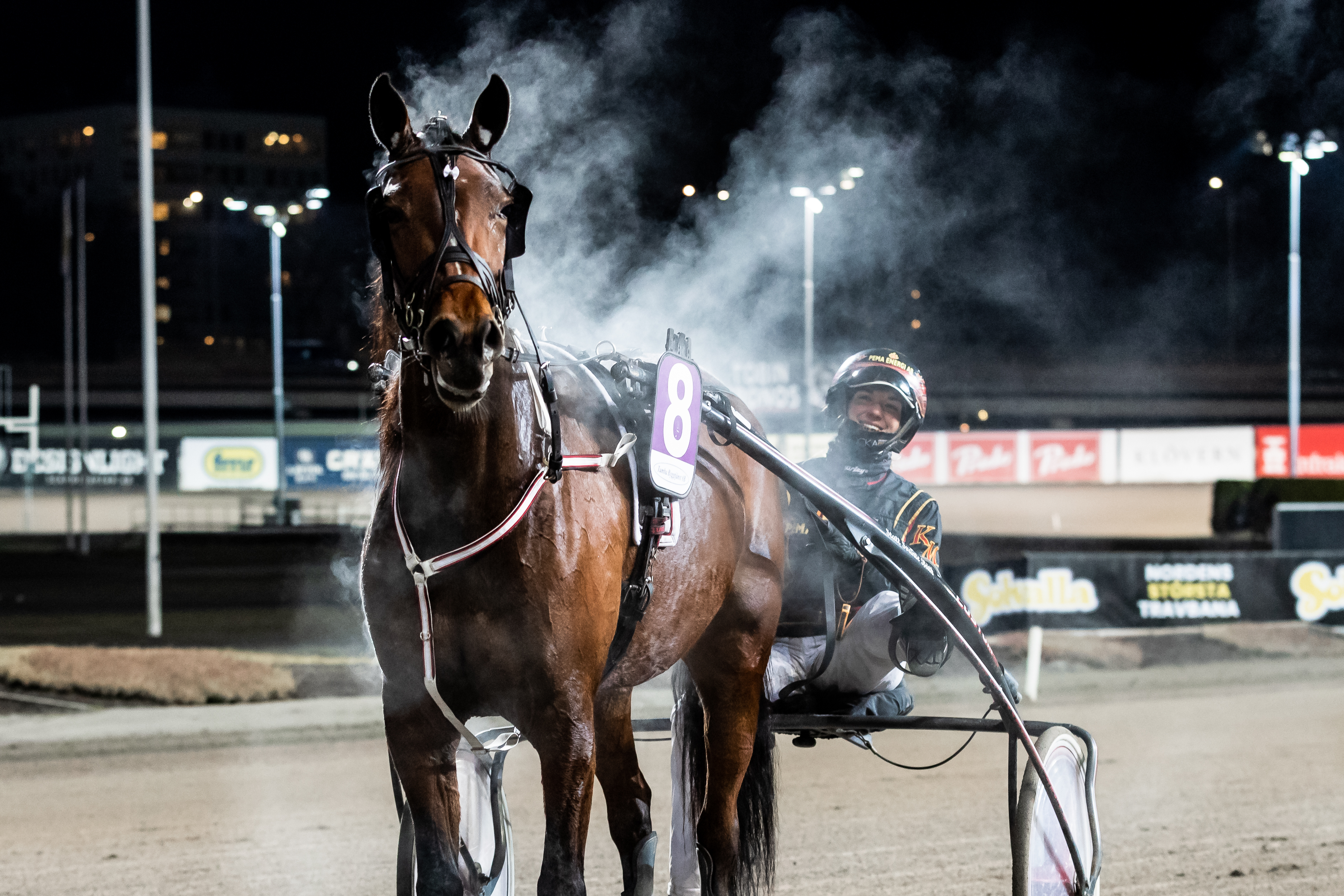 A win percent of 24 last year.
A win percent of 28 so far this year and five wins in 18 starts.
Kim Moberg also got win number 100 of her career behind Quarcia a few weeks ago. On top of all that she has also resumed her monté career thanks to having ridden horses for her boyfriend and thoroughbred trainer Julian McLaren since late last summer.
Life with horses is good for the 24 year old who on Wednesday will be one of the favorites behind her companion Vanja on V86®.
"I really like the setup I have right now and hopefully I can get another win on Wednesday" says the talented driver.

From winning right around every tenth start she made in 2018 and 2019 something happened last year. Kim Moberg won almost every fourth start of the 121 races she drove and this year has started even better.
"Of course you improve the more experience you get and the way to get it is by driving more".
"You're also obviosuly dependant on the horses you get to drive. If you only have a few horses to drive on a regular basis and win a lot, they will also go up in class which will also have an effect on your number of wins".
"Both last year as well as this year I've been able to drive many nice horses which is the biggest reason to my success, but of course I'm proud that I managed to win almost every fourth race I drove last year" Kim says herself about her success.

"The reason why I picked up monté again"
When we reach her she has had a busy day to say the least. In the morning she rode thoroughbreds as a preparation for the license class she will take and after that it was straight off to Solvalla where her boyfriend Julian drove in his driving class to become a harness racing driver.
"It's mostly just for fun that I want to become a jockey and if they just get enough of people entering for the class this spring, the paln is that I will be a part of that".
"I've ridden horses for 'Julle' every weekend since late last summer and that's also the reason why I picked up monté again. It's hard to find the time needed to train yourself for monté when you work all day in the stable and then go to the races in the evenings".
"Training the thoroughbreds has given me that training and when I tried one of our trotters under saddle at the farm I felt very good, so I thought that I might as well just start racing in monté too" says the multifaceted girl.

Has progressed enormously
How did her monté return go? She won, of course. In her first monté race in 6 1/2 years she won with Bastian Boom, trained by her father Svante Båth - a win that made her want more.
"Monté is a lot of fun and a lot has happened during these 6 1/2 years since I last participated".
"When I started racing in monté I felt like there was a lot more accidents and my parents weren't all that happy that I did that, but it feels much more stable now".
"I think that I have an advantage since I've driven a lot of races, even when I compete in monté. I have a lot of experience and my ambition is to race also in monté in the future".
"It would be so cool to win races in the sulky, in monté and as a thoroughbred jockey all in the same year. It's a little dream of mine and we'll see if it can come true" says Kim.

"A real fighter"
On Wednesday Kim will once again take a seat in the sulky behind five year old Vanja, a mare that she has driven in all of her 15 career starts which have resulted in six wins and two second places.
"She doesn't look like much with her short legs, but what a big heart she has. She's a real fighter and the horses who don't have all the right physical features but still find a way to get the job done are the horses who are easy to like".
"There's also a wonderful story behind her. Dad's wife Mia both co-owned and took care of the dame of Vanja - Sofine Cash. She never made it to the races and became a brood mare instead which resulted in Vanja, who Mia also takes care of".
"The same group of people who own Sofine Cash also own Vanja, but things didn´t start so well when Vanja fractured a coffin bone as a three year old and was put on stall rest".
"That delayed her racing career, which is why she didn't start racing until she was four. So her first season on the racetracks was last year and you can tell there is more progress to come from her" says Kim.

"Can race from any position"
She showed both that she is progressing and that she has a big heart when she won her most recent start at Solvalla. The efforts from both horse and driver were five star quality as they caught the leading favorite Voltaire P.Hill, who made a break right at the wire, to take the mare's sixth career win.
"I've always said that she can't leave but last time she surprised me when she grabbed the bit and left pretty well from post position eight. The way it feels, she keeps learning but leaving is nothing we have to worry about from the second tier on Wednesday".
"Starting from the second tier is not a big deal for her though, since she can race from any position. She has raced well many times when she has been out three wide, because out there she can keep an even pace which she likes best, but you can't race her like that every time".
"She is more strong than quick so if we sit in the back of the field and the pace is slow, then it will be tough for her to win".
"In these K500 (apprentice) races there's usually plenty of speed and it looks on paper like it will be again - then she might have a chance to win again" says Moberg.

"Loose lines in training"
The connections have experimented with both shoeing as well as bridles on Vanja throught her career and last time they tried something new again. The result was good to say the least.
"We haven't made any major changes, but in her last start we took her front shoes off and put a can't see back bridle on her which worked out well. Neither was something new since she has raced that way before and she has also raced with a blind bridle several times, but it worked out well and I dont't think we will change anything for this start".
"Generally I think she is one of the better horses in the race and everything is well in training after her last start - Vanja is happy with life. She trots around with loose lines in training and if someone would come out and see her they would never think she could race the way she does" says Kim.

No rush with the training license
Being sort of a Jane of all trades and being as successful as she is, you become curious if there are any plans of walking in dad Svante Båth´s footsteps and become a professional training in the future, but there is no rush with that for Kim.
"I really like the setup I have right now, but of course it would be fun to have my own stable in the future".
"I don't think that's something you should rush, a lot of things have to fall in place for that to happen. First and foremost you need a lot of knowledge and you also need loyal owners to back you up it's not something I feel that I need to rush yet".
"To train a horse and also get to drive it in a race is what I think is the most fun, so being a trainer probably is for me but that's many years away before it's a reality" says the driver/monté jockey with maybe the best form in the country in 2021.