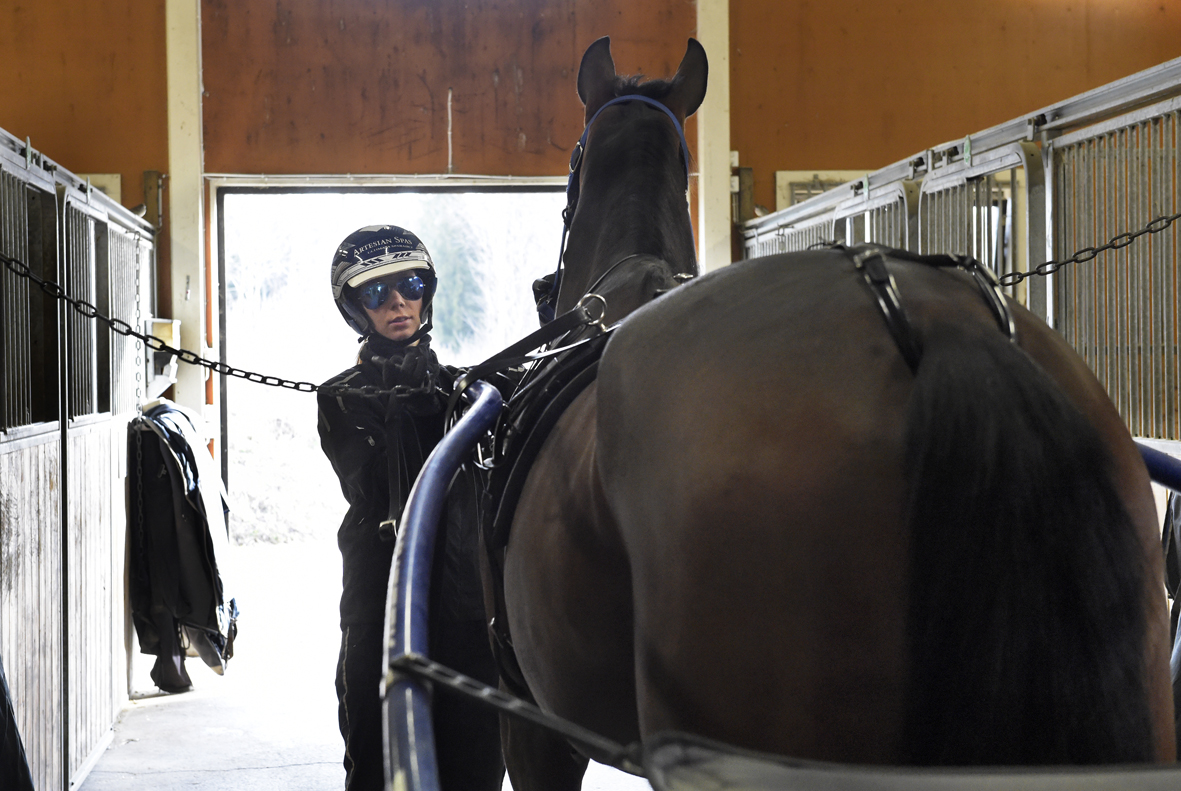 The injury took time to heal.
Then she got sick time after time.
Top mare Green Mamba has gotten three starts in her legs after her long layoff due to injury and she closed brilliantly last time out.
"It was the good old Mamba again!" says trainer Jasmine Ising.

Solvalla licensed trainer Jasmine Ising is focusing on young horses at her stable at Julmyra Horse Center in Heby.
The seven-year-old German-born mare Green Mamba is the oldest horse in the barn.
Two winters ago she made a name for herself after a couple of impressive efforts where the V75® victory at Åby in February 2020 was the most memorable one for many. That's when Green Mamba made up a lot of ground after having made a break and rounded the big 15 horse field out three wide to win impressively.
In the spring of last year, she suffered an injury to a suspensory and hasn't made it back to the tracks until this fall with a couple of tentative starts.
Back in mid-October, the mare closed very well in a V86® race at Solvalla to finish fourth and showed that she is on her way back.
"I have not studied the race closely but with her last effort in mind, I would like to believe that she is back in form and that she is ready to win again. She hit a knee and made a break shortly after the start when Per (Lennartsson) left with her, but she looked great after that" says Jasmine Ising who trains the horses together with her boyfriend Patrik Fernlund at Julmyra Horse Center.

Often sick
Green Mamba was sidelined for a long time with an injury to a suspensory. Once that was healed and she could resume training she has gotten sick several times. Jasmine Ising has been satisfied with how the mare has felt in training...
"Every time I thought she was getting ready to race she got sick again. We have had a lot of that in our barn and she has been sick the most, so she must have a bad immune system".
After her last start, she has also been scratched sick?
"Both Lennartsson and we have been happy with how she has felt and how she has acted. She has been happy and alert and has shown that she wants to race again. But yes...then she got sick again. The feeling we got after her last start was that 'she will win her next start'. But she caught a little cold this time and was only off for a week and after that, she has trained as usual and has felt very good. I think she is back in form again" says Jasmine Ising.
On Wednesday she starts in a race for mares at Solvalla (V86-6) and as of December first, all horses must race with shoes in Sweden. Is that an advantage for Green Mamba?
"She has enjoyed racing in the wintertime. Even if she is better when she can go barefoot upfront, I think that most horses who have to race with shoes on are at a bigger disadvantage than she is. Winter and having to race with shoes don't affect her as much as her opponents, I think".
What are your thoughts on this start? Do you think she is ready to fight for the win?
"I think so. I have a positive feeling. She should get a decent trip from post five. She trained a slow heat last Thursday and was good. On Monday she will just go some slow intervals on the straight track".
In V86-4 you have 6 Luca Vialli Boko racing. Is it right to call the three-year-old gelding a problem child?
"I don't know if maybe he is feeling the Ready Cash-blood in his veins. If maybe he has realized what he is supposed to do on the track and gets nervous because of it. He has made a lot of breaks and he needs to get back on track so to speak. If he does, he has shown that he is good enough. Post position four in volt start is not a good post but he has a horse to follow when they turn, which I think will help him relax. We are changing his bridle from can't-see-back bridle to open for this start. Two starts ago Per was very puzzled, he said 'he feels better than ever and then he just makes a break'. But it should be all about him maturing".
Is he the dark horse of the field?
"Green Mamba should have a better chance. But if Luca Vialli Boko minds his manners he should have a good chance too. If I was a bettor I wouldn't single any of them on my ticket, but I also wouldn't leave either of them off my ticket".