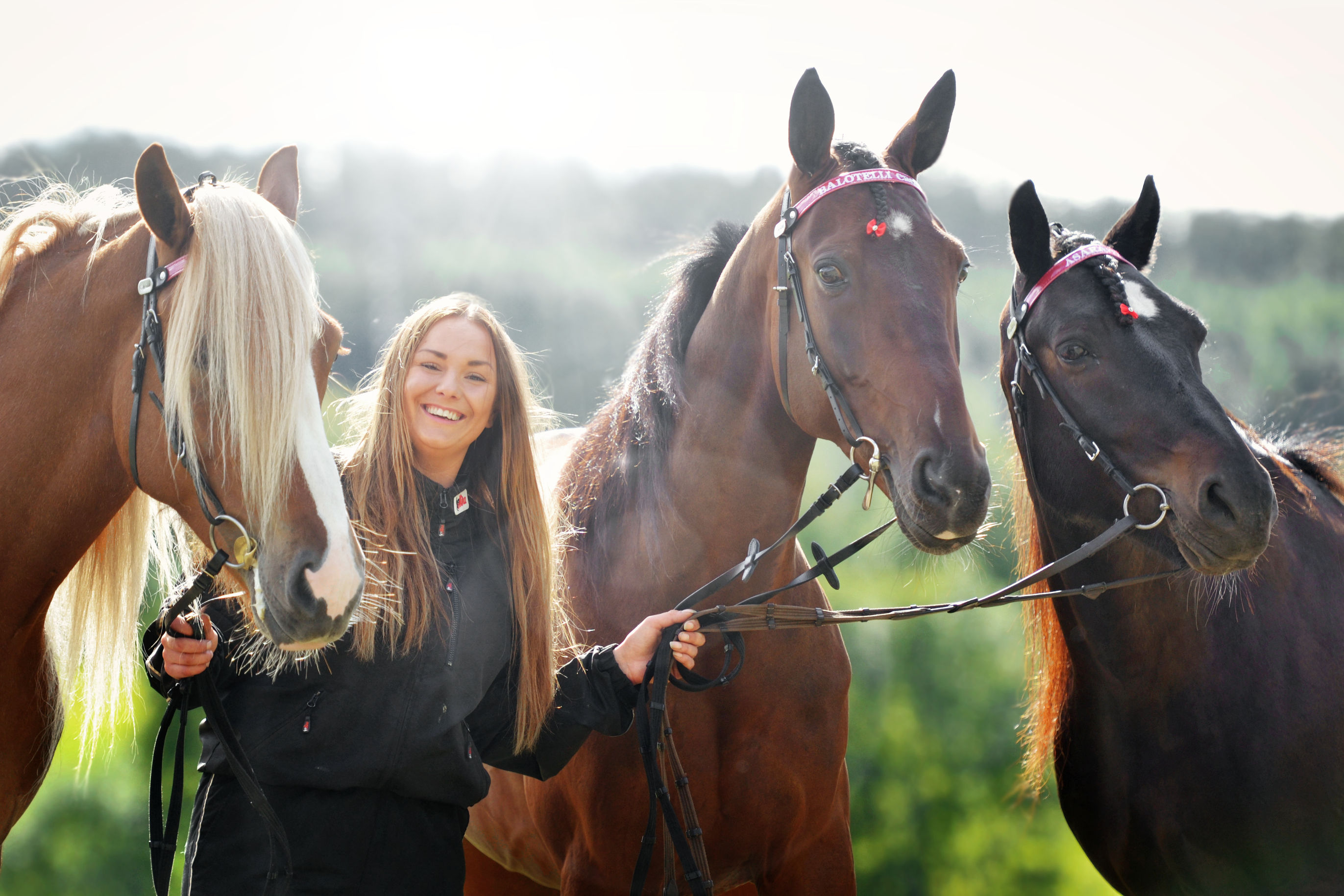 V86®: Lina has a horse with a sense of humor

The third place on V75® a couple of weeks ago is her biggest accomplishment so far.
Lina Tallberger trains at her farm in Kovland just north of Sundsvall where her best horse Balotelli Crown has shown form that should take him far on this Wednesday's V86®.
"He wasn't tired as a crossed the finish line in his last start, in fact he was so fresh we had to pull him into the barn so he wouldn't take off!".

At age seven she started at the riding school and after having competed in jumping while growing up it's now all trotters since a few years for Lina Tallberger. She owns and co-owns ten horses - both warmbloods and coldbloods - and she trains them all on her own at her farm in Kovland, north of Sundsvall.
Things have gone well lately. A third place on V75 at Skellefteå with Balotelli Crown in the bronze division was followed by a win in a monté race with Myrsjös Ruter Ess at the same track.
"Yes, it feels like we have to get out there and race, now we're in such good form!" says Lina Tallberger.
"It feels like I'm doing the right thing with the horses now and I've settled in here at the farm that I bought back in January. I guess it takes a while before everything comes together".
Balotelli Crown is capable but a bit tricky at times and he has made a lot of breaks throughout his career. Lina bought him as a yearling at the Kriterium sale at Solvalla and she has been around him every day since.
She paid SEK 20,000. Now he has made SEK 600,000 in earnings at age seven.
Balotelli Crown's win in a V86 race at home at Bergsåker in February 2017 was for a long time what she called her biggest accomplishment on the racetrack. In V75 at Skellefteå he finsihed third in the bronze division.
Lina thinks that tops all of her horse’s wins.
"They set a new track record in that race at Skellefteå and the fact that he trotted so fast (1:11.5) and crossed the wire without being tired is great I think. Susanne Osterling said she had a ton in her hands and she didn't even pull his earhood".

Had to pull him into the barn
With ten horses to train Lina gets help from her boyfriend every other week as he works part time as a truck driver.
He was with her in Skellefteå when a fresh and excited Balotelli Crown didn't want to go into the barn after the race.
"We had to walk on each side of him and pull him into the barn after the race so he wouldn't take off. He was so fresh! Wow what a good shape he's in right now. I've trained him lightly a few times after that and he's very happy" says Lina.
Balotelli Crown has needed these years to calm down and become more stable. Lina Tallberger tells us about a set up with some special training.
"We have worked a lot on improving his self confidence. Emilia Leo who has driven him many times said that he was like a new horse when she drove him this fall. "He's tough enough to race on V75 now" she said. He doesn't give up until the tank is empty now and we can always trust that he will give all he's got in each race".

"Pretends to be dangerous"
Balotelli Crown is a horse with a sense of humor we are told. Humor?
"Yes he has to get to play around and he decides how fast we are training and things like that. He swishes his tail and tries to look dangerous as if he's going to kick. But he's not dangerous, he just thinks it's fun if he can scare someone" the trainer says.
On Wednesday the humorous horse will race in a middle distance race (V86-7) at his home track Bergsåker. Susanne Osterling is once again in the sulky and they will start from post position five behind the gate. He's raced best when a female driver has driven him. He's a bit sensitive and he doesn't like when you grab into him too much. Girls are usually not as strong and a little bit softer towarrds him".

Plays around behind the gate
The fact that Balotelli Crown started out pacing and even galloping shortly before the start in Skellefteå doesn't worry the trainer.
"He usually does that. When Hanna Forslin won with him a couple of starts ago he did the same thing but he always finds the right gate before the race starts. I think he will joke around with us again but behave once the race starts. He's not nervous anymore and he has gotten better since I took his overcheck off".
Any news when it comes to equipment for this start?
"No, he will go with the same equipment he did in his last start. He wil race with shoes, a pull-off earhood, a pull down bridle and he will race in a hybrid sulky".
What do you think of the race and his chances to win?
"There are a few good ones in the race. But we have a good horse too. I think the bettors need to use him on their tickets - because this horse can do it all sometimes".