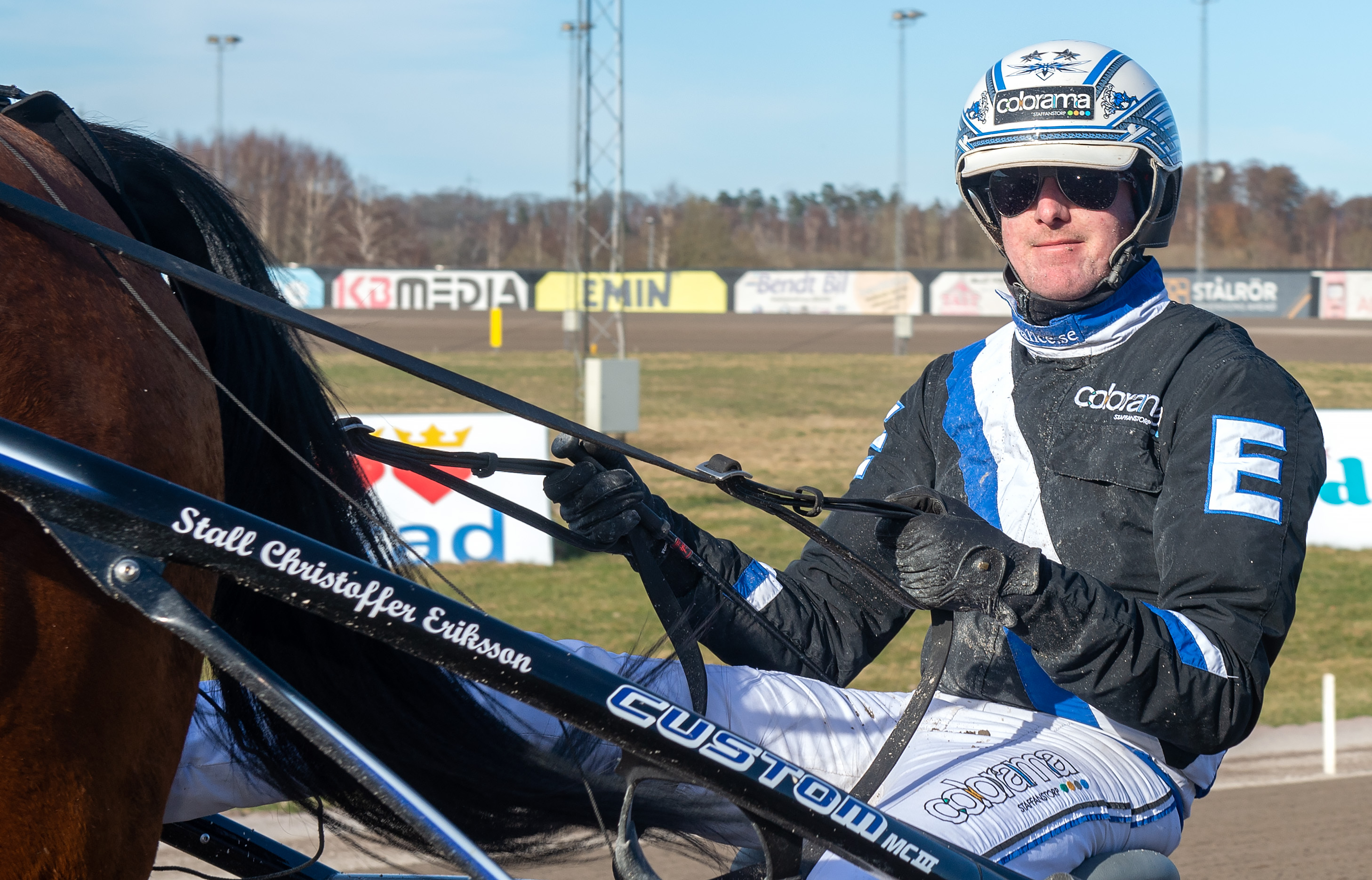 He surprisingly made a break as the big favorite in V75® in his last start.
Rackham is now seeking revenge in Wednesday's V86® – which is boosted by a super jackpot.
"I had him too geared up before the start last time and that's why he made the break. I will score him down a bit easier this time and I don't think that will happen again. It looks like a very good chance to win" says Christoffer Eriksson who also puts out a warning for another V86 starter.

Jägersro and Solvalla are hosting this week's V86® which comes with a super jackpot. A sole winner can take home SEK 30 million with all eight winners picked and a guy who might be worth listening to is Christoffer Eriksson. The Jägersro licensed trainer has already set a new all time high when it comes to earnings as a trainer. The stable is closing in on SEK 5 million and the previous record SEK 4.4 million is already surpassed by SEK 500,000 with two months left of the year. The best horse in the stable, Rackham is a big part of those numbers. The multiple V75 winner has earnings of SEK 737,500 this year and he is on his way towards the gold division. After two straight V75 wins he finished second to Admiral As in the final. In the following start he raced against some of the best five year olds in the world at Åby and finished fourth behind stars like Extreme, Aetos Kronos and Don Fanucci Zet. But in his most recent start, Rackham made a break as the big favorite in a V75 race at home at Jägersro. It is very rare for the capable chestnut horse to make breaks, but Christoffer knows the reason.
"7 Rackham (V86-1) got a bit too geared up before the start, last time out and it was my fault. I tried to wake him up so that he would leave the gate better. He got too fresh and made a break behind the gate. I don't think it will happen again and I will score him down a bit easier so that he won't get so geraed up. He looks good in training and everything seems fine. He felt very good when I trained him this past weekend" says Christoffer Eriksson.
What do you think of this start with post position seven behind the gate over the short distance?
"He is pretty far out on the gate but on the other hand it's not that big of a field. There are several quick leavers inside of us which means I can take an easy start form the outside. Hopefully the ones inside of us will leave fast and drive on for a bit and then once they pull up I can make my move".
"I think I have the best horse in the field and normally he should have a really good chance to win. Racing is racing but like I said I don't think he will make a break again, he usually doens't. He is in it to win it and I will drive accordingly. He needs a start before V75 at Jägersro on November 20, which will be his next start. No changes, he will race barefoot all around again".
"After that start I am actually aiming for a race in France in the middle of December with him" says Christoffer who last week had great success at Vincennes in Paris when Ingo won for Alexandre Abrivard. A victory worth almost SEK 200,000.
"He was great when he won and he remains down at Grosbois. His next start is on November 19. But Rackham will go back home after his start".
What are your thoughts on your other V86 starters?
"2 Thrust Control (V86-1) has had some bad luck but he has raced well without getting a win. He drew well here and has to save ground and try to close well. I don't think he has any big chances of winning and he will race for a check".

"A good three year old filly – has won in 1:12.2 on the middle distance"
"5 Seventh Heaven (V86-5) is a good three year old filly who won in 1:12.2 on the middle distance this past summer. She had a good period there but after that she has had some bad racing luck and she has made some breaks behind the gate. She last returned after some time off and finished third in 1:13.8 and she needed that start. She looks better after that start and she drew well and can leave fast. If she gets a good trip I think it looks good for her here".
"She has already made SEK 500,000 and but I think it feels like she could have made twice as much. It feels now like she is back in the same shape she was in during the summer and I hope she will have another good period from now on. It looks interesting for her on Wednesday and she should be considered a win candidate. No changes, she will race barefoot all around" says Christoffer Eriksson.