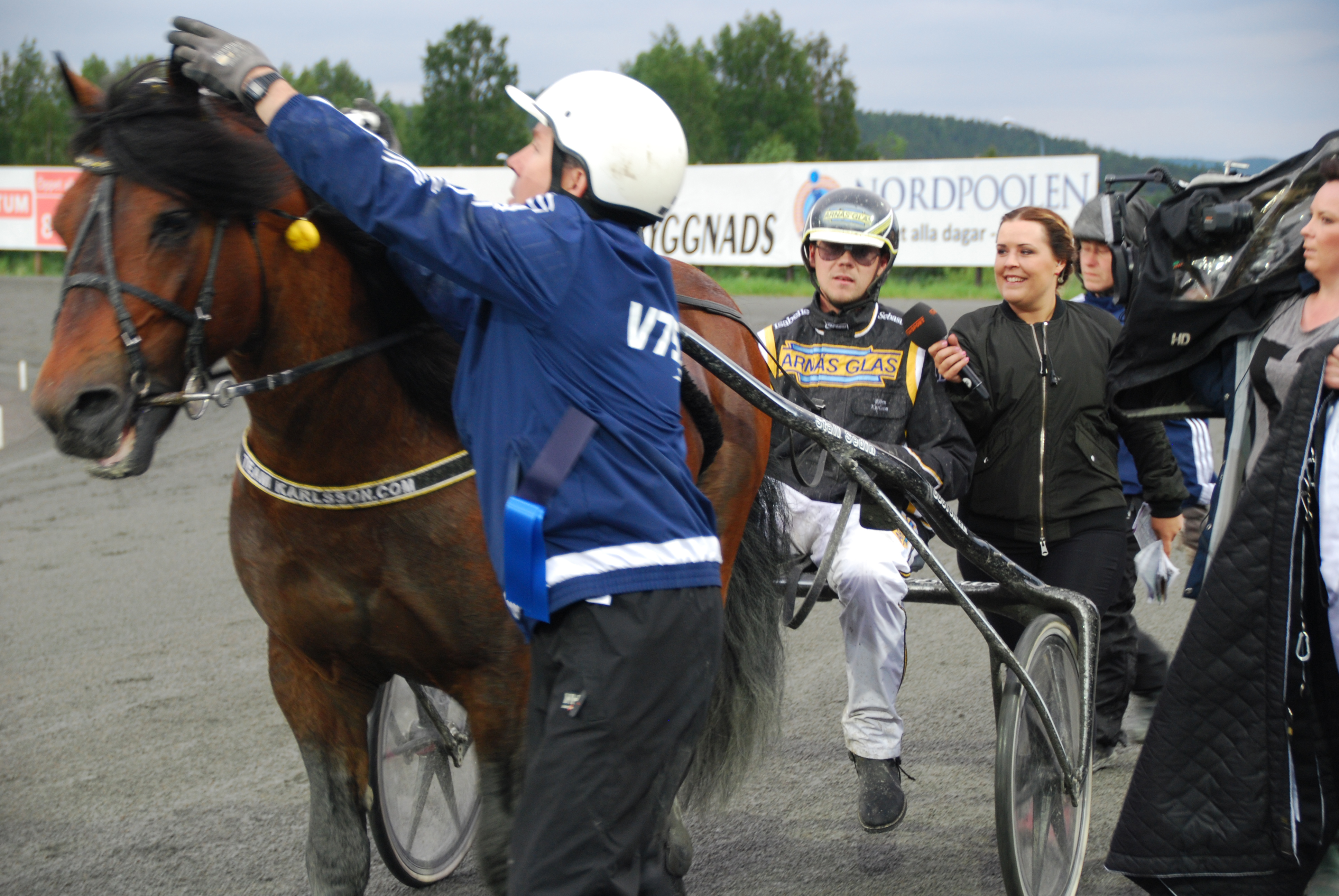 Björn Karlsson's coldblooded trotting star Tangen Haap is making his seasonal debut on Wednesday.
Everything is as usual going into V86® at Bergsåker.
The Solänget licensed trainer lays low despite the fact that the soon to be a quadruple millionaire (SEK) has won his seasonal debuts the last seven years.
"Since he came up in these higher classes I've been surprised almost every year when he's been able to come out and win right off the winter break!"

In the third leg of V86 on Wednesday we will get to see Örnsköldsvik's contribution to the coldblood elite back on the racetrack in a race where horses and geldings start with a 20 meter handicap on the mares.
The twelve year old Tangen Haap is the best horse in the field but the trainer lays a bit low. His horses lacks racing speed and is now facing horses who have raced all winter.
But that hasn't stopped Tangen Haap in previous years. The coldblood star is usually happy to be back on the track after the winter break and usually races on pure happiness.
"I know that the stats are in his favor and my horse feels very good. But I want to lay a bit low when it's his seasonal debut. We've had terrible training conditions here in March, it's been cat shit - and there are too many negatives for me to really believe in him. He might need a couple of starts" says Björn Karlsson.
The twelve year old is one of Swedish racing's poster boys with well known owners (ex hockey pro twins Henrik and Daniel Sedin) and he is trained by Björn Karlsson at Solänget in Örnsköldsvik.
A small trainer competing with the big stables who in 2019 together with his star trotter won the biggest race for the older coldblood elite - Elitkampen at Solvalla.

Successful seasonal debuts since 2014
Tangen Haap has been good since he was young but has stood out more as older.
His win percent is 40, after 42 wins in 105 lifetime starts. In his debut as a three year old in May 2012 at his home track Solänget he made a break and was disqualified. In his seasonal debut 2013 he was too geared up again and he once again made a break and was disqualified.
After that his seasonal debuts has all been successful. In 2014, 2015, 2016, 2017, 2018, 2019 and 2020 Tangen Haap has been victorious.
Before his seasonal debut last year Björn Karlsson was a bit optimistic. Tangen Haap had been good in the last training heat.
"Now it feels more as usual. We've had such bad training conditions this past month. March has become a terrible month for training as the winter ends. We had winter conditions until the end of Fabruary and after that it's been a mix of ice and gravel on the tracks. It's been cat shit" says Björn Karlsson.
The thing is that Tangen Haap isn't the easiest horse to train into shape. Karlsson says that the horse is so smart that he knows not to get too tired when he's just training.
Usually Tangen Haap gets sharper training trips before three or four starts a year, not more. Four times a year he gets sweaty under the harness, the rest is just play time.
"Then I know he will be real good with that setup. Going into the other starts he gets his usual training to stay sound all year and that means a lot of walking and slow training. Same thing this year. So I'm very uncertain of his form".
You usually say that the horse races on pure happiness so that must be one thing in his favor on Wednesday?
"That's right. I just have to hang on!"
Tangen Haap will start from post position five in volt start, 20 meters behind the two mares on the starting distance.
"They're all good horses. He has no problems with volt start and he always leaves quickly. Usually he's the one who calls the shots when he returns off a break. If he grabs the bit and wants to go forward, then I won't fight with him. I'm pretty sure he will be the quickest one away from his distance, but I don't know what the two drivers behind the mares on the starting distance have planned. Does Lars-Erik want to set the pace upfront with Alfie or does he want our cover? I guess we will see on Wednesday".
Last year Tangen Haap finished fourth in Elitkampen and that race must be one of your goals this year as well?
"Yes, Elitkampen during the last weekend of May and Nordic King in Finland during the midsummer weekend are the two most important races this year. If he is good on Wednesday we will race at Bergsåker a month later and then there's another month until Umåker who got their V75 day on Saturday May 15 this year. Then we have Solvalla after that if everyhting goes well".