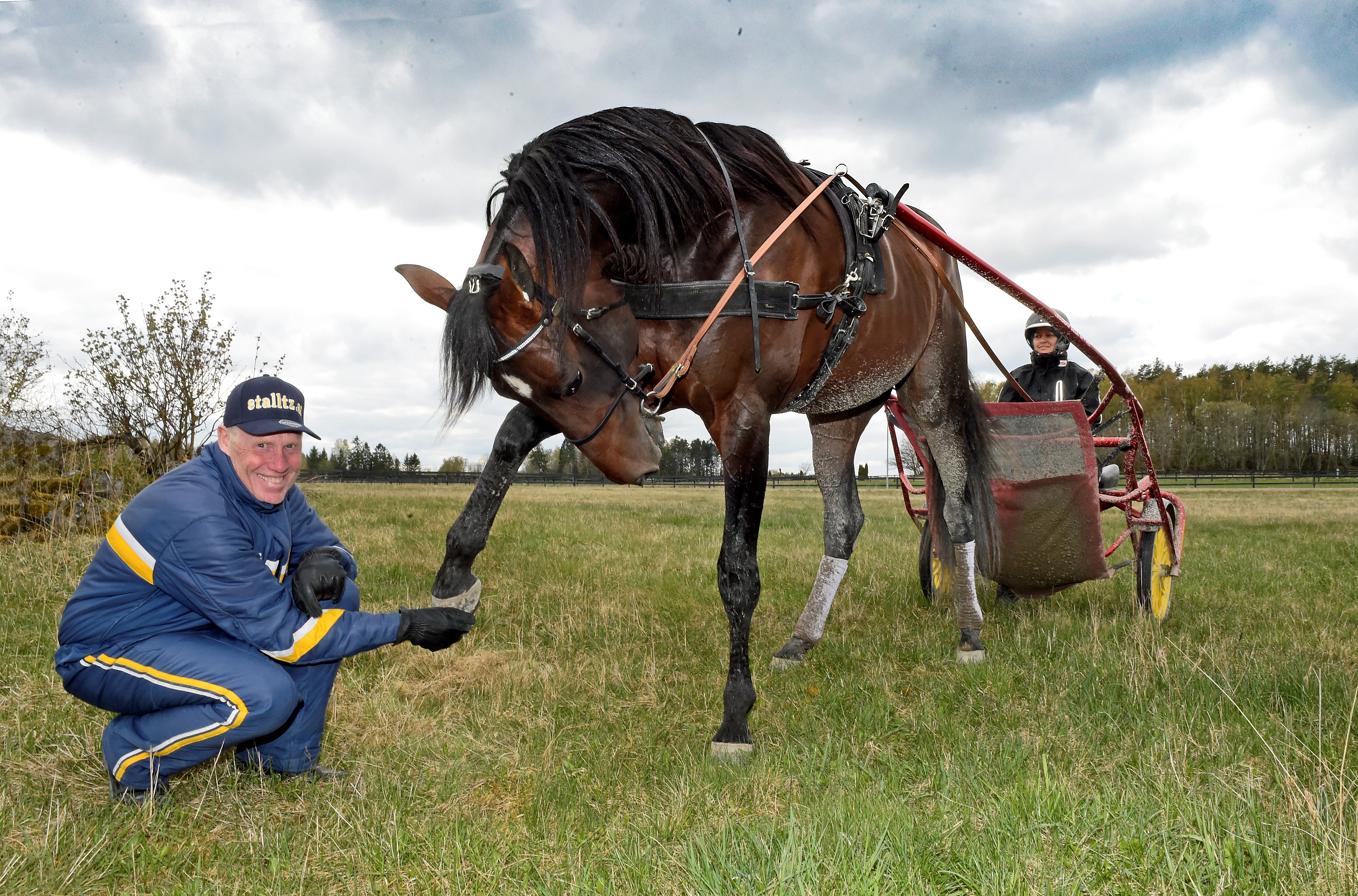 Solvalla offers a great race card on Wednesday and a super race will close out V86®.
Green Manalishi is back after the failure in the King's Trophy and Stefan Melander lays low with the dollar millionaire.
"He will get a nice trip this time and save the speed for the finish. Our next big goal is the Sprint Championship" says 'Tarzan' and gives us another winner on V86.
"Slippery Runway is my best chance on V86. And Evaluate trains like a demon".

The stars are out on Wednesday night at Solvalla and there are several great races on V86®. The best one will close out V86 and in Prix Readly Express a star trio will face off. Aetos Kronos, Don Fanucci Jet and Green Manalishi are the top four year olds who will battle for the first prize of SEK 450,000. Both Aetos Kronos and Don Fanucci Jet were lucky in the draw and they will start form post two and three. Green Manalishi wasn't as lucky and will have to start from post position nine in the second tier. After having great success on the other side of the Atlantic ocean with Marcus Melander, the horse made his European debut and first start for uncle Stefan Melander in the King's Trophy elimination. After a great effort where he finished second after being parked first over, the bettors made him the favorite in the final. That day was ruined when he made a break already in the start from post position five.
"9 Green Manalishi (V86-8) wanted too much in the start and that was unfortunate. Things like that can happen, that the horses get too worked up. Someone had timed him in 1:10.8 in 1,900 meters after the break and he was very good. So it was very unfortunate that he would make a break" says Stefan Melander.

"Feels very good - aiming for the Sprint Championship"
There were some talks earlier that Green Manalishi would race during the Elitlopp weekend and most likely in the four year old elite race. But instead he has trained at Stefan Melander's farm in Enköping.
"Neither Elitloppet nor the four year old elite was an option. The next big goal is the Sprint Championship and the big goal of the year is the Swedish Trotting Derby. He has trained consistently twice a week since the King's Trophy and he feels good even if he hasn't trained any faster heats".
"It was very good of him to finish second in his elimination after not having raced for six months and a long trip from USA over here. There was a lot of things that were new to him that time and he has shown that he's a very good horse. He takes very long strides and he is super cool. You can't tell how fast you're going with him and I have compared him with Uncle Lasse and Scarlet Night when it comes to that" says 'Tarzan'.

Wants to give him a trip - not his optimal equipment
But for the race this Wednesday he lays a bit low regarding Green Manalishi's chances. It doesn't sound like they expect him to win from post position nine and they want him to get a nice trip this time and use his speed at the end. He will not go with his optimal equipment and shoeing either and 'Tarzan' wants his horse to be in top form when the big races come".
"I'm actually pretty pleased with the post position and he will get a nice trip here and at the end. It's a very good race with three top horses and I think all three of them will be Elitlopp horses in the future. I think one of Aetos Kronos or Don Fanucci Jet will win. Or actually, I think it will be Daniel's horse".
"Björn was supposed to drive again but he has a horse from his own stable in the race. Jorma is not a bad stand in, being the winningest driver in Scandinavia. All races are important but this race is not the most important one for this horse. I hope he will be in top form for the Sprint Championship which is next big goal".
Which type of shoeing and equipment will he race with?
"He will race with shoes all around, open bridle and a regular 'Jorma'-bike. We will save the blinds, the feet and the American sulky for next start".
What about your other two horses in the race, Surf'n Turf and Rally Hans?
"They have raced very well and both are in good form but they are just racing for checks here. They can't beat the best horses".

Upset warning: "He trains like a demon"
Stefan Melander has a bunch of interesting horses on V86. He gives us one winner and one upset warning.
"5 Evaluate (V86-1) hasn't had any luck this year but he actually trains like a demon. Jepson was happy with him in his last start but the pace was low and it was impossible to make up those lengths in the end. When Björn drove him he made a break and he did the same for me in the start prior to that. The horse is in very good form and might have a small chance. I would say he could upset here".

"Has found another gear barefoot - he's a winner here"
"1 Selcal (V86-2) was very good when she won after having gotten a nice trip in his last start. It was a cheap race and even if the post position is good now it will be hard for her to win. This is a tougher field and I'm happy if she gets a check".
"5 Slippery Runway (V86-4) feels very good and I believe he could be the winner. It feels like he found another gear after we started pulling his shoes. He trotted 1:12.5 in his fifth start and he's very good for his class. According to the groom Emilia was very pleased with his last start too. He can leave fast and he drew a good post position. He is my best chance on V86 and he will race barefoot again".
"4 Click Bait (V86-5) is a fantastic horse who has raced incredibly well lately. In his last start he finished second to Ecurie D. and in the start prior he was third in the King's Trophy. We're aiming him for the Sprint Championship and he needs a start before that. He's in against older horses this time and I don't think he can beat Very Kronos if that one stays flat. I lay low with Click this time and I just want to get him a start before the Sprint Championship. He has big front feet and will probably race without shoes upfront but I think I will take the blinds off and race him open this time".
"12 Rotate (V86-6) was good in his last when he finished second and he's in his way up in form. He's been a terrible disappointment earlier.  I thought he would be considerably better than the class he's currently in. He won't win from post position twelve and he's racing for a check".