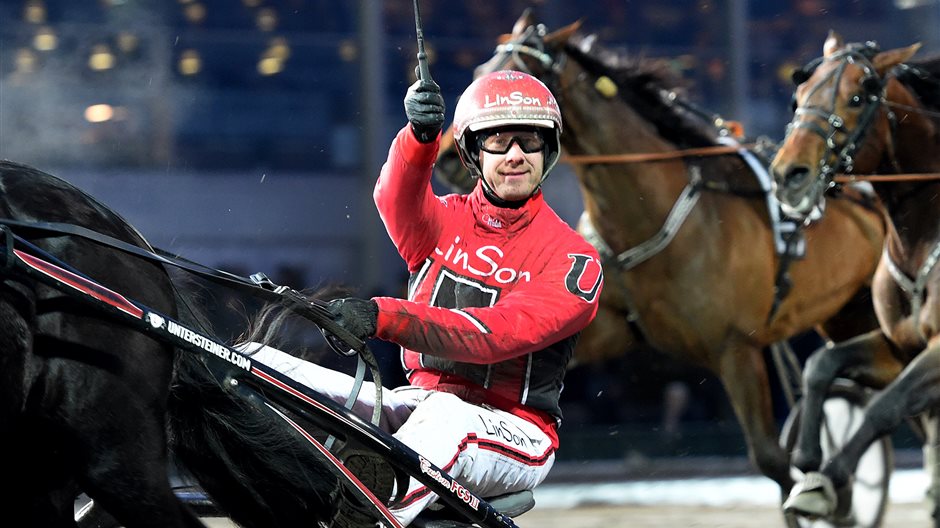 On Wednesday night Cyber Lane is back at the racetrack.
But the derby winner had bad luck in the post drawing and got number 11.
- I don’t think he should be favorite under these conditions, trainer Johan Untersteiner says.

There has been five weeks since Cyber Lande (V86®-8) won the Swedish Derby after one of the most dramatic home stretches in the history of the race. Cyber Lane was in front the whole race but on top of the stretch he seemed to be beaten.
“It was really an exciting home stretch and I believe the spectators liked it. With 200 meters to go it was anybody’s race. Anybody’s but Cyber Lane’s, Johan Untersteiner says.
”Jorma (Kontio) just cruised pass me with Global Trustworthy and in that moment we were beaten, but then we got lucky when my horse found his gate at the same time that Jorma couldn’t chase his horse without him going of stride. So we got back in the game and my horse did a heroic effort when he managed to win.”

“Pleased with him”
The next big goal for Cyber Lane is Breeders’ Crown and he is already qualified for the semifinals at Solvalla on October 29th.
“After the derby he got to rest for a bit and after that he has been training as usual. He was in to the track last week and I was pleased with him so now it’s time to race again, although he’s not in quite as good shape as he was before the derby. Also he got a bad post and his worst opponent got post 2, so it’s obvious that it doesn’t seem to be his race this time.”

Has won 12 out of 15 races
The opponent Johan Untersteiner is referring to is Policy Of Trouth. He als races in the Swedish Derby but got boxed in and crossed the finish line with a lot of power left.
“We will see where we end up after the start but it would be almost impossible to go around the field and beat Policy Of Trouth from the outside, so a believe I will give my horse a pleasant journey behind horses and let him go at the end.”
Cyber Lane races barefoot in the derby but on Wednesday he will trot with shoes on all four hoofs, like he has done at ten out of his twelve victories.
“When you’re up against the toughest horses in the biggest races you want to pull all gears there is, but I can’t really say that he is better without shoes. This time he will race with very light aluminum shoes on his front hoofs for the first time. He has been racing with iron shoes earlier.”
The conclusion we can make is that Johan Untersteiner is satisfied with his horse but think he will have a hard time winning this time. But still, with a horse that has won 12 out of 15 races you can’t throw the towel in advance.
“I never feel beaten when a leave the barn with this horse, but the task seems tough this time and I don’t think he should be the favorite under these conditions.”