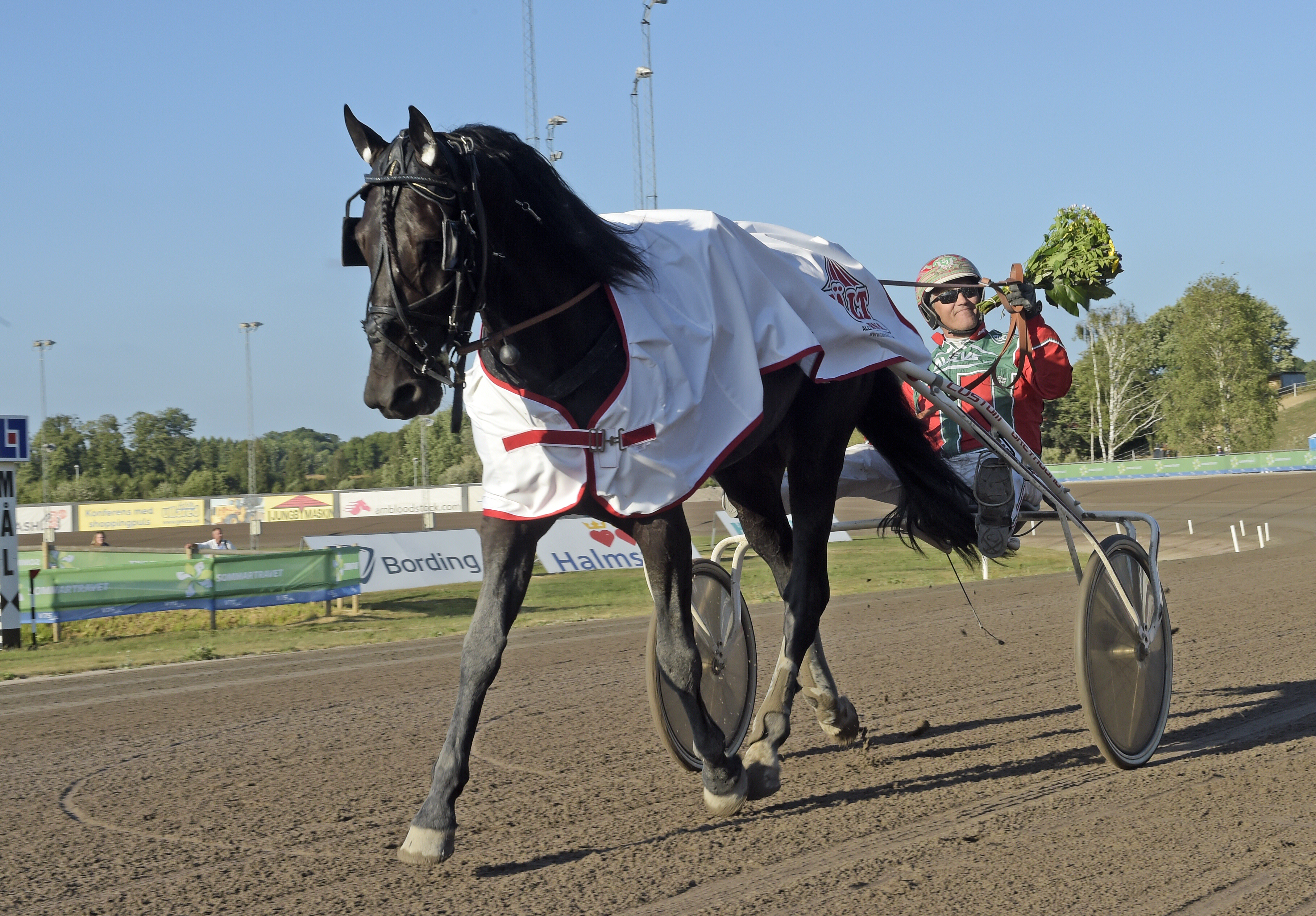 He is the Danish winning machine who won 32 out of 38 starts for his former trainer Steen Juul.
After having been in training in France for some time Bandit Brick is now back on Danish soil with his new trainer Jeppe Juul.
He is chasing a new victory this week on V86®.
"Bandit Brick is one of the horses who can win the race. He will race barefoot for the first time in my training" says Jeppe Juul.

V86® this Wednesday is split between Jägersro and Solvalla. At the former track a well known name shows up in the program. Bandit Brick is the winning machine who ran through the classes a few years ago for his former trainer Steen Juul and he also won on V75. But despite having won 32 out of 38 starts the horse was moved from Steen Juul in the end of 2018. The owner wanted to try him in France and sent the horse in training to Björn Goop where he only raced once without any success. Bandit Brick was then moved to Jean-Michel Bazire where he won once in three starts, at Vincennes in June of last year. It was also that summer the horse went missing in action. Following an injury Bandit Brick was shipped back home to Denmark to Gitte Madsen for rehab. And since the beginning of this year he is in training with Jeppe Juul.
"Bandit Brick (V86-7) did well for Bazire but got injured with a bowed tendon, which is a serious injury. He was turned out to rest at first and after that he was sent to Gitte Madsen for rehab with laser treatments and also training on an aquasizer - an under water treadmill. He was away from racing for pretty much a year" says Jeppe Juul.

"Has been slow to get back - feels looser and better now"
Bandit Brick has made five starts for his new trainer since he returned earlier this summer. He has purposely been raced in cheaper races and he has won two out of his last three starts.
"I have had the horse for eight months and he has been slow to get going. But he gets better and feels looser with every start. I was a bit disappointed in him in two starts ago but he scoped sick after that. So even if he finished third he wasn't at his best that day. In his most recent start he felt better again and won in a good time. He has left well and has taken the lead in every start lately".
"He is getting close to the form he had for Steen Juul. But one has to consider that he is racing in the open class now as opposed to racing against horses who had made under SEK 500,000 back then. He is also older now and he needs a better trip nowadays. He is not training very hard in between starts due to his old injury. The plan has been for him to race back into shape again" Jeppe Juul explains.

"The trip decides if he will finish first or fifth"
On V86 this Wednesday Bandit Brick will start from post position seven behind the gate in the seventh of the eight legs.
The distance is 1,640 meters and Jeepe Juul is driving himself. He will not try to blast out from post position seven but instead Jeppe announces a very interesting shoeing change.
"If the track is good and there's not too much rain he will race without shoes. He hasn't raced barefoot all around in a long time and it will be the first time in my training. He will race in a regular style sulky and with can't see back side rolls as he has before".
"We lost the draw and even if he leaves quickly I don't want to blast out. I think we have to race from behind this time, going for the lead will cost too much from out there. I think the trip will decide if he will finish first or fifth. But I definitely think he is one of the horses who can win the race" says Jeepe Juul who trains 40 horses in Ålborg, Denmark.